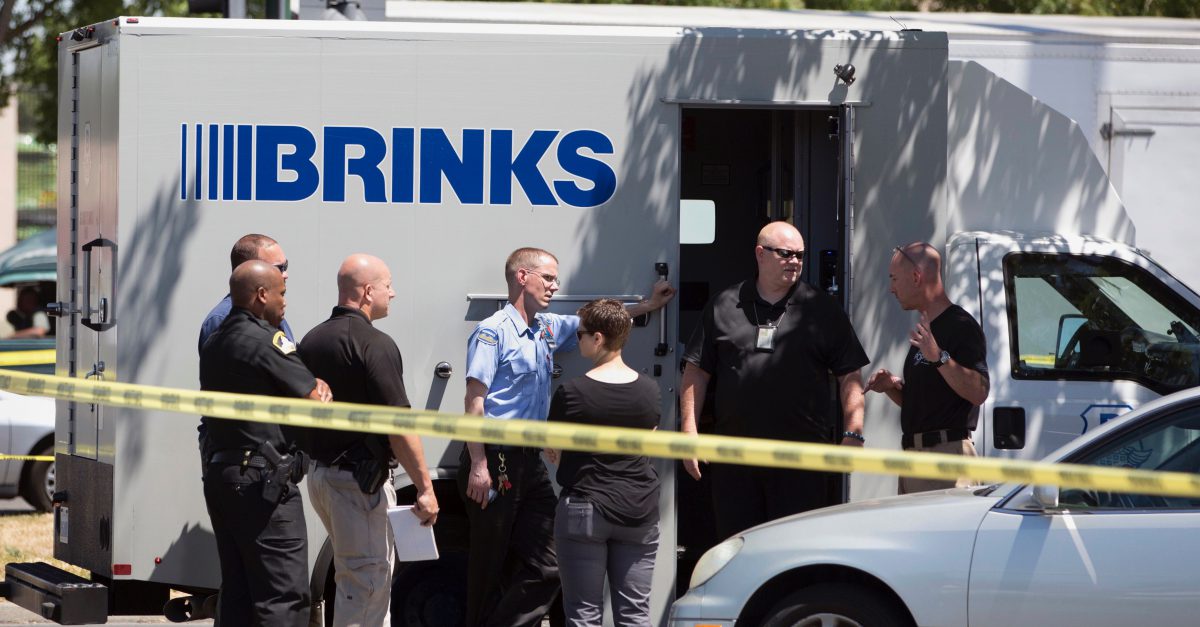 AP Photo/Rich Pedroncelli
Authorities look over the armored car at the scene were a shootout occurred between an armored car guard and suspected armed robber, Friday, July 8, 2016, in Sacramento, Calif. The Brinks Inc., armored car guard was leaving a Golden 1 Credit Union branch with a bag of money when a masked man armed with a handgun approached on foot. Both were wounded in the ensuing shootout and taken to a nearby hospital. (AP Photo/Rich Pedroncelli)

Houston police officers found a burning body they believe to be a suspect in a daring daylight armored car robbery, which reportedly netted over $1.3 million in cash.

Police said they found the body of Robert Freeman, 28, near a dirt road in southeast Houston, burned, but police did not disclose how they identified the suspect.

Freeman is said to be one of three suspects in an armored car robbery on December 26.

Reports show Garda armored courier pulled up to the Frost Bank at 9300 Kirby Drive as part of its normal route; the three men including Freeman, 20-year-old Davione Owens, and 25-year-old Denzel Miles, reportedly robbed the truck and got away with $1.387 million in cash.

Two days after the robbery, police said they arrested Miles at his home, where they found a gun and $14,000 in cash.

The apprehended suspect reportedly worked for Garda and knew the route he expected the truck driver to take. His employer said he fired Miles in October 2017 for refusing to cooperate with an internal theft investigation.

Miles also admitted to stashing $396,000 at an apartment in southwest Houston.

He further identified Owens and Freeman as his accomplices.

Owens reportedly then went to Freeman’s apartment and told a woman staying there he planned to leave the U.S.

The Harris County Medical Examiner’s Office is not yet releasing a cause of death for Freeman.

Pending those results, no homicide charges are filed regarding Freeman’s death at this time, either on the two accomplices or on any other parties who may be involved.

Authorities are also reportedly searching for Freeman’s share of the stolen cash, estimated to be around $400,000.