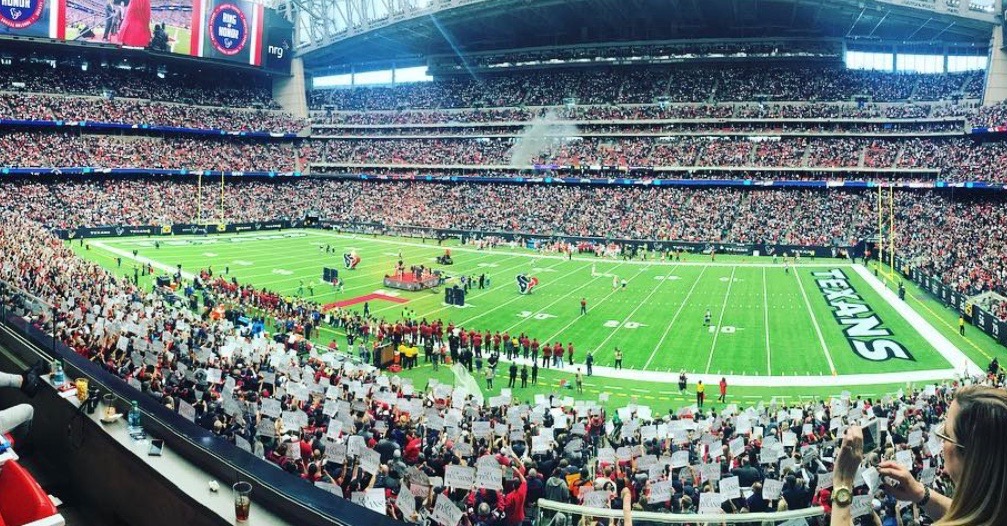 Houston made sports history again over the last week with the inauguration of the franchise’s Ring of Honor.

On Sunday, November 19, Houston celebrated Andre Lamont Johnson Day, the Texan’s all-time leading receiver, by inducting him as the inaugural player to the Texan’s exclusive club, which he earned by playing 12 of his 14 seasons with the NFL on Parade with the Bulls.

RELATED: History earned – a city, a team, and the trophy decades in the making

According to his player profile, Johnson joined the team in 2003 after it expanded to Houston, where, over the next 12 seasons, he helped make the Texans into the team they are today, earning a reputation for being the Texans’ best player of all time — so far.

As Johnson enjoys this new honor, some Houstonians may remember how he is no stranger to the spotlight:

After being a first-round draft pick, he garnered national attention by helping to establish the newly-created Texans franchise a fierce competitor in the League.

During his time with the Texans, he earned seven Pro Bowl honors, two-time All-Pro.

He also made an impact off the field in Houston, known to give back to the community through charitable work he he continues to this day.

Johnson flashed a smile, as the city he said he loves came together to honor his contributions to his team, sport and community.

Celebrations rang out in NRG Stadium during halftime against the Arizona Cardinals over the weekend.

To the first inductee into the #Texans Ring of Honor, #ThankYouAndre.

“I didn’t realize what my play on the field, how much it affected so many people,” Johnson said in an interview during the week leading up to the ceremony. “This week, I’m really getting to see how many people I got to touch.”

In anticipation of Johnson’s induction, the Texans hosted a week of celebrations.

Johnson even got to hug Astros mascot Orbit:

Nothing but respect for Andre Johnson. Couldn't ask for a more deserving person to be the first member of the #Texans Ring of Honor! #AndreJohnsonDay #HTownPride pic.twitter.com/GiNYKmRrEo

As part of the presentation, Texans owner Bob Mcnair presented Johnson a red Ring of Honor blazer before the two embraced. A banner memorializing the honor dropped to hang NRG stadium, making it official.

“Wow, this is amazing,” Johnson said of the honor. “I never thought coming to this city that I would have my name put up in the Ring of Honor.”

Johnson also shared his most exciting experience as a Texans player, which he said happened during the Texans’ first playoff win against Cincinnati to secure the 2011 AFC Wild Card.

After watching Johnson’s ring of honor ceremony, Texans fans are eager to find out if he will be inducted into the Pro Football Hall of Fame, but we’ll be waiting for a while, since he isn’t eligible for the ballot until 2022.

In the meantime, Houston can’t thank you enough, Andre.  An achievement well deserved.

JJ showing up for #80 Andre Johnson Day. Way to go Andre for being the First player to be giving The Texans' Ring of Honor. #80 👏👏👏🤘🤘🐂🏈🏈 #Houstontexans #andrejohnson #lovemyteam #ringofhonor