Like many Houstonians looking to express themselves after the confusion brought by Harvey, local artist John Palmer recently racked his brain for a way to give back to his city after the hurricane.

The only thing his answer treads on is the water:

Titled “On Board With Houston,” Palmer is selling prints of the painting via his website to raise money for Harvey relief at $35 a piece.

But the prints aren’t just signed by one artist:

Former U.S. President George H.W. Bush’s signature also adorns the work, and money raised from the sales will go toward his nonprofit organization Thousand Points of Light and its volunteer efforts to help rebuild the city.

RELATED: Qatar Chips Away at the Cost of Rebuilding After Harvey With Largest Donation by a Foreign Government

According to reports, the original painting will be displayed at the Points of Light foundation headquarters, and money from its sale will also go toward hurricane relief.

Palmer said he wanted to create a piece of art symbolizing the Bayou City’s healing after the flood, eventually coming up with the idea of a group of boats tethered to each other, spelling out the word ‘Houston.’

“I did start with images that were maybe of people in boats or people being rescued, and then I thought, ‘That’s obvious that’s what’s happening’ and I wanted to create an image that could be ongoing [about] the relief of the hurricane, or the people coming together,” Palmer said in an interview.

RELATED: Houston Nonprofit Searches for Missing After Harvey, but They Could Learn a Lesson From Katrina

Palmer also said he came up with the idea visiting the Bush Family while vacationing in Maine.

Be sure you check out his studio in the Heights and all of his ventures on Instagram. 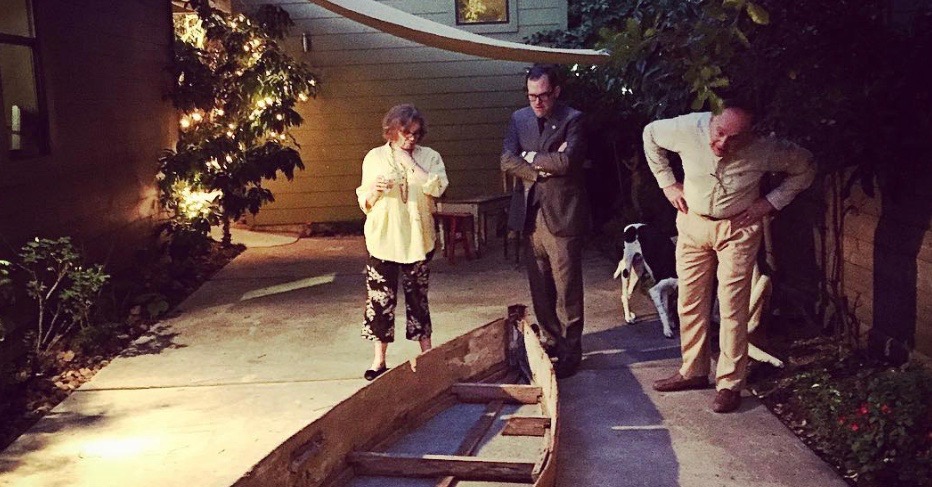