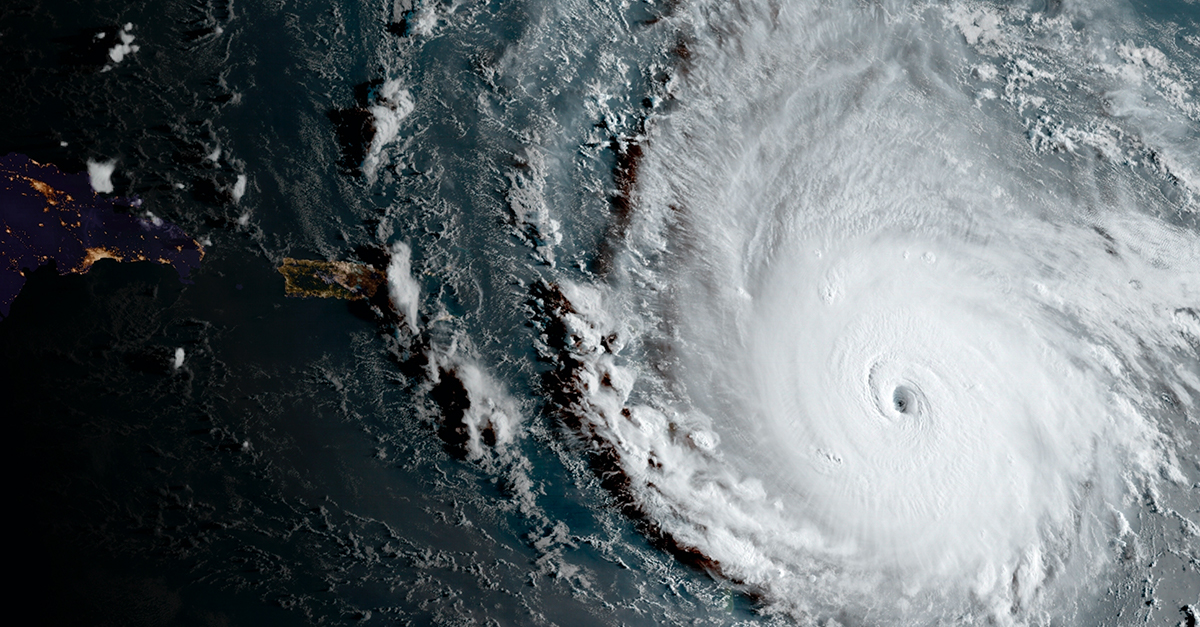 NOAA via AP
In this geocolor image captured by GOES-16 and released by the National Oceanic and Atmospheric Administration (NOAA), Hurricane Irma, a potentially catastrophic category 5 hurricane, moves westward, Tuesday morning, Sept. 5, 2017, in the Atlantic Ocean toward the Leeward Islands. This image was captured as daylight moves into the area, right, with nighttime features on the left side of the image. Hurricane Irma grew into a dangerous Category 5 storm, the most powerful seen in the Atlantic in over a decade, and roared toward islands in the northeast Caribbean Tuesday on a path that could eventually take it to the United States. (NOAA via AP)

New data shows the parameters used to map out Houston’s 100-year floodplain routinely underestimated how much rain the Bayou City gets every year.

A recent study conducted by the National Oceanic and Atmospheric Administration (NOAA) shows the amount of rainfall qualifying as a 100-year storm – a storm with a one percent chance of occurrence in any given year – rose several inches since 2002.

In Harris County, the estimate increased by 3-5 inches, according to the study.

RELATED: “Exploration Green” is taking its flood control efforts way beyond the beltway

It’s authors claim this means, instead of planning for 12-15 inches of rain per day during a 100-year event, Harris County should be planning for 15-18 inches per day, according to the Houston Chronicle.

While this may not seem to be a significant difference to some, analysts agree it could affect everything from floodplain maps to construction requirements, to who must buy flood insurance to protect their homes under law.

In turn, then, they say it could change insurance costs and the regulations placed on builders who want to develop in or near the floodplain.

Climatologist and Professor John Nielsen-Gammon said the following on the subject in an interview:

“We design our infrastructure and our society and homes to be resilient to a certain level of risk. Having updated, more accurate numbers means that we’re better able to do that, and the risk we’re undertaking matches the risk we’re designing for.”

NOAA is reportedly making its preliminary findings available for public comment until January 19, and the final estimates will be published in May 2018.

Many described Harvey as a 1000-year flood event, but it reportedly came at least as the third 500-year storm to hit Houston in a year.

Before the NOAA study announcement, weather experts agreed the hurricane marked a clear need to recalibrate the estimates we use to prepare for flood events.

Once completed, they believe the latest study could be another step down this path.

Should it effectuate a change, floodplain maps could need to be redrawn, and developers may see new restrictions:

The city also proposed new development regulations this month, some requiring homes to be built eight-feet higher than before, according to the Chronicle.