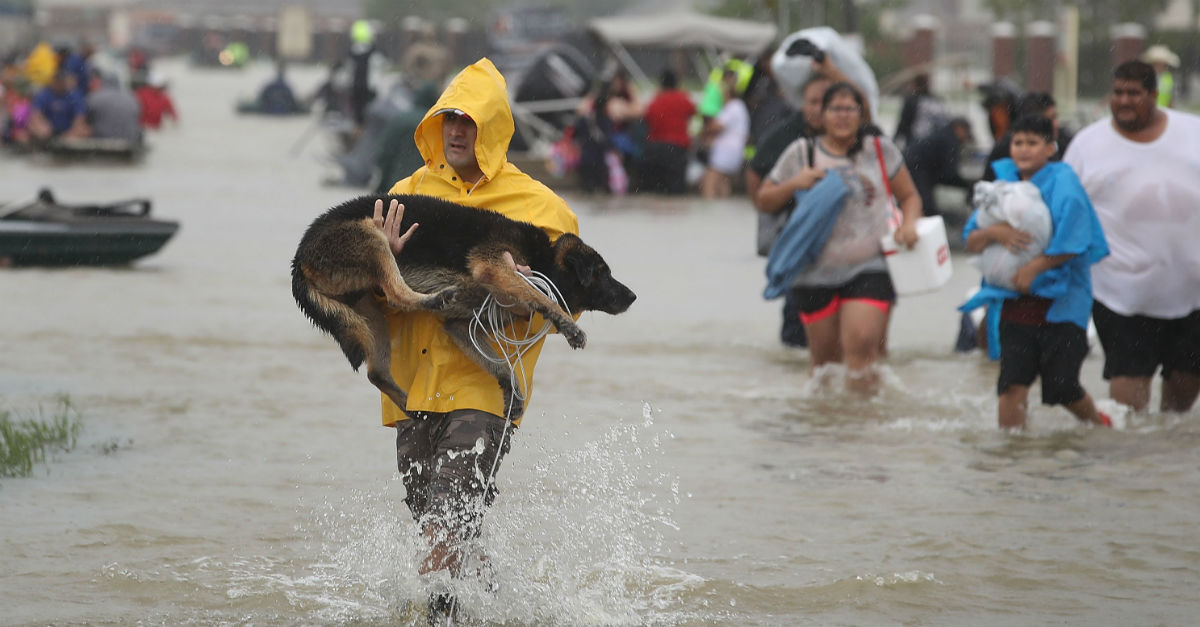 Photo by Joe Raedle/Getty Images
HOUSTON, TX - AUGUST 28: People evacuate their homes after the area was inundated with flooding from Hurricane Harvey on August 28, 2017 in Houston, Texas. Harvey, which made landfall north of Corpus Christi late Friday evening, is expected to dump upwards to 40 inches of rain in Texas over the next couple of days. (Photo by Joe Raedle/Getty Images)

Months on from the storm, the nightmare of the hurricane are still a current reality for some, with a number of homeowners reportedly suing the government over damage sustained to their homes.

And the total value claimed could climb into the billions:

RELATED: Flooded Out Cars From Harvey are Starting to Reappear to Unsuspecting Consumers

A new report in Bloomberg Businessweek details the struggles of homeowners in a wealthy area of west Houston, many of whom are considering litigation against the government, potentially setting precedent for how much blame the federal government shoulders after a major natural disaster like the Bayou City saw this summer.

The lawsuits are already being compared to those filed in 2004 after Katrina when the levees broke, and records show Chief Justice Susan Braden, the judge presiding over the current proceedings, oversaw those cases for close to 10 years.

If possible, she said she would like to avoid lengthy court proceedings over these lawsuits:

?I don?t want to wait 14 months to do something,? Judge Braden said in an address to a courthouse of lawyers there to discuss approaches for such cases going forward. ?No one is living in those homes.?

Lawyers from across the U.S. are reportedly flying in for these proceedings, and many predict plaintiffs could eventually look to get big energy involved if they join parties to the suit over their flooded headquarters in the aptly-named Energy Corridor, where the affected residents reside.

This situation differs from Katrina, though: the people living here in Houston are much wealthier.

According to the Bloomberg piece, the median income of people living in the Energy Corridor is known to top three times to those living in the rest of the city.

The case doesn’t rest on the fact that the plaintiffs are disadvantaged, however; rather, lawyers are arguing officials flooded their clients’ homes to save everyone else’s.

During the worst of the storm, the Army Corps of Engineers decided to conduct a controlled release of the dams at Addicks and Barker Reservoirs in west Houston, where water levels rose quickly and climbed faster than predicted.

To avoid a catastrophic break in the dams, the record-breaking rainfall forced engineers’ hands.

When they did release the waters, it flooded the surrounding homes even worse than Harvey brought organically.

Residents claim the release started around 1:00-1:30 a.m., when most residents slept, unprepared for the deluge of extra water into the area around their homes. Many reportedly planned to leave the next morning.

Harvey forced workers to halt repairs being made to the Barker dam during the storm.

If it did break, according to the Houston Chronicle, west Houston could be a graveyard today.

Buffalo Bayou overflowed and blasted muddy water into the surrounding houses after water spilled from the reservoirs; releases reportedly continued until more than a week after Harvey hit.

Of the flooding and the resulting damage to homes and possessions, the piles of debris and mold, one resident summed up the scene:

?This was not an act of God, this was an act of man. They pushed us onto a grenade to save the rest of the city.?

RELATED: Turns Out Things are More Than Twice as Bad for Houston Housing After Harvey