Pasadena’s mayor says he not racist, but his choice of words during a recent council meeting suggests otherwise 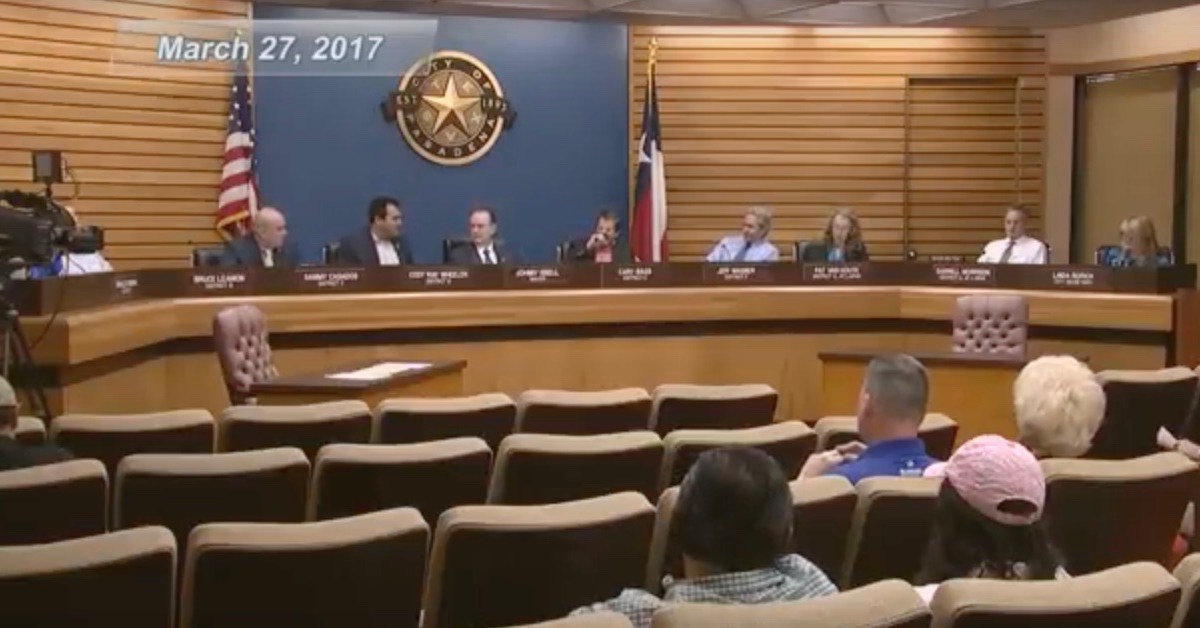 Many would consider the word ?boy? as nothing more than a harmless noun.

But when Pasadena Mayor Johnny Isbell used it to recognize Hispanic City Councilman Cody Wheeler ahead of a vote Tuesday, the otherwise innocuous word took on a whole different meaning:

Having evolving from historic terms used to refer to black men, circuit judges from a 2010 federal court decision found the derogatory value of the term today to be based on ?various factors, including context, tone of voice, local custom and historical usage.?

RELATED: A routine train ride exploded into the beatdown of the century when racist words were hurled

Some southerners agree that calling someone ‘boy’ is not meant to be friendly in any capacity and would find the term offensive when directed toward anyone, even if they were white.

One Kentuckian described the progression of the term to explain its belittling propensities:

Even if it?s used in a genial manner, it?s still an insult. Like you see someone taking a piss outside and you?re like, ?Boy, what are you doing?? [?] There?s the watered-down version, as well, which is ?young man? or ?young woman?. It?s still asserting authority over the person addressed as such, but unlike ?boy? or ?girl?, it implies that the person addressed has some cognitive faculties, though minor and in need of correction. Like a kid who stayed out past curfew might get addressed as ?young man/lady? while receiving a dressing down.

Earlier this year, Mayor Isbell?s redistricting Prop 1, which passed after it was introduced to prevent Hispanic voters from electing a majority of Pasadena City Council seats, was struck down by a federal judge who found the scheme primarily ?designed to dilute minority voting strength.?

RELATED: President Obama surprised the nation by going on this podcast, but it was a certain word he used that made headlines

The white mayor described his boy-ish incident from Tuesday as a ?slip of the tongue? and has since apologized:

I apologize to Councilman Wheeler for my comment during yesterday?s City Council meeting. I agree that the term could be construed as inappropriate and that City Council members should be addressed more respectfully. What I don?t agree with is those who have called the comment ?racist.? There was no racial component in my mind whatsoever.

However, Councilman Wheeler remains skeptical at the attempted display of remorse from the man who once falsely claimed that 70 percent of Hispanics in Pasadena were in Texas illegally:

“There’s some overtones there of an ugly past when you use that type of language,” Wheeler said in an interview on the situation. “This is a mayor who has [?] pushed through discriminatory voting practices and now is using condescending language to minority council members. I don’t know how else you take it, when you put it in context.

“I’m sure he didn’t mean to say it. But that doesn’t mean he didn’t feel it.”

The Tuesday vote sparking the exchange was to approve a city contract for tax collection, which narrowly passed on a split count following the contentious, potentially-racist remark.

Watch the entire 20-minute council meeting and evaluate Mayor Isbell?s comments for yourself, with the action picking up around the 6:50 mark: