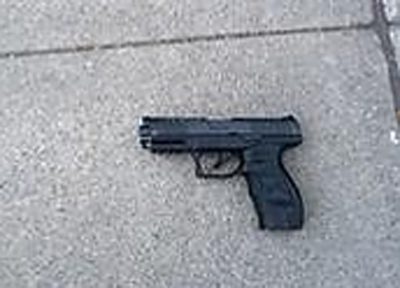 According to authorities, a homeless man sleeping near a Houston bar is responsible for getting two thieves off the streets.

At around 11:30 p.m. on Wednesday night, two thieves reportedly pried open the door of El Zorro nightclub, located in a shopping center on De Moss near Fondren in Sharpstown.

A homeless man who said he found shelter at a nearby car wash spotted the break in and used a cell phone to call police.

Authorities arrived to find the men inside the bar attempting to steal an ATM machine and flat screen TVs.

Police say the two criminals backed an SUV up to the door, which contained some stolen items, including TVs and a laptop.

The suspects fled the scene with police in pursuit upon their discovery; during the chase, authorities allege one of the thieves threw a pistol up onto the roof of the building.

The Houston Fire Department authorities said they recovered the weapon; K-9 units eventually arrived and located the suspects, both of whom police arrested, records show.

According to reports, the suspect who threw the gun did so while he served time on parole and wearing body armor.