Both sides came armed for a protest, but the peace was kept in Sam Houston Park 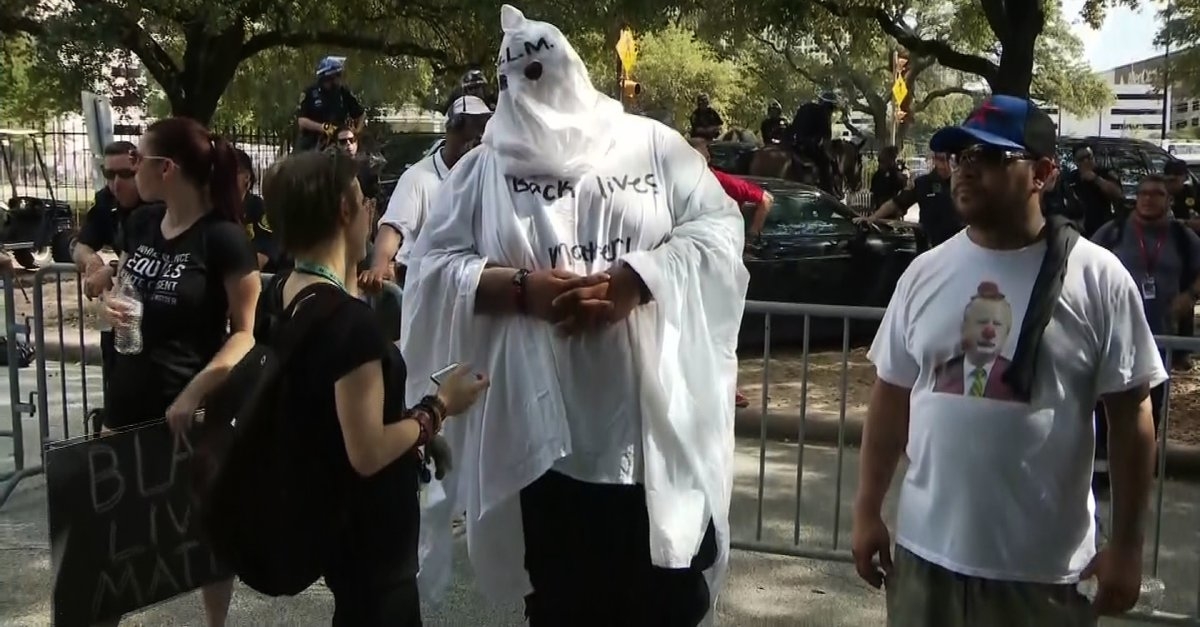 About 400 protesters gathered near Sam Houston Park Saturday in opposition to a controversial statue called “The Spirit of the Confederacy.” A few dozen counter-protesters came in support of the statue — some of whom toted Confederate flags.

The protest was part of a movement to convince the city of Houston to remove statues supporting the Confederacy from public spaces.

Protesters weren’t allowed inside the park because it had been booked for a wedding. While the wedding was scheduled for 3:00 p.m., the couple instead married at 1:00 p.m. because of the protest.

A group called the Houston Young Communists League requested last week the Houston City Council remove the statue. As city officials balked at making an immediate decision, a group of citizens decided to take matters into their own hands, posting a Facebook event titled “Destroy the Confederacy!”

The stated goal of the event was to demand action from the city, though some believed that the group intended to tear down the statue.

The protest lasted for about three hours.

The left-leaning protesters gave speeches, cheered, and chanted for progress, while the counter-protesters jeered and waved their Confederate flags from behind a barricade constructed by police.

Protesters urged the statue should be removed because it is a symbol of oppression; counter-protesters argued those efforts were trying to erase history.

One member of Black Lives Matter attended the protest dressed in a parody of KKK robes. Another protester brought a sheet cake inscribed with “Resist” in reference to Tina Fey’s recent political skit on Saturday Night Live‘s Weekend Update.

Hundreds gather in a Houston park to demand the city take down the Spirit of the Confederacy statue. SE-014SA pic.twitter.com/A4t8JkjucX

The Houston Police Department maintained peace throughout the protest. Barricades were placed to control the crowd, and officers on horseback patrolled the park area.

A small group of people dressed in fatigues and armor attended the event with long guns, claiming to be added security in support of the police.

A few of the protesters on each side carried guns. Luckily, there were no instances of violence and no arrests were made. However, police acknowledged that some protesters became sick from the heat.

This display of dissension over controversial statues is only one in a slew happening in the Houston area.  Vandals poured red paint over the Christopher Columbus statue last Friday in Montrose’s Bell Park. White paint was also poured over a Martin Luther King, Jr. statue in Sunnyside.