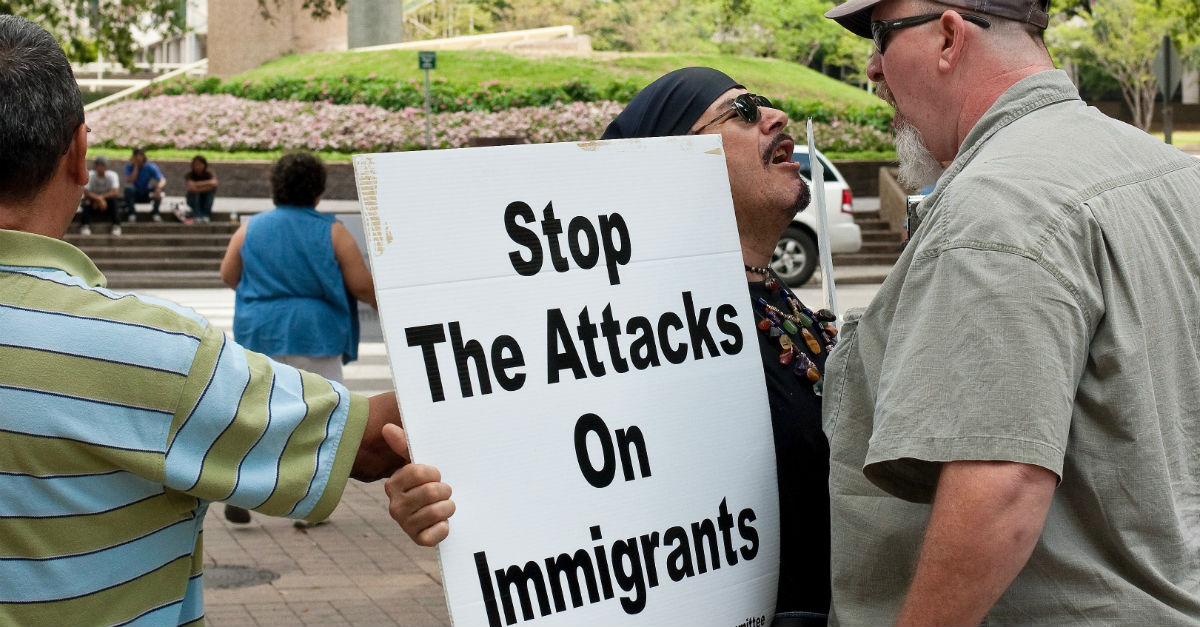 Cristobao Hinojosh, center, a member of a Mexican activist group argues with a member of the U.S. Border Watch activist group who did not wish to be identified, during a protest on illegal immigration and border security, Saturday, May 2, 2009 in front of City Hall in Houston. (AP Photo/Houston Chronicle, Todd Spoth)

A report from Houston Public Media claims the revocation of ?temporary protection status? for thousands of refugees from El Salvador could slow down Houston’s efforts to recover from Hurricane Harvey.

The report states the city could lose thousands of qualified, experienced construction workers if the plan to deport Salvadoran refugees is carried out.

RELATED: Salvadorans Could Be Deported After End Of Immigration Protections

In 2001, the George W. Bush administration granted Salvadorans temporary protection status after an earthquake devastated the country’s infrastructure and killed more than 1,000 people.

In 2016, the Obama administration extended the immigration status of Salvadoran refugee due to the country’s ongoing civil wars and political unrest.

Earlier this week, the Trump administration announced its plans to end the protection on Sept. 9, 2019.

According to the Houston Public Media report, more than 36,000 Salvadoran refugees live in Texas, with 20,000 in the Houston area. The Houston Hispanic Chamber of Commerce estimates 20 percent of the Salvadoran immigrants in Houston are in the construction trades.

The loss of protected status for these immigrants could mean the loss of up to 4,000 workers as Houston still struggles to recover from Harvey.

?Contrary to popular belief, there?s aren?t people standing in line trying to do that work,? said Murillo. ?And if you?ve been part of this rebuilding of your home or property, you?d be the first to agree.?

In addition to Harvey repairs, Murillo also mentioned Houston has a dire need for construction workers for other projects. These projects range from the upcoming changes to Interstate 45 near downtown Houston, to additional buildings going up in the Texas Medical Center.

Mass deportations could also affect Houston’s economy outside of the construction trades. Houston Mayor Sylvester Turner told a Houston newspaper about the economic contributions made by Salvadorans, both in Houston and across the state.

“Many of them own businesses and work in our service industries,” Turner said. “They contribute $1.8 billion to the Texas GDP (Gross Domestic Product).”

A statement from the Department of Homeland Security claims the 18-month delay will allow for an ?orderly transition,? as well as time for Congress to work out a solution through legislation.