Several Texas oil workers are injured, and an area man is missing after two separate incidents rocked the industry 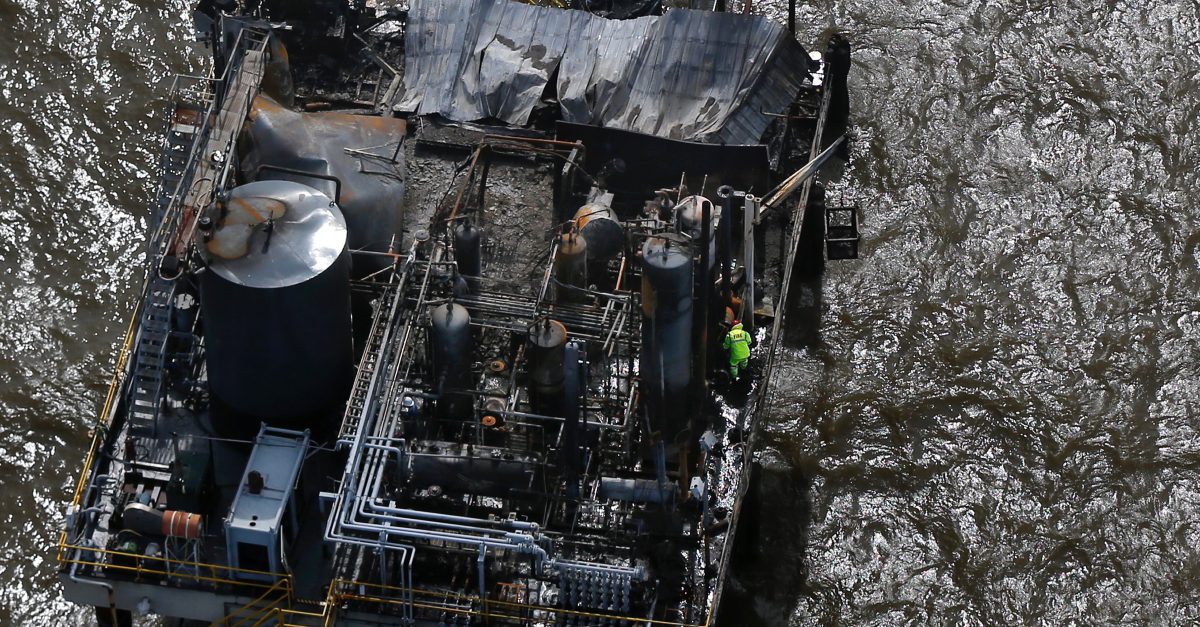 AP Photo/Gerald Herbert
A worker stands on an oil and gas platform in Lake Pontchartrain, in Kenner, La., that exploded overnight near New Orleans Monday, Oct. 16, 2017. . Seven people were injured, including three who were in critical condition. Authorities searched by air and water Monday for a contractor who disappeared in the blast. (AP Photo/Gerald Herbert)

Authorities said the explosion occurred at the Ledwig Ranch oil field in La Salle County just before 11:00 a.m. Wednesday morning; they said they blast was powerful enough to be felt at the county courthouse, 16 miles away.

Marc Robertson, a spokesman for the La Salle County Sheriff’s Office, described the feeling during an interview as ?a rumbling that went on for a couple of seconds.?

Robertson also said the two injured workers, who remain unidentified, were taken by helicopter to a nearby hospital, but he told a San Antonio TV station the emergency airlift “should not be interpreted as injuries having been severe or life-threatening.”

According to Robertson, several oil storage tanks were ablaze, when fire crews arrived at the scene.

He told the station during an interview “an initial blast at the scene had extinguished itself and that peripheral fires remained.”

Firefighters reportedly formed a perimeter around the blast area and extinguished the remaining fires.

Meanwhile, authorities called off the search for a Katy man reported missing after an explosion on Monday at a Louisiana oil and gas platform last week.

Timothy Morrison, 44, of Katy, remains missing after the explosion and fire of an oil and gas platform on Lake Pontchartrain.

Five other workers were injured with burns and blast-type injuries during this separate incident. Authorities said three of them were listed in critical condition.

Authorities further said Coast Guard helicopters and vessels, a Jefferson Parish helicopter and vessels from several local agencies were used in the search for Morrison, but to no avail.

They called off the search at 9:00 p.m. Wednesday.