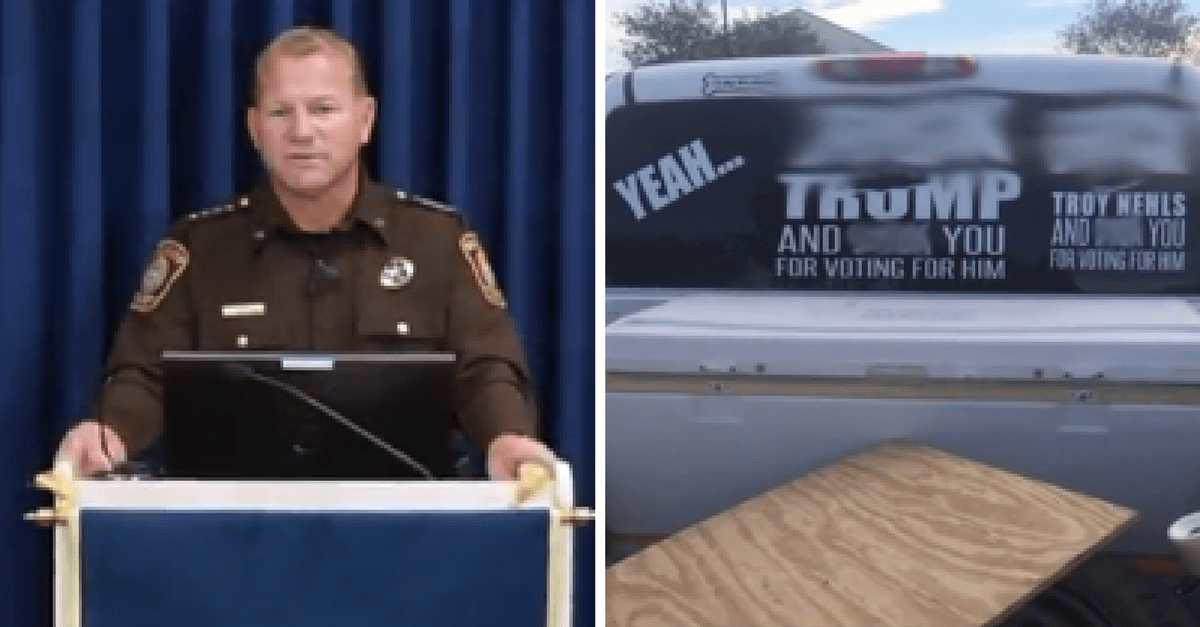 The Texas sheriff who threatened a woman with a disorderly conduct charge for her truck’s sticker that reads “F**k Trump and f**k you for voting for him” is speaking out again now that she’s added a new sticker just for him.

“What direction is the arrow pointing today?” Sheriff Nehls of Fort Bend County wondered about the current state of our divided country. “It’s just a sad state of affairs. Our country is at a moral decline.”

Karen Fonseca’s new sticker, which sits alongside her Trump one on her back window, reads “F**K Troy Nehls and f**k you for voting for him.” The truck owner made the addition after Nehls called for her to remove the sticker or face the possibility of criminal charges via a since-deleted Facebook post and following her arrest on an outstanding warrant from years ago days later. Despite his bringing her into the spotlight with his public threat, Nehls is ready for her “15 minutes of shame” to be over.

RELATED: Woman with “F**k Trump” sticker on her truck has added a new one for the sheriff who arrested her

“I have received numerous calls regarding the offensive display on this truck,” Nehls wrote in the since deleted Facebook post along with a picture of Fonseca’s truck. “If you know who owns this truck or it is yours, I would like to discuss it with you. Our Prosecutor has informed us she would accept Disorderly Conduct charges regarding it, but I feel we could come to an agreement regarding a modification to it.”

He went on to site the Texas disorderly conduct law and argued that the sticker could be a “breach of peace” if any confrontations were to arise between the Fonsecas and those offended by it. After Fonseca came forward as the vehicle’s owner, she was arrested on a 2014 warrant, which she was unaware of. On Monday, she announced that she is considering filing a civil rights lawsuit against the sheriff under the belief that her arrest was related to the sticker — something the Nehls has denied.

The district attorney has reportedly stated that his office has no plans to file any charges against Fonseca for her stickers, which she and her husband have consistently maintained are examples of their right to freedom of speech.

RELATED: Texas sheriff reveals the reason a “F*** Trump” sticker got her locked up quick