At 181 years old, Texas has never looked so great.

And on this glorious Independence Day, some of us are pretty into it — a few more than others.

RELATED: One representative has had enough of Texans using the Chile flag emoji to honor the state

Take U.S. Senate Sheriff and Republican Whip John Cornyn, who wore a fantastic brown suit to this morning’s confirmation and cloture vote on the Senate floor. 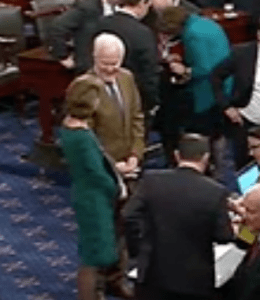 Legend has it Texas hero Sam Houston was also quite the ladies man while he was a senator; apparently, he was known for whittling wooden hearts at his desk during session proceedings and passing them out to fair women watching from the gallery.

Cornyn has actually been married for 30 years and clearly was just there to make sure the vote to confirm Ben Carson as Secretary of HUD went as planned.

Down in Houston, you can make a pilgrimage to the hallowed grounds where Santa Anna was captured and visit the San Jacinto Monument, like this patriotex (patriotic for Texas), who somehow made it from DT to the world’s tallest masonry column symbolizing our victory 181 years ago.

RELATED: Texas rejected the idea of two Santas in 1836

Better call ahead if you want to make it all 567 feet to the top, though; the elevator is notoriously broken.

Regardless, the San Jac Monument is still almost 13 feet taller than the Washington Monument. And our Capitol is taller, too, (308 feet v. 288 feet) because, well – don’t make me say it.

Texans aren’t the only one getting into it, though!

I refuse, I won't be with a woman who has forgotten the Alamo.

The Disney star is not from Texas, but clearly the plethora of yellow rose Mouseketeers (Disney kids from Texas) has stolen his heart.