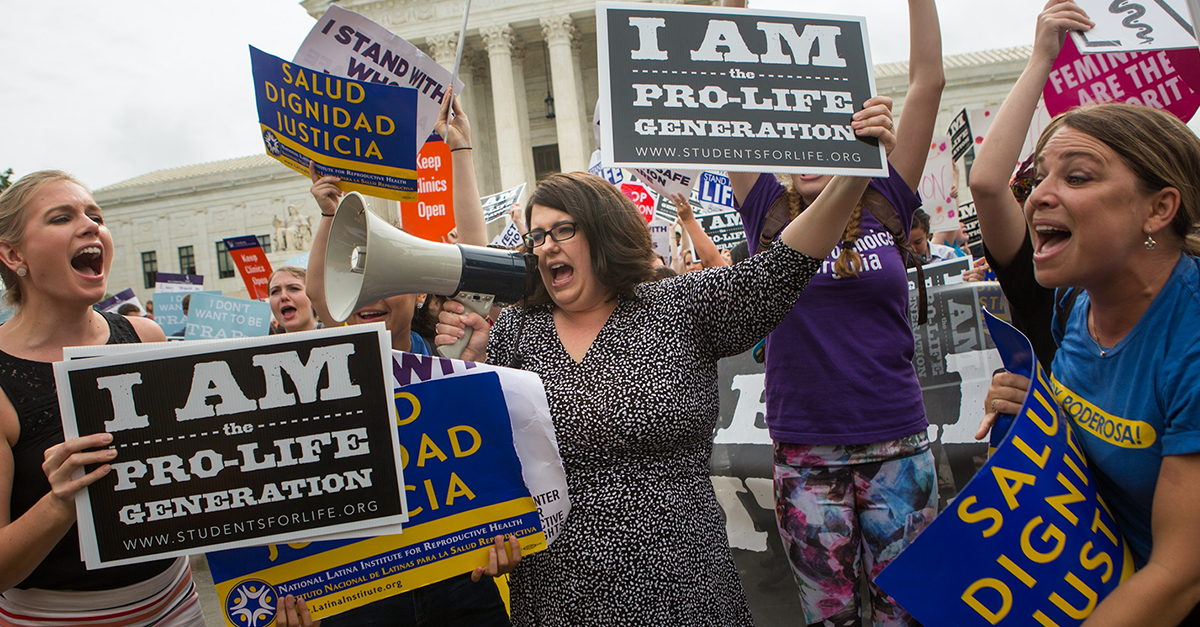 Photo by Allison Shelley/Getty Images
WASHINGTON, DC - JUNE 23: Kristan Hawkins, president of Students for Life, center, and other pro-life protesters clash with pro-choice protesters in front of the U.S. Supreme Court on a day where two important decisions on immigration and affirmative action were handed down by the court, on June 23, 2016 in Washington, DC. A decision in the case over a Texas law requiring clinics providing abortion services to meet the same building standards as walk-in surgical centers had been expected but was deferred. (Photo by Allison Shelley/Getty Images)

The Texas budget will reportedly include another $20 million dollars for the state’s controversial Alternatives to Abortion program.

RELATED: A Federal Appeals Court is Delaying an Abortion for a 17-year-Old Undocumented Girl in Texas

The boost in funding will bring the program, which includes maternity support groups and help with items, like car seats and baby formula, to a total operating budget of more than $38 million.

According to the Texas Tribune, this is the most money at the program’s disposal since 2006.

Alternatives to Abortion is run by the Texas Department of Health and Human Services (DHHS), and, according to its website, works to provide “classes on life skills, budgeting, parenting, stress management and General Education Development (GED).”

Funding needs for state programs under the Texas Health and Human Services Commission are required by law to be reported, and money is allocated every two years; the 2018-2019 budget marks the largest increase in funding for Alternatives to Abortion since its inception in 2006, according to the Tribune.

Advocates for the program say the goal is to make people self-sufficient and ultimately contribute to fewer people relying on the state for financial assistance.

“If they?re self sufficient through the process of childbirth and afterward, that saves the state money and makes for much happier women and children and families,” Joe Pojman, the executive director of anti-abortion group Texas Alliance for Life, said in an interview.

Others say the program is encouraging the opposite of the initiative’s motives, drawing money away which could potentially be used for family planning and health care for parents.

Heather Busby of NARAL Pro-Choice Texas said she believes the money should be put toward helping people earn a living wage through better protections for people in low-income jobs:

“Clearly the state is prioritizing ideology over public health because a true alternative to abortion would be ensuring access to health care, especially family planning,” Busby said in an interview with the Tribune.

Texas is known across the nation for its conservative views on abortion, banning dilation and evacuation abortion procedures this year, aligned with its state’s majority points of view.

RELATED: The Texas House Just Voted for a Major Bill Regarding Late-Term Abortion