The “Young Communist League” is recruiting folks at the University of Houston — are you shocked? 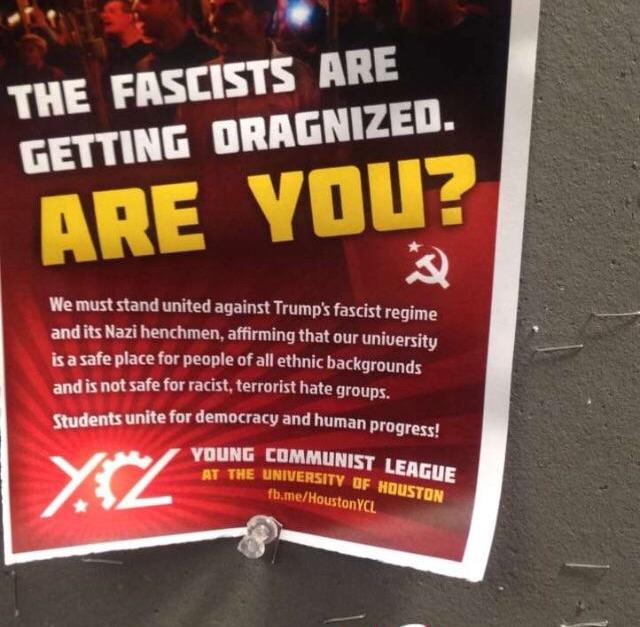 A flier posted posted on the University of Houston campus appears to recruit students to join the “Young Communist League.”

The flier, which was first revealed on Reddit’s Houston page, calls for students to “stand united against” what it calls the Trump Administration’s “fascist regime.”

Its design attempts to reclaim old-school Communist propaganda posters, complete with a red-and-yellow color scheme and the hammer-and-sickle insignia used by the Soviet Union from its creation in 1917 until its dissolution in 1991.

The poster also asserts “our university is a safe place for people of all ethnic backgrounds and is not safe for racist, terrorist hate groups.”

A notable part of the poster is the headline, which claims “The Fascists Are Getting Organized,” but misspells “Organized.” The poster refers readers to the group’s Facebook page for more information.

According to sources, a History student named Michael Leone is the chairman of the Young Communist League at the University of Houston. The group’s Facebook page says Leone will attend the World Festival of Youth and Students this October in Sochi, Russia, just a few months before the city will host the 2018 Winter Olympics.