This badass made a citizen’s arrest of a drunk driver, and caught the whole thing on video 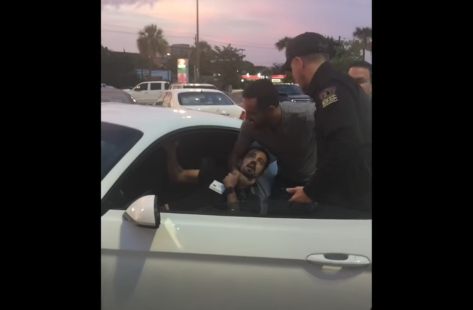 A video that already has amassed more than 70,000 views since publication on YouTube three days ago shows a Houston man following a drunk driver and eventually dragging him from the vehicle when he stops in a parking lot.

According to the video’s description, the man’s family was visiting from Venezuela, and he was showing them around Houston when they encountered the drunk driver. The video starts with them following some distance behind a swerving, late model Mustang, still on the phone with 9-1-1. The man’s brother-in-law recorded the video.

His family can be heard in the background exclaiming as the drunk driver swerves back and forth across the road, sometimes into oncoming traffic. His daughter in the back can be heard saying “Dad, stay back!” multiple times.

This was apparently the third DWI charge for the person driving the mustang.

Before the footage we see, the man and his family called 9-1-1 on the drunk driver, followed him to a restaurant, and saw him stop. They believed he was going to be kept there to wait for police, but the drunk driver got back in his car and took off again, at which point the video starts.

Eventually, the man was able to pull the drunk driver from his car while stopped in a grocery store parking lot. Another vehicle was damaged, but no one appears to have been hurt.

RELATED: Good Samaritan Makes Sure to Get Drunk Driver Off the Road.