Wind power could be blowing up job creation in Texas, experts say 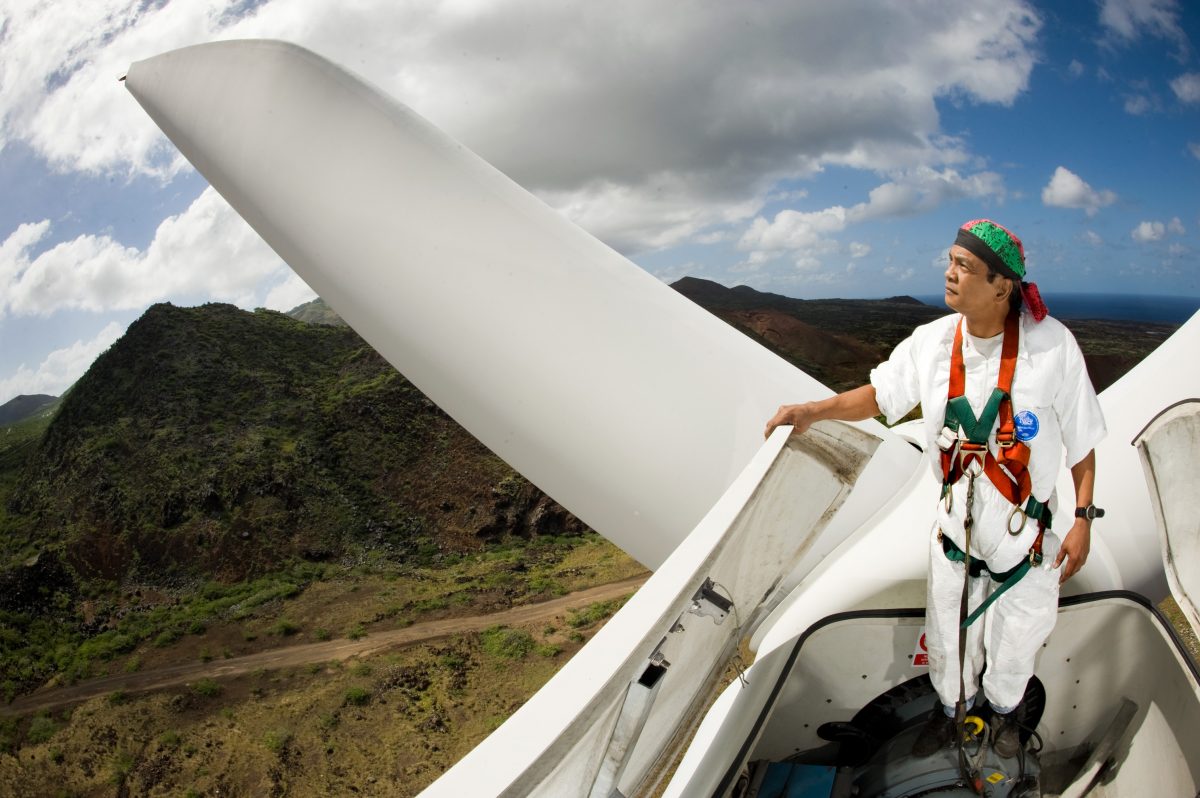 U.S. Air Force photo/Lance Cheung
Mr. Damien Cuello uses the more than 110-foot high view from a 900kW wind turbine to get a better visual inspection of the other 900kW turbine and four other 225kW turbines at 45th Operations Group Detachment 2, Ascension Auxiliary Airfield (AAF), South Atlantic Ocean. The power house operator/ mechanical associate is tethered and stands on the drive-line to get parallel views of the other generator housings. Mr. Cuello is a Computer Sciences Raytheon contract associate in charge of maintenance for the 6-wind turbine facility. The wind turbines work in parallel with low-load diesel generators powering the airfield, Space Command sites and facilities, and a royal air force airfield facility on the island. Ascension AAF's award winning economical self-sufficiency solutions also includes drinking water production and waste water treatment. The mission of Det. 2 is support of eastern range space launches by collecting and disseminating radar, telemetry and tracking data. Ascension island is 35 square miles in a remote island location midway between Brazil and Angola. The nearest country is Liberia - 1000 miles away. (U.S. Air Force photo/Lance Cheung)

Wind farms are reportedly redefining Texas’ energy industry, and experts say they may be blowing up jobs along they way.

Earlier this year, the allegedly greener form of energy officially passed up coal in terms of kilowatts produced as a source of energy for the Lone Star State, and, as more coal plants close, more wind turbines are said to be springing up on plains and hillsides, like metal trees or flowers dotting the landscape.

RELATED: Wind blows past coal as an energy source for the first time in Texas’ history

Industry experts say wind power may also come with an advantage over oil and gas, with some going as far as to claim working in wind to be much safer.

“The wind industry has changed my life, and it’s changed it for the better,” James Beall said in an interview with Inside Climate News.

Beall said he works in the wind industry and teaches interested college students how to become wind technicians, the same way he did after the birth of his son led him to take a break from the work force and his previous life as an electrician.

According to the federal government’s Office of Energy Efficiency and Renewable Energy, wind power provides anywhere from 12 percent to half of energy for the Texas grid, depending on the season and level of overall demand.

Furthermore, according to the Bureau of Labor Statistics, green jobs in America are in high demand:

Photovoltaic panel installers and wind technicians are reportedly among the top positions with a need for skilled labor as the renewable energy industry grows, with a wind technician making an average salary of over $50,000 per year.

Some say this could explain why wind power is receiving bipartisan support from those who see it not as a political issue, but, rather, as an opportunity to make money.

Thanks to tax incentives, for example, which will allegedly allow the sector to keep blowing up growth, the wind industry could generate a lot more revenue and opportunities for the state in years to come if it continues on its present upward path.

RELATED: This Texas city has a pioneering approach to energy