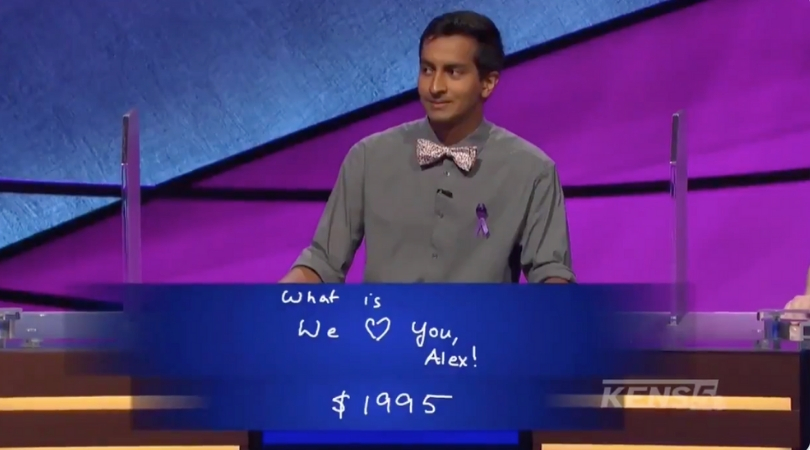 As many of us are aware, the host of Jeopardy!, Alex Trebek was diagnosed with pancreatic cancer earlier this year. Many past contestants and winners have donated portions of their show earnings in honor of him to pancreatic cancer research as well as events. Viewers from around the world are also speaking up to offer support and let the game show host know that they care. On last week’s episode of Jeopardy! Tournament of Champions, the kindness continued to show.

Returning contestant Dhruv Gaur, who won $100,000 earlier this year in the College Tournament of Champions, gave a message of support during the show game. Instead of answering the “Final Jeopardy” question of the game, Gaur, who is a Brown University student,  grinned and wrote “We ??you, Alex!” as his answer. Trebek noticed the smile and inquired about what Gaur’s answer was, saying, “You?re smiling…I like that. Let?s take a look at your response. Did you come up with the right one??

Contestant Dhruv Gaur was stumped during a Final Jeopardy question so instead he wrote, “We love you, Alex.” The host, Alex Trebek, who has pancreatic cancer, was moved by the gesture. ❤️ 🎥 Courtesy: Jeopardy

When host Alex Trebek read the sweet message of support he got a little emotional. He played it off like the pro he is with a quick, funny remark. He said, “That’s very kind of you. Thank you… Cost you $1,995. You’re left with five bucks. Okay”. We get it, he didn’t want to cry on national television. What a kind thing to do on Gaur’s part! On social media, Gaur’s answer, as well as the phrase “random act of kindness” was trending quickly after.

Even the official Jeopardy! social media tweeted about the moment with his picture smiling fondly at the game show host. The Jeopardy! Tournament of Champions winner, Alex Jacob, also gave him a shoutout in a funny twitter video changing Gaur’s answer to a winning $2000 response with the caption, “There was a mistake in tonight’s Final #Jeopardy, @dhruvg_ is actually correct.” He then tagged Dhruv in his tweet to poke fun at him. He was also on the Ellen Show shortly following. Safe to say he lost that money, but it was still sort of a win!

The Answer Is…Reflections on My Life