Amber Rose was in no mood to take any of Piers Morgan’s sass on Twitter.

Over the weekend, Rose posted a nude selfie on social media to promote her annual SlutWalk, and though it was quickly deleted by Instagram, it remained on Twitter. Morgan, of course, had something to say about it.

“Put it away, luv. Thanks,” he wrote in response to Rose’s photo without bottoms on.

Put it away, luv. Thanks. https://t.co/aZcTyLdvrJ

It didn’t take long for Rose to respond and attempt to take Morgan down on Twitter.

But, Morgan still wasn’t done with her. He fired back once again, writing, “It’s not ‘misogyny’ to think that posting nude photos in the supposed name of feminist empowerment is pathetic attention-seeking bulls**t.”

RELATED: “DWTS” host Erin Andrews is speaking out about what she did for her future before battling cervical cancer

It's not 'misogyny' to think that posting nude photos in the supposed name of feminist empowerment is pathetic attention-seeking bulls**t. https://t.co/39rIjaaUXu

Rose tweeted in response, “Nude? Where? My breast nor my vagina was showing and my legs were closed. I am assuming you are referring to the pubic hair that was shown in the picture. Uncomfortable? Get over it.”

I am assuming you are referring to the pubic hair that was shown in the picture. Uncomfortable? Get over it. https://t.co/ZD0dZzwAWc

“I can handle your naked body, Amber – relax. I just can’t handle your ridiculous claim to be stripping off in the name of feminism,” Morgan responded adding later, “Talking of idiots, can’t you think of a less dumb way to promote feminism than getting your kit off?”

Rose still wasn’t done and shared a photo of a nude Adam Levine, who had women’s hands over his genitals. She asked the TV personality if he thought that photo was attention seeking, and Morgan stated that it wasn’t, as Levine was promoting prostate and testicular cancer awareness for charity.

That’s when Rose lost it.

“I raise awareness for my foundation as well Piers,” she responded. “That’s like saying breast cancer awareness is cool but what about HIV and AIDS […] my ‘naked’ body offended you for my nonprofit SlutWalk but a woman grabbing Adam Levine’s dick and balls was cool?”

Lol @piersmorgan my "naked" body offended you for my nonprofit SLUTWALK but a woman grabbing Adam Levine's dick and balls was cool?😆

“I’m sorry I forgot only men can be sexually confident,” she tweeted again.

Morgan then shared a photo of himself “nude” in a Burger King ad and wrote, “If famous men started posting naked photos to social media claiming it was to ‘promote male empowerment’, they’d be jailed.”

I am re-posting this in the name of male empowerment. 💪💪
cc @DaRealAmberRose pic.twitter.com/lYzyUpo0dJ

Though, things seemed to calm down one day later and they came to an accord. They both agreed to disagree and Rose even invited him on her show to really “hash this out.”

Done. 👍
I'll get my people to talk to your people.
Just don't bottle it like @ladygaga. https://t.co/lPusmfURcs

And all is right again in the world again. 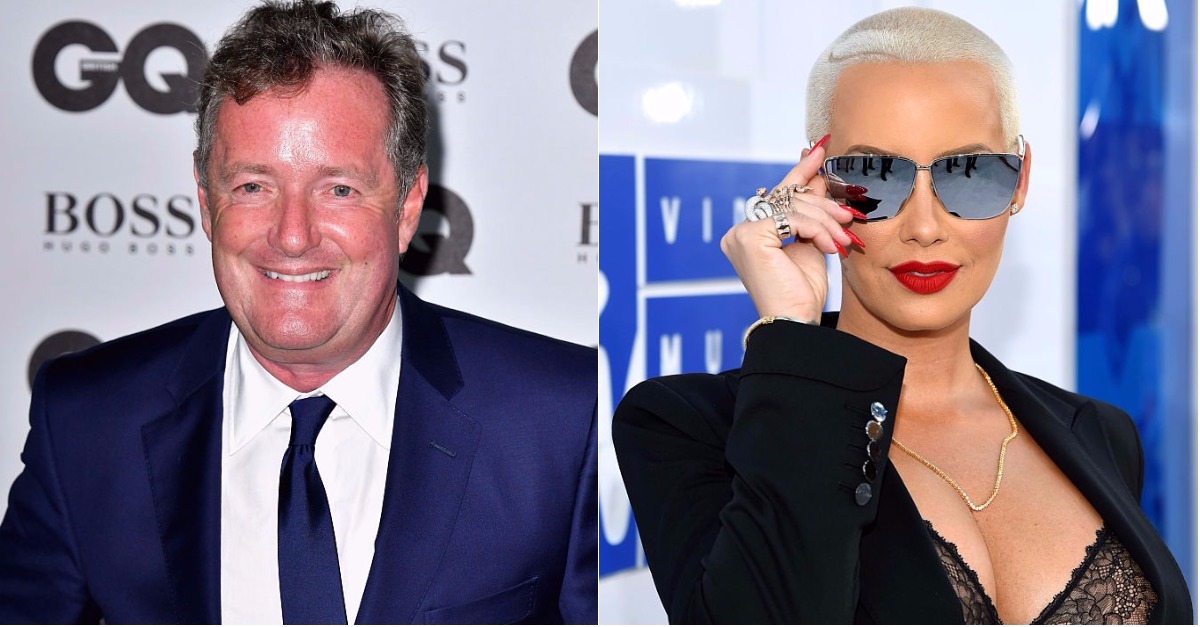