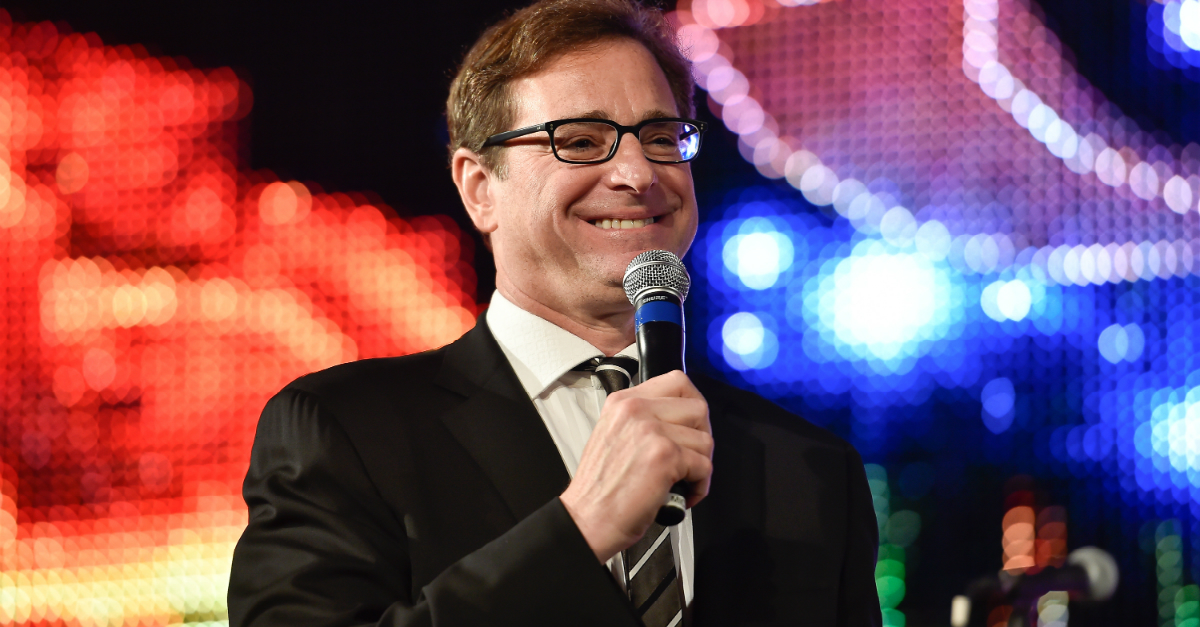 He might have a reputation as an old-school, potty-mouthed “blue” comedian, but there’s a lot of life in Bob Saget’s work: it would be a stretch to refer to his new special “Zero to Sixty” as deeply personal (although that description could easily be applied to his 2014 book “Dirty Daddy”), but there’s certainly more to it than just dick jokes — not that they aren’t there in abundance. “My wonderful penis jokes are always good, because they’re not about other people’s penises,” he jokes. “They’re about my penis, and my penis doesn’t get me in trouble!”

Even if you’re not entirely familiar with Saget’s vast repertoire, his name probably rings a bell. He’s a 61-year-old show business veteran who has been writing and performing his own material since he was 16. “I made an hour-long movie called ‘Beach Blanket Blintzes’ about a blintz that turns people into sour cream,” he says. “I gave a little speech before screening the movie and ended up doing some crowd work when a guy went to the bathroom while I was talking. It got a few laughs, and I’ve been performing ever since.”

RELATED: Not the funniest guy in the room: “Wrecked’s” Brian Sacca chats with Rare about Scorsese, stripper spankings and sunburned eyeballs

A quick glance at his IMDB profile is all takes to realize just how prolific Saget really is. But like most success stories, Bob’s wasn’t without its rough patches. Aside from the relentless grinding away at hole-in-the-wall comedy clubs in front of unenthusiastic audiences, there were some personal hardships also. In 1992, Saget’s 44-year-old sister, Gay, passed away from scleroderma — a rare autoimmune condition that causes the the patient’s skin to thicken. The loss hit him hard, and he vowed to do as much as he could to minimize the pain and tragedy caused by the ailment.

“That’s why I’ve been planning and hosting benefits for 25 years,” he says. “I reach out to a few of my comedian friends, and we get together and raise a bunch of money and give it to places that help people and cure people,” he adds. Saget is, rightfully, very proud of his charity work. And the fruits of his labor are as evident as they are rewarding. “People come up to me and say, ‘My wife’s in remission now, thank you,’ and that makes me feel good.”

Some of Saget’s recent scleroderma benefits have featured the likes of “SNL’s” Michael Che and “Last Week Tonight” host John Oliver, both of whom he admires greatly. “I get pretty much all of my news from those guys and a few of the other late-night hosts,” he says. And he’s not kidding. “I need to get my news from Colbert, Meyers and Kimmel because I just can’t watch actual newscasts anymore. I love stuff like Vice News, but it’s too depressing. It’s too real.”

The notion that the man whom you can currently see in seasons 1-3 of Netflix’s “Fuller House” as Danny Tanner, one of the nation’s most beloved TV fathers, was forced to settle on this “satire only” method of news consumption may be distressing to some, but don’t be too perturbed — there’s a glint of optimism behind this characteristically cynical stand-up’s exterior, particularly when he refers to his fiancée, Kelly Rizzo. “She’s half my age plus 7, which is how it works in LA, because we have great moral values,” he quips. “She has a life of her own and a career of her own, and there’s not much I can do for her except buy her stuff,” he adds. Between the end of his first marriage and now, a few women came and went, but nothing seemed to stick. “For some reason, they just don’t seem to make it,” he says. “I’m not saying they passed away, but two years goes by, and they might as well have.”

The joy in Saget’s voice as he talks about Rizzo is damn near palpable. “I’m usually a two year guy, but this is different. We haven’t set a date yet, but we’re not gonna be engaged for 10 years or anything like that. I wanna make her legal,” he jokes. “She’s a real friend.”

There’s more optimism in the mind of this professional cynic, and some of it is reserved for his first love: stand-up comedy. In the new special — which was recorded in May of 2017 at the Music Hall of Williamsburg in Brooklyn — the elegantly profane Saget sings songs, relives the moment he first learned about sex, talks about his fear of doves and shares a hilariously bizarre tale about a squirrel who eats frozen hemorrhoids. But it’s when he’s fondly looking back on his illustrious career in the business of show that he’s at his most endearing — not that we don’t love the penis jokes! “It was a really fun special for me to record,” he says. “I just do what I find funny. And the truth is funny to me.”

As far as future projects are concerned, Saget has just finished directing himself in an upcoming movie called “Benjamin,” which he’s very excited about. But which is the real him: stand-up comedian or actor? Despite becoming a household name for his tenure on incredibly popular TV shows like “Full House” and “Entourage,” the stage is clearly Saget’s home. “Stand-up is this thing where every time you do it, you understand why you have to keep doing it,” he says. And it’s clear how passionate he is about the art form. “There’s just nothing like it. I know from the crowd’s reaction and the way I’m feeling and how connected I feel to them that there’s something wonderful happening. It feels good to make people feel good,” he says. “I think everyone in the world could do with a laugh right now.”