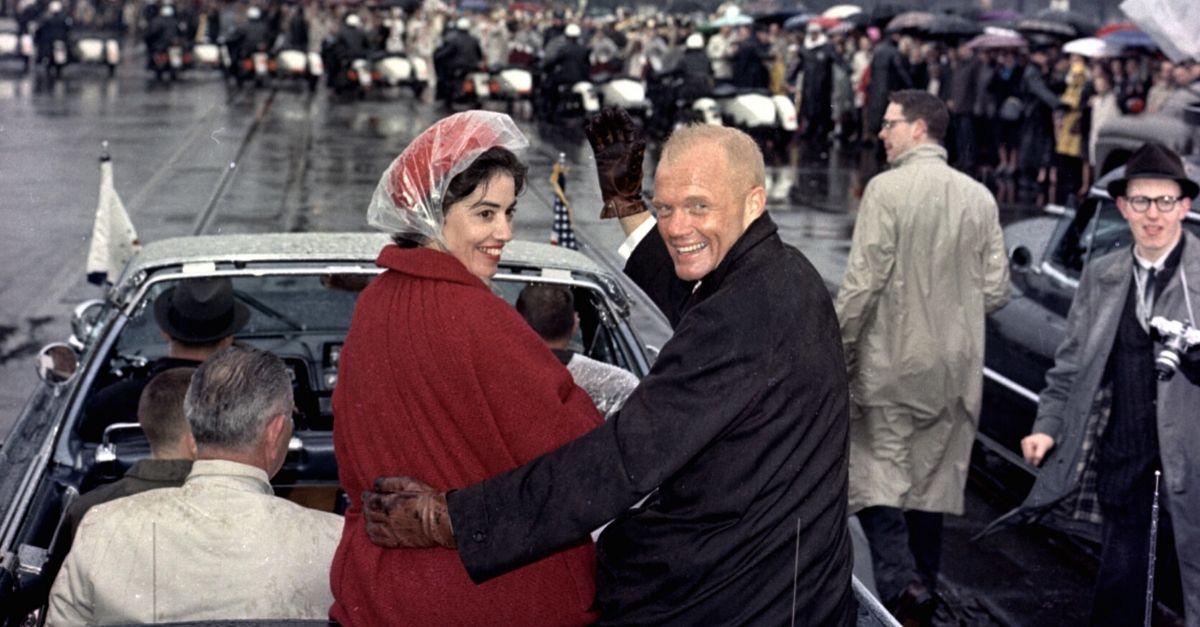 One of the best American love stories ever to be told is probably that of John Glenn and Annie Glenn. While John Glenn was an all-time American hero respected in making history, he constantly admired his own kind of hero: his wife Annie. And it’s no wonder he accredits her as his personal source of inspiration.

Because their families were friends, they grew up together in New Concord, Ohio. They basically shared the same playpen, expressing that there was, “never a time when [they] didn’t know each other.” John was the golden boy, doing it all in high school. He was a 3-sport varsity athlete, loved by everyone in town, and obviously smart enough to eventually become an astronaut and a politician. But Annie had a different experience.

Anna Margaret Castor was also known for being smart, bright, talented, and caring, but struggled immensely with a speech impediment. A severe stutterer, her speech impediment was categorized as an 85% disability, meaning that she couldn’t manage to make out words 85% of the time. In elementary school, she was ridiculed heavily after trying to recite a poem. Her communication disorders limited conversations over the phone or with a friend, often resorting to hand-written notes to communicate.

However, that did not stop the former astronaut from falling in love with the rare beauty that was Castor. Staying true to being high school sweethearts, the Ohioan natives both attended Muskingum College in New Concord. While Annie studied music, John studied chemistry. Annie was offered a scholarship to Julliard for her skills with the pipe organ, but chose to stay in Ohio, becoming the soon-to-be wife of astronaut and future U.S. Senator John Glenn.

They got married on April 6, 1943, but the struggles didn’t stop there. Annie found it difficult being a military wife since John was a US Marine Corps aviator, often feeling lonely and stuck every time John was deployed. In every new town, she made new friends in church by using her musical talents to play the organ. However, because of her speech impediment, in her loneliness, she would often have to creatively compensate for people not being able to understand her as she went about her errands.

John continued to add to his accolades by flying 59 combat missions in World War II and another 90 in the Korean War. Every time he left, he gave her the same goodbye, ?I?m just going down to the corner store to get a pack of gum.? And in a moment of intimacy between just them two, she would also respond to him the same way every time, ?Don?t be long.?

By February 20, 1962, a fateful day in American history, John had already been awarded 6 Distinguished Flying Crosses and 18 Air Medals from his time in US Marine Corps, taken the first-ever continuous, panoramic photograph of the United States, and was a part of the Mercury Seven, NASA’s first chosen astronauts. Before boarding the Friendship 7, the space shuttle that would carry astronaut John Glenn to become the first American to orbit Earth, John gave his wife Annie a present before he made history. It was a pack of gum that she carried close to her heart until he returned home.

In 1973, Annie found a doctor in Roanoke, Virginia, who ran an intensive program at the Hollins Communications Research Institute at Hollins College, that could help her speech impediment. After having no contact with family and friends for three weeks, she gave John a call.

When he heard her speak confidently and clearly for the first time, he dropped to his knees in prayer and gratitude, ?I saw Annie’s perseverance and strength through the years and it just made me admire her and love her even more… It takes guts to operate with a disability. I don?t know if I would have had the courage to do all the things that Annie did so well. We tend to think of heroes as being those who are well known, but in my book, Annie is one of those heroes.?

The power couple still didn’t stop there. Annie, with her golden heart, seized the opportunity to use her story for public service, now that her stuttering was gone. When John joined the political race for U.S. Senate, becoming the Democratic U.S. Senator from Ohio in 1974-1999, Annie supported him by giving public talks about the amazing support she had always received in their relationship from the man who always believed in her.

She used their platform to uplift those who felt that their voices were drowned out by their disabilities, just like she once had. She always immediately headed for those who had wheelchairs, always made the shyest people in the room feel comfortable, and even ended up learning sign language once she identified groups of deaf people appearing in the crowds. As she was saying “I love you” in sign language to a group of deaf people, U.S. Sen. John Glenn told reporters who were crowding him, “That?s what you should be covering,” while pointing at her.

Annie Glenn went on to become an adjunct professor at Ohio State University’s Speech Pathology Department. To this day, the department awards the “Annie Glenn Award,” a leadership award that is annually awarded to a special person who has done incredible work in speech and language pathology. Annie also received the first national award of the American Speech and Hearing Association for her work with those dealing with communication disorders. It’s no wonder she was John’s true hero.

The Glenn family became known, not only for their individual accomplishments and overcoming of obstacles but also for their love. They were always joking around each other, spreading their infectious love with others who were in the same room by finishing each others’ sentences. It’s clear as day that the stars John may have seen in outer space, couldn’t even compare to the awe he had with the star of his own entire life: Annie Glenn.