During President Trump’s visit to China, he made a lot of speeches, ate a lot of fancy food and spent some time touring the “Forbidden City.” But it was the commander-in-chief’s granddaughter, Arabella Kushner, who was the star of the show in the east.

Arabella, who is only six years old and speaks Mandarin, has met Chinese leader Xi Jinping already once before when he visited Mar-a-Lago in April. Upon landing in the nation, Trump showed the Chinese a video of his granddaughter singing a popular Mandarin song and reciting poems. She quickly went viral on the Chinese internet, despite the fact that YouTube, Facebook and Twitter are all blocked in the nation.

In her latest video, which was played for Chinese leaders, she began by greeting the premier as “Grandpa Xi” and his wife as “Grandma Peng.” She then sang a song about quiet lakes, lotus flowers and rice fields.

Arabella has been learning Chinese since she was old enough to speak, since her nanny is Chinese. The Washington Post reports that her performance made such a splash that the Chinese Foreign Ministry mentioned her in a press conference, saying “Arabella as a small messenger of Sino-American friendship is deeply loved by the Chinese people.”

On Wibeo (what the Chinese have instead of YouTube), the video of Arabella already racked up almost 12 million views by Thursday night.

Arabella is definitely one of the president’s favorite family members. He seems to gush about her constantly; in a July interview with the New York Times, Arabella and her mother Ivanka interrupted the Oval Office meeting. Trump introduced the youngster to two reporters, who she greeted in Chinese. He declared, “she’s great. She speaks fluent Chinese. She’s amazing.”

Of course, Arabella isn’t the only aristocratic offspring capable of bridging divides between nations–Xi Jinping’s daughter Xi Mingze attended Harvard University and graduated in 2014. But she didn’t make too much news as the storied institution has gotten pretty successful at hiding their famous pupils from the press — Malia Obama is a freshman at the school this year.

During his trip to the Asian peninsula, Trump has threatened war with North Korea and asked them to come to the table to negotiate. He has also criticized former administrations for making poor trade policies with the nation, saying “who can blame another country for being able taking advantage of another country for the benefit of its citizens … I give China great credit. In actuality, I do blame past administrations for allowing this trade deficit to take place and grow.” 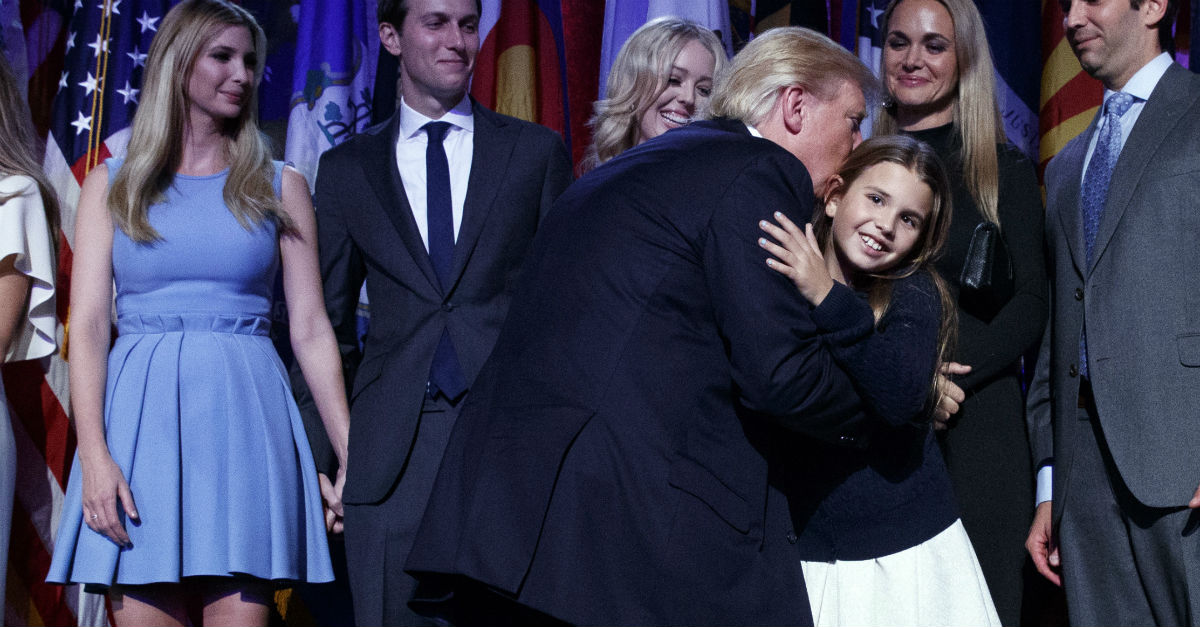