“I’m a Stud, I’m Ballsy”: Arnold Schwarzenegger Once Bragged About His Cigar Habit 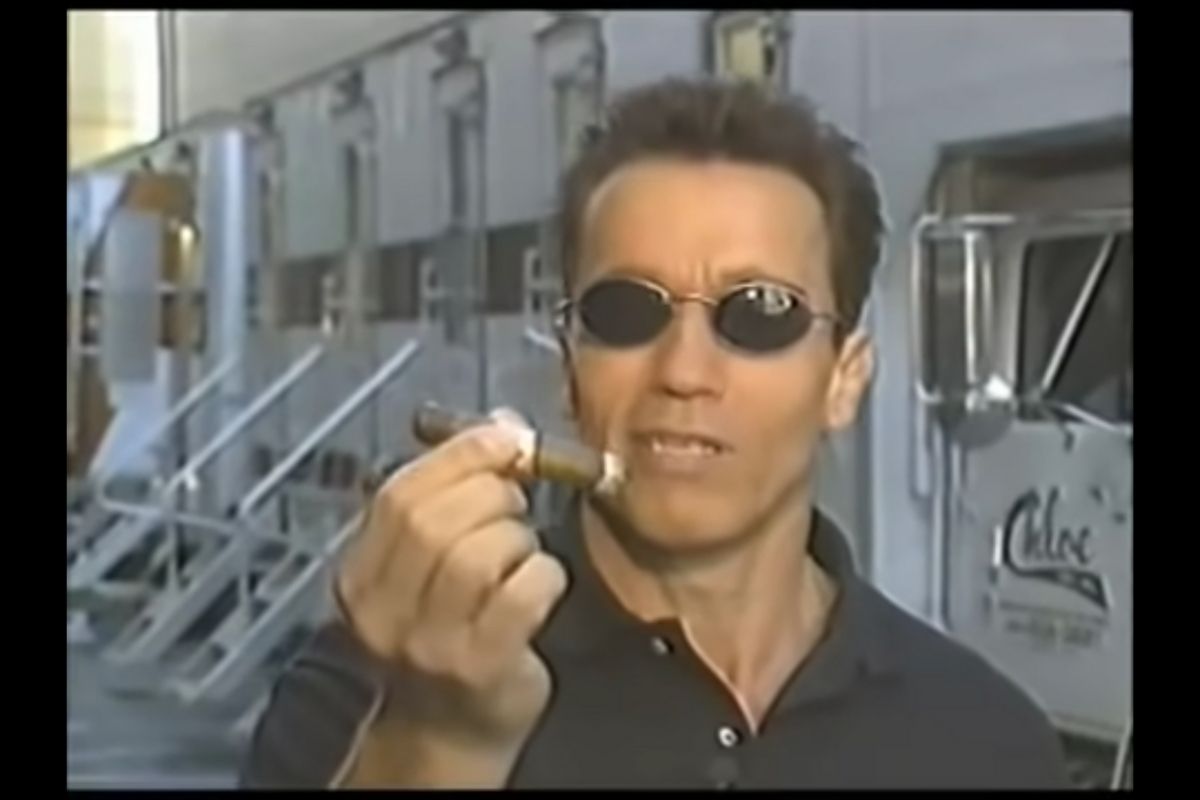 Movie star-turned-governor of California Arnold Schwarzenegger is a cigar aficionado. In fact, Cigar Aficionado magazine literally dubbed him “Cigar Smoker of the Year” in 2014. But an old video of a young, spunky Schwarzenegger best captures the Terminator’s true love — and cocky pride — for his longtime addiction. Seriously, this clip is hilarious considering how much Schwarzenegger’s image has changed over the years. Long before becoming an environmentally conscious bachelor, metaphorically wielding his Conan the Barbarian sword, Schwarzenegger was just young, flexing “stud” smoking stogies. Let’s all take a moment to remember.

Even at peak physical fitness during the Mr. Universe and Mr. Olympia bodybuilding competitions, Schwarzenegger was puffing away on stogies. In Pumping Iron, there’s footage of the muscular young man smoking, smoking while chilling back on a couch, eating fried chicken, and drinking wine. What a life. Watch that scene, in the video above, plus all the cigar-smoking in classic films like Predator, True Lies, and more.

In 1996 Schwarzenegger sat down with David Shaw from Cigar Aficionado at the Grand Havana Room cigar club in Beverly Hills, Los Angeles for a lengthy interview on his smoky fixation. Schwarzenegger shared, “I smoked little Virginians when I went to Munich as a bodybuilder,” he says, “but I didn’t smoke a real cigar until 1977 when I met Maria.” Apparently, Schwarzenegger’s father-in-law, Sargent Shriver, turned him on to the real deal: Cubans. Now the Hollywood legend’s favorite cigars are from Cuba: Punch and Cohiba. He has Cohiba Cuban cigars flown in for him during filming and enjoys his Punch cigar after dinner.

In the video, Arnold Schwarzenegger theatrically describes discovering his preferred kind of cigars through meeting his then-wife Maria Shriver‘s father. And like in the 1996 Cigar Aficionado interview, Schwarzenegger is sure to explain that Shriver can’t be mad about it. Although on video, he certainly sounds more defiant. And maybe even a little drunk:

“When my wife’s father has introduced me to stogies, what is she gonna say? She’s not gonna say ‘My father made a mistake’ because her father never makes a mistake.’ So therefore it is okay. I can smoke stogies around her, I can smoke stogies in my house. First of all, because her father introduced me to stogies, and second of all because I am a stud. I’m ballsy. I don’t take no sh*t from anyone. I smoke my stogie anywhere I want. I don’t have to find a hideout place like you. HA HA…”

Schwarzenegger then dissolves into some very pointed laughter, meant to remind us all that we are not the man. (Though, in 1996, he did admit “I won’t smoke upstairs, near the kids’ bedroom. Besides, I don’t want to stink up my clothes or the bedroom.”)

Some of the Chuck Norris-Esque comments on this old video are also pretty great. My favorites? “he doesn’t have clocks in his house, he just simply decides what time it is,” “Arnold didn’t dial the wrong number, you picked up the wrong phone,” “Arnold doesn?t mispronounce words, we?ve just been saying them wrong,” and “When Arnold turned 18, his parents moved out.” HA.

WATCH: Expendables Stars Sylvester Stallone and Arnold Schwarzenegger Once Hated Each Other