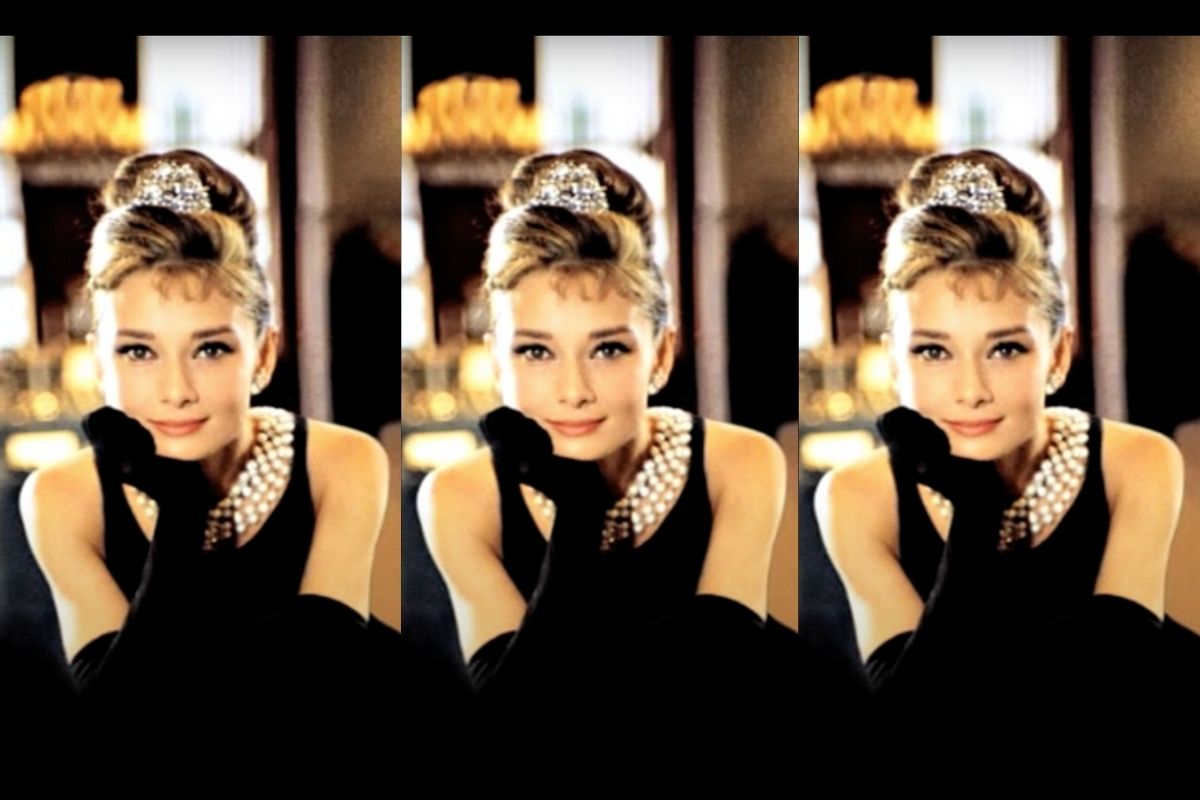 The long-beloved film Breakfast at Tiffany’s has been re-examined as of late for racist stereotypes. This month, Turner Classic Movies added it to their newly critical series, Reframed: Classic Films in the Rearview Mirror. And I would have to agree that certain aspects of the movie do not hold up. (Re: Mickey Rooney’s objectively terrible portrayal of Mr. Yunioshi.) But in the spirit of considering this work in a new light, let’s take note of one cinematic feature which has, undoubtedly, stood the test of time: the little black dress.

In my frank opinion, Blake Edwards’ Breakfast at Tiffany’s is semi-forgettable. Adapted from Truman Capote‘s — far more interesting — novella, the 1961 Paramount Pictures production condenses an unusual New York tale into a markedly flat, heteronormative romance. (In the book, the narrator remains unnamed and is heavily coded as gay. He maintains an appreciative and strictly platonic friendship with Ms. Golightly. But in the movie, this neighborly protagonist is unrecognizable, transformed into the love interest Paul, played by George Peppard.) However, the film is remembered — and revered — for one image in particular: actress Audrey Hepburn’s little black dress.

Styled with elbow-length black gloves, a heavy pearl necklace, diamond tiara, oversized sunglasses, thick winged eyeliner, and baby bangs poking out from a piled updo, the effect of this “plain” party dress is actually quite over-the-top. Yet the term “little black dress” has become synonymous with an easygoing choice and implies the casual freedom of just tossing something on. After all, who relish in skipping the morning dressing routine in favor of an LBD? For me personally, it’s a wardrobe backbone… one that I rely on far too often.

In true Holly Golightly fashion though, the dress is just a base — for not only wild accessorizing but her equally wild personality. In the classic movie poster, her cigarette holder flashes like a magic wand. On Hepburn, every moment, every still, is rich with inner life. So how did a comparatively muted dress become the true breakout star of Breakfast at Tiffany’s? (Hepburn, of course, had already appeared in Sabrina, Roman Holiday, and Funny Face… My Fair Lady would premiere three years later.) What exactly makes it so iconic?

First of all, let’s get one thing straight: despite getting called a “little black dress,” Holly Golightly’s dress is not small at all. It’s an evening gown: a true piece of couture that enhances her status within the highly commercial world of Breakfast at Tiffany’s. Fashion designer Coco Chanel popularized the concept of the “little black dress” as a timeless staple during the 1920s — long before Hepburn’s Golightly was wistfully traipsing down Fifth Avenue. But since then, Hepburn’s image has undoubtedly become part of its evolving definition.

The dress worn by Hepburn in Breakfast at Tiffany’s was designed by Hubert de Givenchy, custom for Hepburn. (Legendary Hollywood costume designer Edith Head oversaw the creation.) The final result was a slinky, floor-length, pure silk masterpiece. According to Vogue, Riccardo Tisci, the former creative director of Givenchy, has described the ensemble as “a perfect example of 1960s style: chic at the front, delicate, sensual and Parisian at the back.”

We first meet Holly Golightly, and her dress, in the opening scene of Breakfast at Tiffany’s. The spunky lady is window-shopping at the famed jewelry store, dressed to the nines and gnawing on a Danish pastry. The introduction takes its time, the camera panning around to Golightly’s back, highlighting Givenchy’s calculated shoulder blade cut-outs. Without the cigarette holder (which makes its appearance later in the film, at a party, once Golightly has changed necklaces) the heroine’s hands are busy with a mobile breakfast. It’s the perfect picture of this urban sprite who is so furiously invested in her own curation.

The high neckline and conservative midi-length actively work against any obvious sexualization. Compared to Marilyn Monroe’s white dress, designed specifically to stoke male fantasy, Hepburn’s dress is a girl’s dress. It’s yin and yang. It’s a gift to fashion-lovers, throwing together couturier elements with cluttered jewels: a female fantasy. The idea that any of us really resemble Hepburn when we “just throw on” a black dress is hilarious. But a girl can dream. And Golightly’s fabulously apathetic attitude — while rocking such a layered look — contributes to that dream.

Fun fact: Capote originally envisioned Marilyn Monroe as Holly Golightly and lobbied for the studio to cast her. Monroe, however, was still under contract with Twentieth Century Fox and could not star in the Paramount feature. What a different picture it would have been… almost certainly we would not remember the dress as we do now: so straight, so slim, and so seemingly simple.

WATCH: Why Marilyn Monroe’s White Dress Was So Iconic