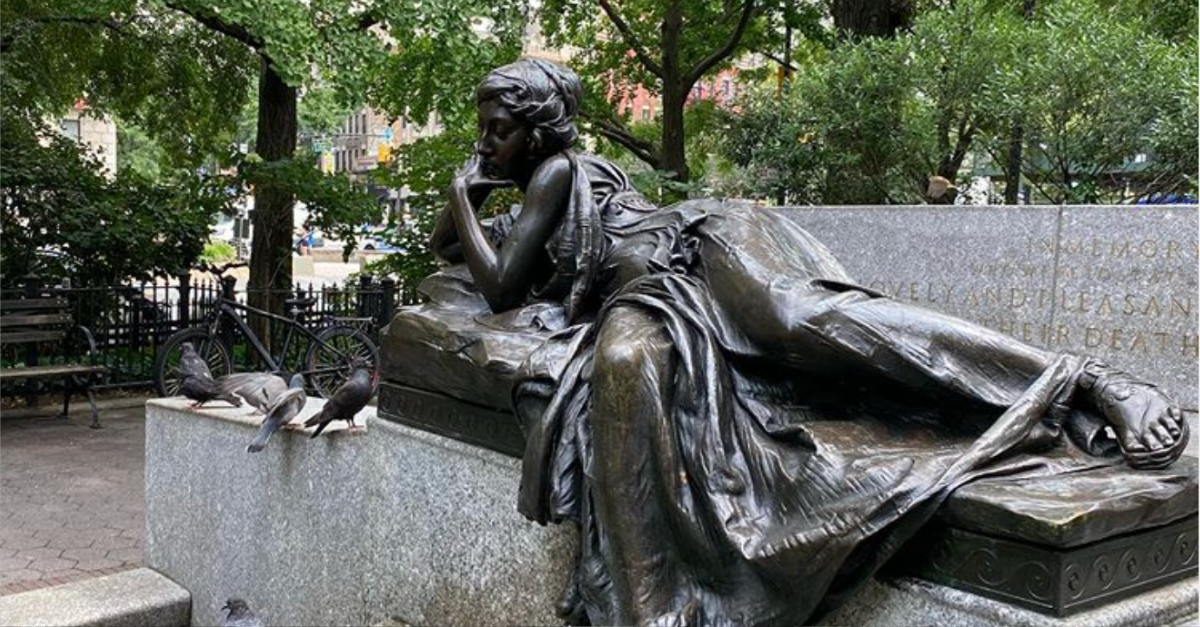 Audrey Marie Munson was the first American supermodel. Her statues are littered throughout New York City with more in Wisconsin and Missouri. The latter both have her likeness over their state capitol buildings. There is a statue of her in the Sleepy Hollow Cemetery in Concord, Massachusetts and she once was on the Walking Liberty Half Dollar. Alas, her story is a tragic one.

Born in Rochester, New York, to parents who divorced before she even saw ten years old, because he was having an affair with another woman. Her mother raised Audrey. At the age of five,  she was told her fortune by a Gypsy woman in east Syracuse. She said:

“You shall be beloved and famous. But when you think that happiness is yours, its Dead Sea fruit ?shall turn to ashes in your mouth. You, who shall throw away thousands of dollars as a caprice, shall want for a penny. You, who shall mock at love, shall seek love without finding. Seven men shall love you. Seven times you shall be led by the man who loves you to the steps of the altar, but never shall you wed.”

The story of Audrey Munson begins with her debut on stage in Gerald Hampton’s Dancing Dolls at Rocky Point Amusement Park in Warwick. She appeared on Broadway in The Boy and the Girl, The Girl and the Wizard.

After being a broadway chorus girl, Munson began modeling in New York City and was the Beaux-Arts scene doll. She was first found by photographer Felix Benedict Herzog. and posed for his friend Isidore Konti, for the sculpture, The Three Graces. This was when she posed nude for the first time, and her sculpture was displayed in the New York Hotel Astor’s main ballroom. She posed as a goddess-like character for painters, artists, a tapestry weaver, including Gertrude Vanderbilt Whitney, Alexander Stirling Calder, Daniel Chester French, and Adolph Alexander Weinman. She can be seen in the Metropolitan Museum of Art, “Civic Fame,” on the Manhattan Municipal Building. The 25-foot copper statue, designed by Alexander Weinman, is the second-largest in New York – after the statue of liberty. She is outside of the New York public library, in Central Park, near the plaza hotel, and presented as the female version of the United States, riding a seashell chariot with hippocampi, a seahorse/horse breed.

The USS Maine National Monument at Merchants‘ Gate of Central Park was dedicated in 1913 to the men killed aboard USS Maine when the ship exploded in the harbor of Havana. Designed by Harold Van Buren Magonigle and sculpted by Attilio Piccirilli. It shows Columbia triumphant in a seashell chariot being drawn by three hippocampi modeled by Audrey Munson #ussmaine #columbiscircle #columbia #hippocampi #havana #harolvanburnmaginigle #newyork #publicart #attiliopiccirilli #audreymunson #centralpark

In 1913, the New York Sun read ?All New York Bows to the Real Miss Manhattan.? She was also dubbed “The American Venus” as she posed for 3/5 of the in 1915’s San Francisco Panama?Pacific International Exposition. All in all, she posed for over 200 artists. However, she was making little to no money, so she branched out into something else.

In November of 1915, she starred in a ‘motion picture.’ The industry was new, and she wanted to be apart of it. In her first silent film, Inspiration, she appeared nude, as a sculptor’s muse. The movie was the first non-pornographic film to show a naked woman’s body. It was almost a biographical film about a young woman who was discovered by a sculptor. But, the NYC crowd were prudes!

Munson and her mother moved to California to appear in another movie, Purity, in 1916. It was successful but received mixed responses. Her last film, The Girl O’ Dreams, was never even released, for reasons unknown. The Munsons returned to NYC. Audrey and her mother had previously stayed in a boarding house in New York City, owned by a doctor named Walter Wilkins. In February 1919, Wilkins murdered his wife with a lead pipe and hammer. Police learned that Wilkins was obsessed with the young woman who used to be a tenant. It was believed that he’d killed his wife to be with her. Audrey and her mom were living in Canada when the police came to inquire about the situation. Even when she denied having any connection to Wilkins, her name was still attached to his story. He was sentenced to the electric chair but hung himself before the time came. The blow of the negative publicity killed Audrey’s career.

In 1921, she attempted to get some publicity for her film, Heedless Moths, by partnering with an American newspaper, Hearst, with a series of articles called “The Queen of the Artists? Studios,” where she talked about being a muse, but others profited from her image instead of her.

Our muse, Audrey Munson, was the inspiration for the golden lady that sits on top of the #madisoncapitol. [photo 2 credit: @tepule4all] #madisonwi #downtownmadison #statecapital #audreymunson

Jobless, Audrey and her mother moved to Syracuse, where her mother peddled kitchen utensils. What can only be described as the tragic life of Audrey Munson went further downhill from there. By the age of 39, she was known as the “once famous artist’s model.”  On her 40th birthday, her mother committed her to the St. Lawrence State Hospital, an insane asylum in Ogdensburg, New York. She remained there for 65 years, fading into obscurity until her niece Darlene Bradley discovered her 93 years old. Audrey Munson died at 104 in February 1996. America’s first supermodel was buried at the New Haven Cemetery in an unmarked grave until amends were made nearly twenty years later. Her family added the words ‘Actress and Model’ were etched into her tombstone.

In 2017, one of her sculptures was returned to the Manhattan bridge as “Miss Manhattan” alongside “Miss Brooklyn,” created by sculpture Daniel Chester French. Audrey Munson is everywhere you look in New York today.

Watch: Gwyneth Paltrow Poses in Her ?Birthday Suit? For Her 48th Birthday