Axl Rose Once Threatened David Bowie For Flirting With His Girlfriend 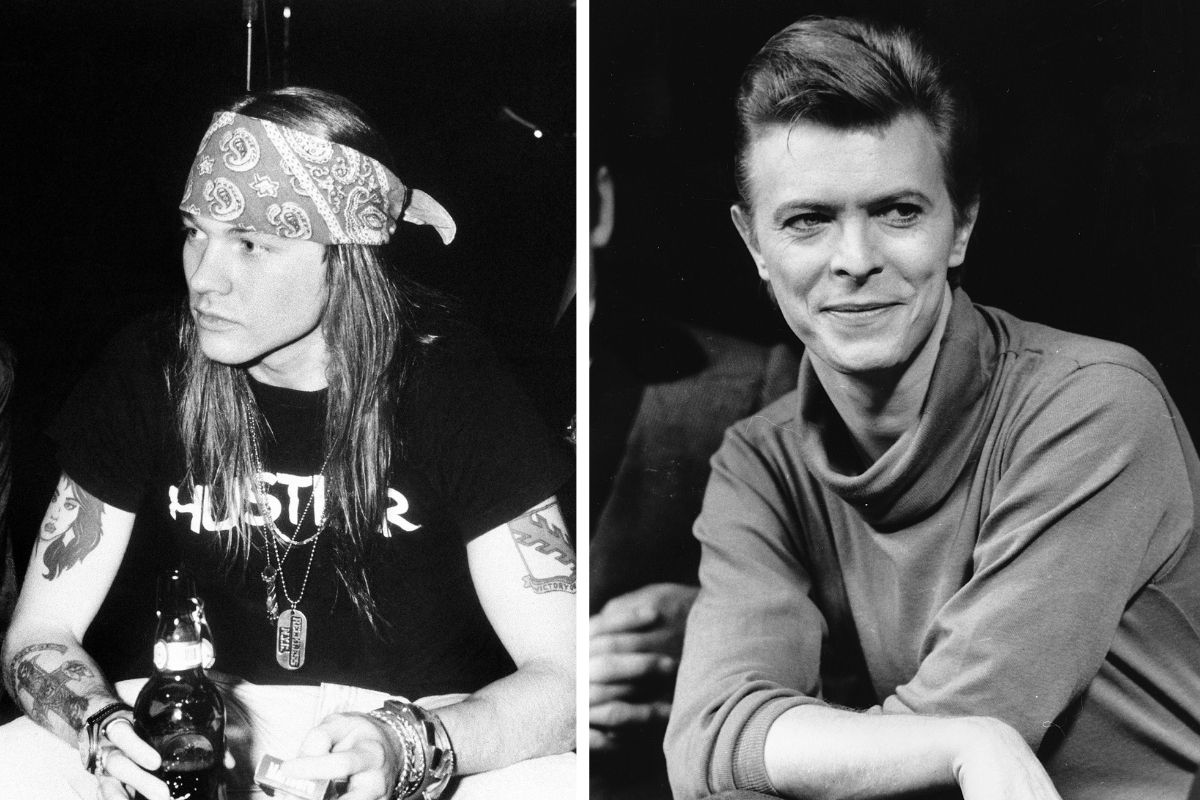 Erin Everly was only married to Guns N’ Roses frontman Axl Rose for a few months. But in that brief time, Everly inspired “Sweet Child O’ Mine” and garnered enough rare, romantic GNR memorabilia to make a small fortune when it auctioned it all away in 2013. So what was the sour love story between Axl Rose and his original muse? Suprise: it involves David Bowie.

Erin Everly was born in 1965 in Los Angeles, California. The daughter of country-rock singer Don Everly, of Everly Brothers fame, and Venetia Stevenson, this little girl was destined for a life entwined with showbiz. She moved to New York City to pursue modeling during high school and appeared in ads for Bebe, Guess, and other popular brands. During the 1980s, she met Guns N’ Roses lead singer Axl Rose (born William Bruce Rose Jr. and raised as William Bruce Bailey) and struck up a tumultuous romance. Smitten with the young model, the young songwriter from Indiana penned “Sweet Child O’ Mine” in her honor. It appeared in 1987 on the rock band’s smash-hit debut album Appetite for Destruction, alongside other singles like “Welcome to the Jungle” and “Paradise City.” The album remains one of the highest-grossing in United States history.

The simple “Sweet Child O’ Mine” music video featured a cameo by Erin Everly alongside the retro rehearsal footage of Axl Rose, Slash, Izzy Stradlin, Duff McKagan, and Steven Adler. This video found a fanatic audience on MTV while the song itself gained wide radio play. Even today, the “Sweet Child O’ Mine” music video boasts over a billion views on YouTube.) Everly and Axl Rose wed in Las Vegas in 1990, at the height of Rose’s Appetite for Destruction fame. But the couple’s marriage lasted for less than a year. Rose filed for divorce only a month after the wedding but quickly reconciled with Everly, who announced she was pregnant — and Rose was the biological father. But after suffering a miscarriage, Everly finally left Rose and the marriage was annulled.

Erin Everly would later remarry businessman John C. Portman, have three children, and eventually divorce again. But the rocker Axl Rose never had another spouse. He dated supermodel Stephanie Seymour, who appears in the GNR music video for “November Rain” but they separated shortly before Everly went public with the history of Rose’s physical and emotional abuse in 1994. The multi-million dollar lawsuit against her ex was settled outside of court but the revelations were damning. As reported by AP, Everly described Rose as “punching her, slapping her, shoving her, kicking her, tying her up, gagging her, spitting on her and dragging her by the hair.

After one beating… Everly passed out and woke up in a hospital to learn she had been injected with heroin and cocaine and gone into cardiac arrest.” With such horrific memories, it’s no wonder Everly hawked her seemingly sentimental Guns N’ Rose memorabilia in 2013. The value of a batch of Rose’s letters was approximated between $600 and $800. The flannel he wore in the “Welcome to the Jungle” supposedly went for up to $2,000, with the doomed couple’s wedding video fetching even more according to Rolling Stone.

In Slash’s eponymous 2008 memoir, the Guns N’ Roses guitarist opened up about the romantic quarrels of band member Axl Rose for the first time. David Bowie, surprisingly, played a role. The world-famous glam rocker had been an acquaintance of Slash’s for some time’ Slash’s mother Ola Hudson designed many of Bowie’s costumes. Bowie stopped by The Cathouse — the famed Rolling Stones venue — while GNR was shooting they’re “It’s So Easy” music video. The film featured Erin Everly in bondage gear, and Bowie apparently could not resist. He made a drunken pass at Rose’s girlfriend.

Later that night, when Rose and his bandmates took to the Cathouse stage, Bowie had a front-row seat beside Hudson. Intimidated and insanely jealous, Rose began to lash out verbally at Bowie. Right into the mic. Rose ended up chasing Bowie right outside, reportedly screaming, “I’m gonna kill you, TIN MAN!” Although the anecdote is not so serious, it’s clear that the relationship between Erin Everly and Axl Rose was always a mess. But their twisted intensity undoubtedly changed rock and roll history.

WATCH: Keith Moon’s Final Performance with The Who