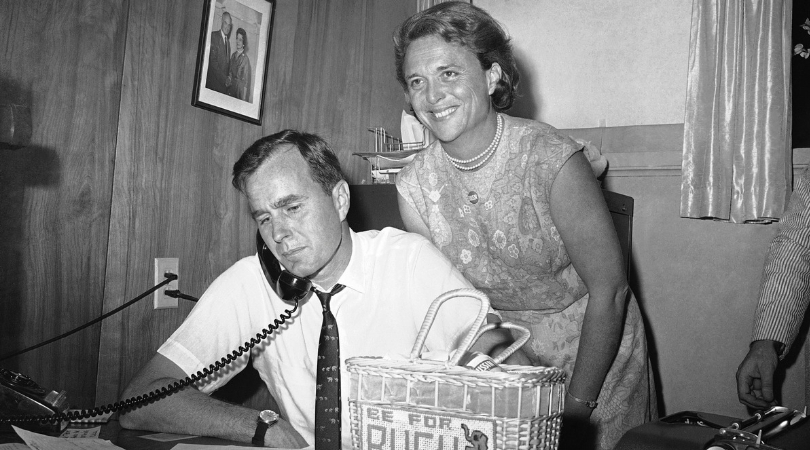 In a new biography about the details of the Bushes’ time in the American spotlight, it was revealed that former first lady, Barbara Bush, suffered from suicidal thoughts due to her husband’s alleged decade-long affair. According to Susan Page, author of “The Matriarch: Barbara Bush and the Making of An American Dynasty”, which is currently sold on Amazon, Bush suffered from severe depression, which almost took her life in the mid-1970s.

The biography reveals special details about the Bushes’ love life that “run contrary to the love story-like” image of the marriage several Americans thought the couple had. The book stated that Barbara found herself falling into the “worst personal crisis” that she had ever faced, since her daughter Robin who had died more than two decades before the alleged affair. Bush was so overwhelmed by the pain and loneliness, that she at one point contemplated suicide. Page stated, “She would pull over to the side of the road until the impulse to plow into a tree or drive into the path of an oncoming car had passed.”

Bush’s affair was rumored to be with his personal aide Jennifer Fitzgerald, while Bush was the Republican National Committee chairman in 1973-1974. Fitzgerald was small, blonde, and seven years younger than the former first lady, and was divorced. She was said to be fiercely protective and loyal to George W. H. Bush and remained his gatekeeper while serving as vice president for two terms under Ronald Reagan.

When Bush was elected president in 1988, he moved Fitzgerald into a State Department Job. How did Page find out about the affair? Apparently, one individual from the Bushes’ inner circle was the one who told Page that the former president was “simply captivated” by Fitzgerald when they first met. Both Fitzgerald and Bush denied the rumors, but a diary entry left by Barbara showed otherwise.

The former first lady, who was 50 at the time of the alleged affairs, stated she would spend every night crying and telling her husband how empty she felt because of the affair, wondering why he didn’t leave her. But, what several didn’t know is that Bush’s secretive life after becoming head of the Central Intelligence Agency in 1975 only made it worse for his wife.

Now, whether these were just plain rumors or an actual occurrence that happens, well, we will never know. Barbara Bush died on April 17, 2018, in Houston Texas at the age of 93. George H. W. Bush died a few months after her on November 30, 2018, at the age of 94. So, I guess that’s up to speculation, but it sure is something to wonder about. I guess we all have secrets, huh?