Did You Know Betty White Was a Game Show Star? 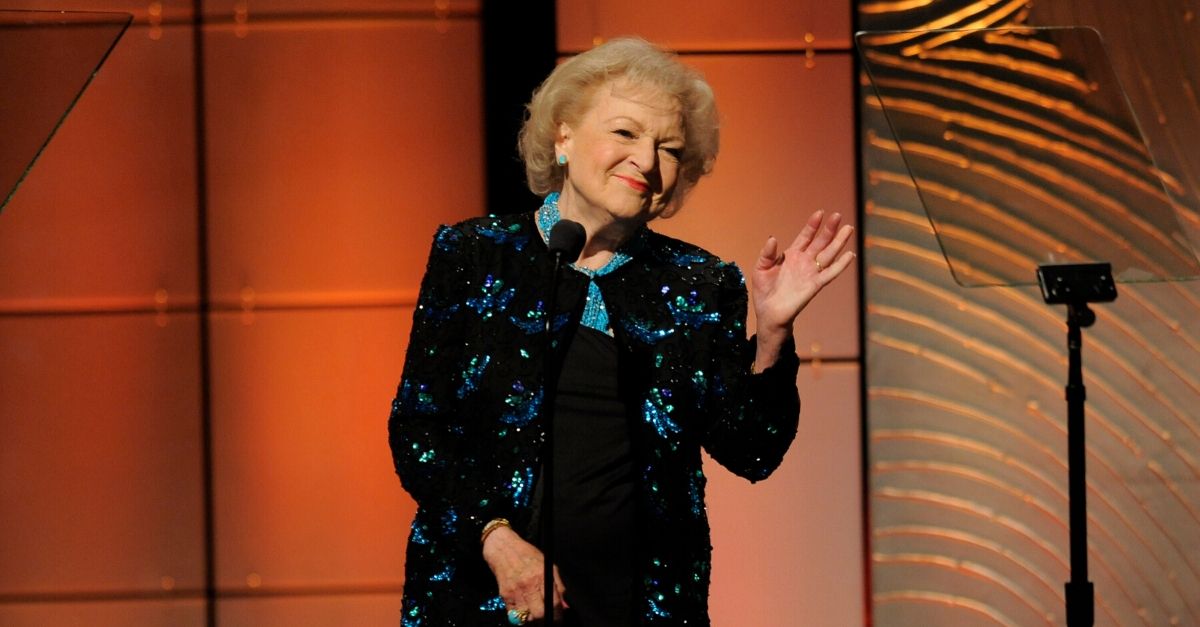 It’s no doubt that Betty White is everyone’s favorite. At 98-years-old, she has no plans of stopping or retiring from her Emmy award-winning career, valuing acting as more of a passionate pastime than just a source of income. And just as one would expect from a Hollywood favorite that’s been around as long as she has, The Golden Girls star has quite the track record in the acting world. But before she started her 80-year-long tv-series career, did you know that Betty White was actually a game show star?

Born on January 17, 1922, Betty began to show her potential as the perfect contestant in her quick and clever wit while growing up playing games. In her book Here We Go Again: My Life in Television, she wrote, “Mom and Dad and I had always played games since as far back as I can remember. Some we made up as we went along — at the table, in the car, wherever — so playing on tv was a bonus. Where else can you spend a couple of hours playing games with nice people and get paid for it?”

Her knack for quick humor and clever ad-libs came from the quick banter that ran in her family. She remembered how her “dad had a way with words” as he joked about how much of her skills she gave away freely before she became a star. But her first appearance on television was actually a complete accident.

Betty White originally wanted to be a writer. She explained in her book, “My big ambition was to be a writer, until I wrote myself into the lead in our graduation play at Horace Mann Grammar School. It was then that I contracted showbiz fever, for which there is no known cure.” Then, in 1939, after singing at her own high school graduation, she and another student were chosen to be part of an “experimental television transmission.” Although it was only shown throughout a six-floor building, she was leading the way.

Soon enough, in 1949, after 10 years of radio experience, Betty landed her first paid tv gig. She was first a guest on The Dick Haynes Show, and later became a regular on the short-lived sitcom, Tom, Dick, and Harry. Her quick wit eventually led to a spot on a new game show at the same station, finally kicking off her early career in showbiz.

The game show was called Grab Your Phone, hosted by Wes Battersea. With four female panelists, each with a phone in front of her, Wes would ask a question to the audience. As the audience phoned in to answer, the girls would answer the phones. Betty mentioned in her book, “It must have looked like a tiny telethon. But we weren’t taking pledges- we were giving out five whole dollars for each correct response!”

The Mary Tyler Moore Show star was so smart about handling herself, that when the producer told her she was getting paid more than the other girls, she still kept that secret to herself in fear of actually being the one underpaid. This just shows why Betty was such a natural in game shows. She was not only clever enough to ad-lib well for entertainment but also smart enough to make sure she was in a good position for her career.

Grab Your Phone ignited her passion for game shows. As another testament to her love for showbiz as a pastime instead of a money-maker, Betty explained in her book, “It was my first and served as the precursor to countless TV games I would be playing through the years. You name it, I’ve played it. Not just because I was hired to do so, but because it was so much fun. Still is.”

Soon enough, her appearance on Grab Your Phone reached Al Jarvis in Los Angeles, California. Al was starting a daytime tv show called Hollywood on Television and wanted Betty to be a daily part of his show. “Before I could recover enough to respond, Al continued, saying that not only would I be his Girl Friday, but I’d be his Girl Monday, Tuesday, Wednesday and Thursday as well,” Betty explained. Remembering when she accepted his offer, she stated, “I had had no way of knowing that my lifelong love affair with television had just begun.”

And soon, the legacy she was truly known for began. Hollywood on Television inspired Betty to co-start Bandy Productions. She produced and starred in Life with Elizabeth in 1953, Date with Angels in 1957, The Mary Tyler Moore Show in 1973, and The Betty White Show in 1977. She was then finally cast with co-star Bea Arthur as Rose Nylund in The Golden Girls in 1985, one of her more career-defining roles.

Her career in comedy tv series never stopped, appearing on ABC, NBC, and CBS. She made appearances on many of their comedy series including The Carol Burnett Show, Mama’s Family, 30 Rock, Community, and Saturday Night Live. She’s also known for her role in Hot in Cleveland on TV Land.

But her acting career didn’t get in the way for her love for game shows. She continued to appear on plenty more including, To Tell the Truth, What’s My Line?, and Password. And in 1983, she was the outstanding game show host of her own game show called Just Men!.

Betty has such a history with game shows, she even married Password host Allen Ludden in 1963. She remembers being unable to even go on a honeymoon because he already needed to be back on the show. However, her positive bright soul and light shone through when she explained that, “…as a wedding present, Jack Paar came on as a guest… Bless his heart. They had always wanted him to come on as a guest, and he wouldn’t. But as a wedding present, he [came on Password] as the opposing player. That was fun,” she continues, “Do you realize what privileges those are to have things like that happen? I think sometimes, I mean, I’m the luckiest old broad on two feet to get chances to do that, and I treasure them.”

As if you couldn’t love Betty White anymore, her humility is always refreshing. She said while accepting the Lifetime Achievement Emmy in 2015, “I had no idea that I would still be around at this point for one thing, but that I’d still be privileged enough to still be in this business. It is such a privilege. And the bottom line I think to the television business is that unless you’re a real bad egg, it is such fun. It really is. Thank you, thank you from the bottom of my heart.” Betty White is truly the queen of television.

Watch: Happy 98th Birthday, Betty White! Here are 5 Facts About One of the Funniest Women in Hollywood