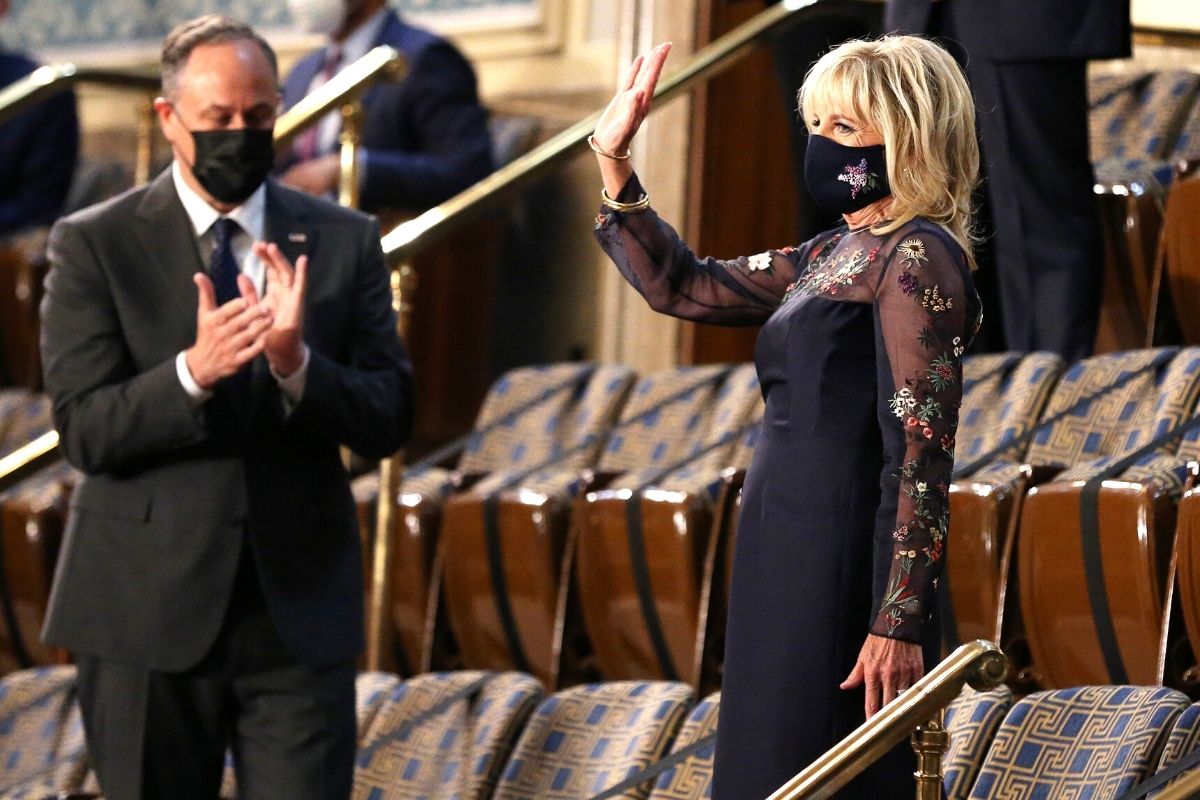 Throughout the Trump presidency, the women of Congress wore white on political occasions to symbolize unity and call back to the Suffragette movement; save for 2018, when the color was black in honor of #MeToo and the Time’s Up campaign. But now, after 100 days of Joe Biden in office, color speckled the Capitol building during his first joint session of Congress: hues of Democratic blue, seasonal fuchsia, and floral face masks could be spotted clearly throughout the small, socially distant crowd. Though it was First Lady Jill Biden who really stole the show.

From the moment Dr. Jill Biden stepped out on inauguration day in that icy blue get-up by Markarian, it was clear she’d use her new platform to exhibit some seriously show-stopping looks. (Who could forget, just this month, when she shocked the world by deplaning Air Force One in black fishnets and booties?) Throughout her brief time as the First Lady, Biden has flaunted mainly American designers and last night, at her husband’s joint address, was no different.

The 69-year-old Biden wore a creation by the Uruguayan immigrant designer Gabriela Hearst. Its navy sheath dress was overlaid with a hand-embroidered mesh top featuring the official flowers from all 50 states, in addition to the District of Columbia and every U.S. territory. Going into detail on her website, Hearst explained that the flower from Biden’s home state of Delaware, a peach blossom, was positioned above her heart with the other 55 blooms branching out from there. And if this look seems familiar, you’re not wrong. Biden wore a white version on inauguration night when she stepped out to view celebratory fireworks from the White House.

Hearst’s designs are also well-known for their sustainability; in this case, Hearst explained the recycled journey of the dress’s materials on her Instagram:

“The Silk Wool dress (and mask)was made entirely of existing fabrics. Made and embroidered in New York. It was originally used to fit the inauguration one. The First Lady requested to salvage for another occasion. Double repurposed. New is not always better..”

Throughout President Joe Biden’s speech, VP Kamala Harris stood resolutely beside the president. This is standard procedure, of course, but as the first woman in the role, that means Harris’ sartorial choices are under sustained scrutiny. But she impressed in a cream-colored blazer set by Prabal Gurung. And note the unconventional twist on her classic pearls! The accessory is a front-facing cuff choker, wrapped around the back of her neck and punctuated with two solid pearls.

Gurung, the excited designer, took to Twitter during the event, boasting Harris’ “Hand Tailored Double Crepe Cream Suit and Ivory Silk Charmeuse Camisole… made in New York City, at the Prabal Gurung Atelier, and designed for power moments in history.”

Harris has certainly faced some style criticism. But for the most part as Vice President, she’s flexed the creative fashion of many black designers, including Pyer Moss, Christopher John Rogers and Sergio Hudson. (Gurung, who Harris wore last night, is Nepalese and based out of New York.) No doubt the entire Emhoff-Harris family is fashion-forward. Harris’ stepdaughter Ella Emhoff recently signed with IMG models — along with the 2021 inaugural poet Amanda Gorman.

For the first time in U.S. history, two women will be seated behind the president as he addresses a joint session of Congress.