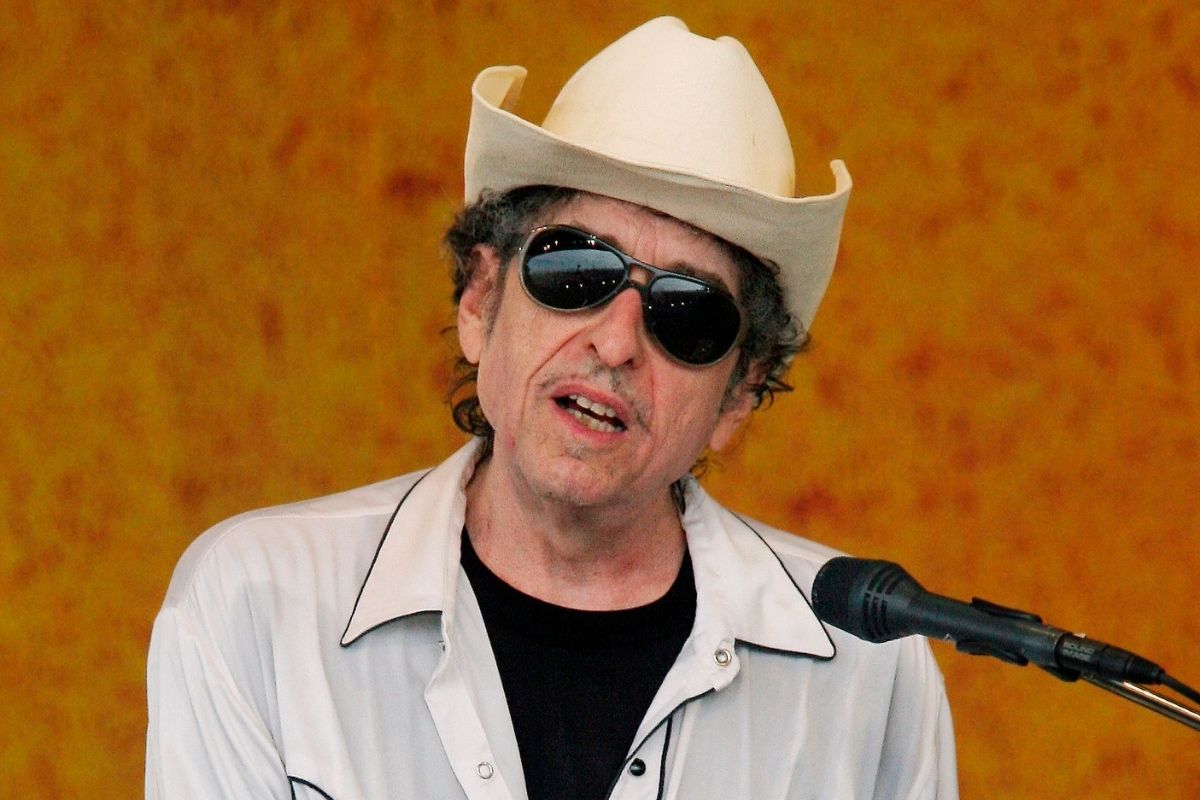 Today is singer-songwriter Bob Dylan’s eightieth birthday, and it’s worth commemorating the legacy of this ultimate troubadour. Throughout the twentieth century, Dylan’s unique songs became anthems to their respective eras. And his artful, thoughtful lyrics continues to define decades.

Robert Allen Zimmerman was born on May 24, 1941, in Duluth, Minnesota. Dropping out of the University of Minnesota at the end of his first year, Dylan traveled to New York City in 1960 to perform at clubs like The Gaslight. In January 1961, Dylan visited his personal hero Woody Guthrie, one of the most significant figures in western folk music. Guthrie was institutionalized in New Jersey at the time, for Huntington’s Disease, and the visit greatly inspired the young Dylan who went on to become the leading songwriter of the American folk music revival.

Dylan released his debut album, a folk-heavy, self-titled record, in 1962. But his breakthrough the following year with The Freewheelin’ Bob Dylan. His famous songs “Blowin’ in the Wind” (1963) and “The Times They Are a-Changin’ ” (1964) served became natural symbols for the passionate civil rights and anti-war movements.

Though he resists the title, by 1965 and 1966, Dylan was considered the “spokesman of a generation.” By that time, his sound was infused with more rock-inspired instrumentals. Soon, Dylan would record three of the most important, influential rock albums of the all time — in a mere matter of fifteen months: Bringing It All Back Home (1965), Highway 61 Revisited (1965), and Blonde on Blonde (1966).

Rolling Stone commented on his six-minute single from 1965, “Like a Rolling Stone”: “No other pop song has so thoroughly challenged and transformed the commercial laws and artistic conventions of its time, for all time.” Bruce Springsteen is quoted as saying the song was like “somebody kicked open the door to your mind” while U2’s Bono calls it “a black eye of a pop song.”

In July 1966, Dylan quit touring after a severe motorcycle accident, but that didn’t stop him from making music. He continued to record with The Band, a Canadian-American rock group that included Rick Danko, Garth Hudson, Richard Manuel, Robbie Robertson, and Levon Helm. They recorded The Basement Tapes in 1975.

During the late 1960s and early 1970s, Dylan started to record more country music: John Wesley Harding (1967), Nashville Skyline (1969), and New Morning (1970). In the late 1970s, Dylan became a born-again Christian, releasing a series of gospel albums. Dylan, however, has stated that his spirituality indeed derives from music rather than sermon: “I don’t adhere to rabbis, preachers, evangelists all of that, I’ve learned more from the songs than I have from any of this entity,” he told Newsweek in 1997. After returning to rock, the most noted of Dylan’s later works include Time Out of Mind (1997), Love and Theft (2001), Modern Times (2006), and Tempest (2012). In 2020, Dylan released his longest-ever song, a nearly 17-minute rumination on the death of JFK: “A Murder Most Foul.”

In addition to being a legendary songwriter and one of the best selling musicians of all time — selling more than 100 million records — Dylan is a venerable author and painter. He’s also also received notable awards like the Presidential Medal of Freedom, ten Grammy Awards, a Golden Globe Award, and an Academy Award. He’s been inducted into the Rock and Roll Hall of Fame, Nashville Songwriters Hall of Fame, and the Songwriters Hall of Fame. And in 2016, he won the Nobel Prize for Literature “for having created new poetic expressions within the great American song tradition.”

Dylan has also toured with some of the biggest legends in music. In 1988, co-formed the musical supergroup The Traveling Wilburys along with fellow celebs Tom Petty, George Harrison, Roy Orbison, and Jeff Lynne. The same year, the record Dylan and the Dead was released, compiled from live recordings of his 1987 tour with the Grateful Dead. Unfortunately, that received negative reviews and was called “quite possibly the worst album by either Bob Dylan or the Grateful Dead.” Ouch!

Nevertheless, Bob Dylan has ultimately made one of the biggest impacts in music history and will always be known as one of the greats. By the 2010s, he recorded a series of three albums inspired by traditional American standards. Again, Bob Dylan’s career was defined by his ability to make music that became anthems of specific eras in American history. Still releasing impactful music today, he announced that he’s releasing a double album in June 2020 called Rough and Rowdy Ways, his first album in eight years. He had been touring steadily since the 1980s, what’s referred to as the Never Ending Tour.

Bob Dylan is notoriously private. His most recent marriage, to back-up singer Carolyn Dennis, was not revealed until the publication of a 2001 biography — nine years after the couple’s split! Dylan and Dennis even share a daughter together, born in 1986, who was kept secret. That child is Dylan’s sixth; during the ’60s, Dylan had five children with ex-wife Sarah Lownds (including the adoption of her daughter from a previous marriage).

It’s believed that Dylan resides primarily in Point Dume, on the coast of Malibu. Though the multi-millionaire — Dylan sold his entire catalogue to Universal Music Group for an undisclosed amount last year — owns 17 houses around the world. This month, Dylan was spotted for the first time in a decade walking through the Santa Monica neighborhood of Los Angeles. In the viral photo, seen above, Dylan appears to be a wearing a wedding ring..! Whatever that means, we hope Dylan is enjoying his 80th birthday today surrounded by friends and family.

Editor’s Note: A version of this article was originally published May 25, 2020.

WATCH: Our 15 Favorite Classic Rock Songs Of All Time