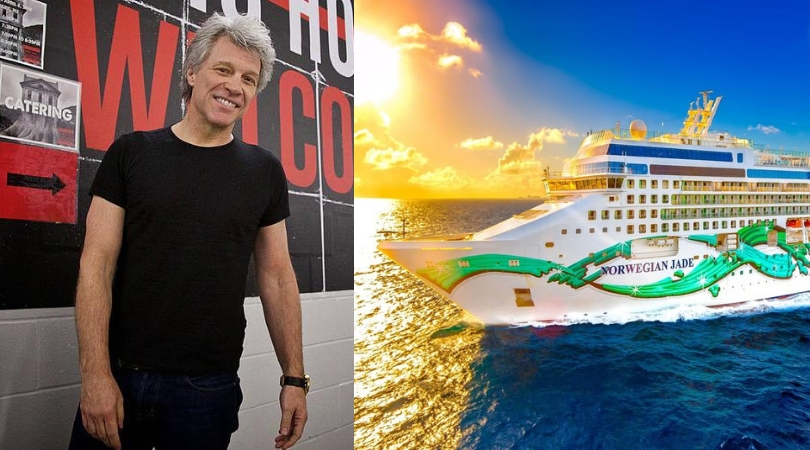 Well, color me stoked! It looks like my summer plans have been made, and I am packing my bags asap! Superstar Jon Bon Jovi has announced he will be headlining the “Runaway to Paradise” cruise on Norwegian Cruise Line’s ‘Norwegian Jade’ ship this summer!

The rockstar will be joined on board by his 24-year-old son, Jesse Bongiovi, who is his business partner in ‘Hampton Water Wine’ which was recently named best rosé of 2018 by Wine Spectator. The wine will, of course, be offered on the cruise, because well, it’s delicious.

The ‘Runaway to Paradise with Jon Bon Jovi’ has two different destinations. One ship will sail the Caribbean by traveling from Miami to Nassau, Bahamas. The second option will sail the Meddeteranians, starting in Barcelona and sailing to Palma Majorca. The Caribbean will sail April 12 to the 16th and the Mediterranean will sail August 26th to the 30th.

We don’t run and we don’t back down 👊 Watch a live performance of #WeDontRun on Bonjovi.com or YouTube.com/Bonjovi.

Norwegian has partnered with Sixthman, a company that specializes in putting on music festivals at sea, for an immersive experience that includes a pop-up shop of Hart N Dagger (Bon Jovi’s unique clothing line), live band karaoke, speaking panels, a question and answer session, and Hampton Water Wine tasting happy hours. I don’t know about you, but that sounds like a dream come true to me!

The singer also stated there will be a pop-up version of his restaurant “The Soul Kitchen” as he and cruisers will be able to give back to families in need with their purchase.  In addition to the 57-year-old as the headlining act, the performance lineup includes Beth Thornton, Tonic, Collective Soul, and Slippery When Wet.

How much are tickets? Well, they are a bit pricey, I won’t lie. Tickets start at $713 per person, but it’s definitely worth it, especially if you get to meet Mr. Bon Jovi himself. It’s like the price of a concert, but this time you can look out your window and have the sea on your left and Bon Jovi on your right.

Can you image just sitting on the pool deck and then seeing him just walking around with his towel in hand and then sitting down next to you to tan? Yeah, I’m in. Dream. Come. True.