You know the ladies on “The View” had something to say about Donald Trump’s presidential win.

“A lot of people didn’t see this coming,” Whoopi Goldberg started. “It’s been called the most shocking upset in the history of presidential politics.”

Goldberg then opened the floor for the other hosts at the roundtable to discuss their feelings on the matter.

“We were on Lifetime last night, and I was slowly getting drunk. That’s what happened to me,” Joy Behar joked. She then took a more serious tone: “It was a rough night. It was a rough night for everybody. We’re worried. The people are worried. Okay, he’s the president. Now what? We’re watching you, OK?”

The audience cheered in response as Behar revealed that the scariest thing for her about this election is that “the only checks and balances that we have are us. ‘The View,’ that’s it!”

Jedediah Bila mentioned the division within the Republican party.

“I have always said, ‘How does John McCain and Rand Paul wind up in the same party?’ They disagree fundamentally about the issues,” Bila said. “Hillary Clinton was far more hawkish in her speech than Donald Trump was.”

Bila continued, “Just because something says ‘Republican’ doesn’t mean there is a consensus on issues.”

Sarah Haines revealed that the scariest part of the election for her was that she doesn’t share the same viewpoints that she thought she did before the election started.

RELATED: “Live! with Kelly” picked the perfect day to have Megyn Kelly serve as the guest co-host

“My heart is beating so fast. I am a little nervous to speak today. I honestly didn’t think that I would be sitting on this side of it this morning,” Candace Cameron Bure chimed in. “I didn’t think that Donald was going to win. And I can’t say that I am upset about it. I know that over half of America are happy that he is there. And yet, I am in this room with a lot of people that don’t seem to be happy about it. Although there are so many things, the way that he has spoken and talked about people that I absolutely do not agree with, I was a person that voted on policy, so in that sense, I was happy with the result.”

Cameron Bure continued, “[And] yet, if anything, I hope that no matter which side you were on, it brings all of us as a people to a horizontal posture. That it brings us to our knees, our face to the floor, that we pray for our country. That we pray for him, whether you think he could turn this upside down or you [are] praying that he will uphold the positions that he said he would. I pray we come together for that in humility because God says ‘when we humble ourselves-‘”

“God says a lot of stuff, and I like God a lot,” Goldberg chimed in. “But I have to say that given the bigger picture about what Donald Trump represents, it is not so comfortable for me. Because not only does he now threaten how things are going to be done with kids of color, for women’s rights, for my right to decide what is right for my body,” she said. “This is bigger than him. This ripples out […] it affects gay people, gay marriage, transgender. This has huge effects.”

RELATED: Once the election was over, Ellen DeGeneres shared an inspiring message about what makes America great

“I do believe that God is sovereign and can use the most unlikely and unimaginable people to change things,” Cameron Bure said. “If this four years doesn’t go the way that the American people hope for who voted him in, then I pray that it is a kick in the pants [and] that we find a candidate that comes together for a more common ground for all of us.”

Goldberg appreciated Cameron Bure’s opinion but asked what those who do not have a relationship with God like Cameron Bure’s should do in this situation.

“I think they wait to see what he does,” Bila answered. “My concern with him is that we really don’t know what he’s going to do.”

Behar, Goldberg and Bila debated Trump’s wishy-washy nature on the issues before Goldberg shut it down.

“He’s not going to do anything he says,” Behar scoffed.

“Well, if he doesn’t, then we can kick his ass out,” Goldberg stated. “There is such a thing called ‘impeachment.'” 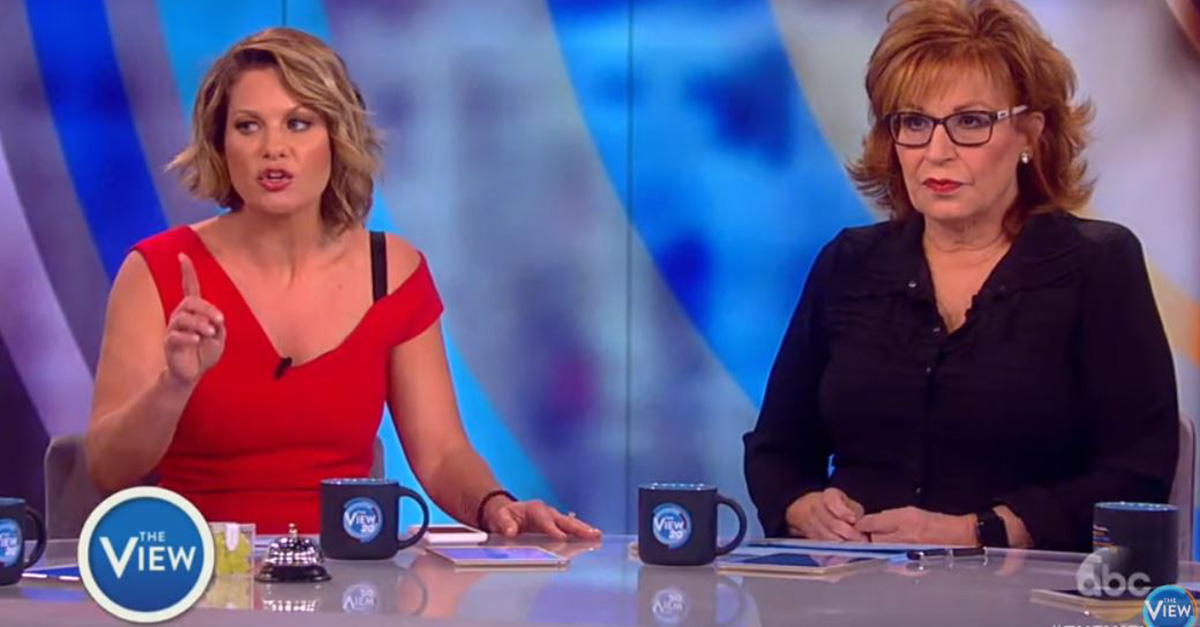