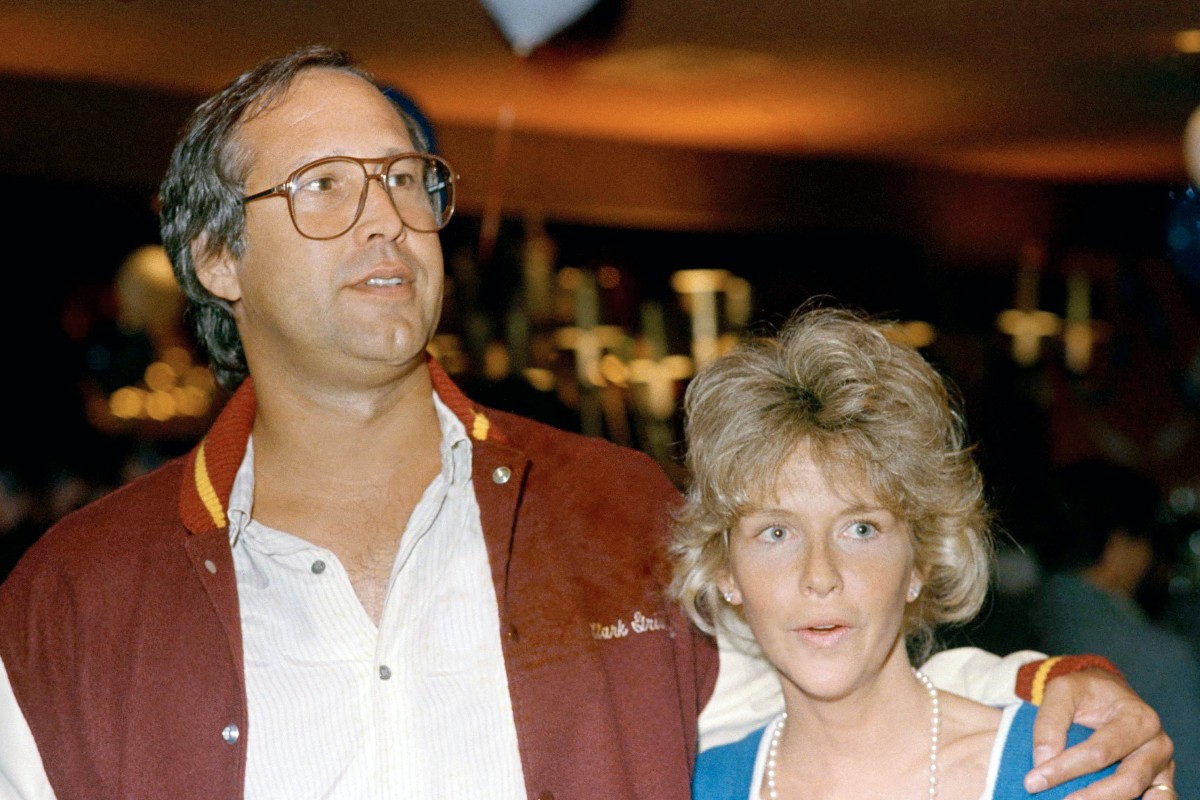 For so many Hollywood marriages, the adage holds true: Three times really is the charm. Among the many celebs who have found lasting love on their third go are Kate Winslet, Eva Longoria, Harrison Ford, Paul McCartney … the list goes on. The list of three-times-the-charmers includes the famous funnyman, Chevy Chase, who was married twice before finding his happily ever after with his current wife Jayni Chase.

But the road to finding his “one” wasn’t always easy. We take a look back at the comedian’s tumultuous history and personal life to learn more about how he finally found his way to Jayne.

Chevy Chase was born Cornelius Crane Chase in Lower Manhattan to Edward Tinsley Chase and Cathalene Parker. His father was a New York City book editor and magazine writer and his mom was a concert pianist and librettist. Chase attended the Stockbridge School prep school in Massachusetts and Riverdale Village School in New York

He briefly attended Haverford College (but was kicked out for keeping a cow in his dorm room as a prank) before getting a degree in English from Bard College. He kicked off his career as a performer in the Channel One sketch theater. The sketches shot on video and shown at the theater would later inspire his 1974 movie Groove Tube.

In 1975, Lorne Michaels hired Chase (along with fellow co-stars John Belushi and Dan Aykroyd) as an original cast member of Saturday Night Live, NBC’s late-night comedy TV show. In addition to his reoccurring role in the Weekend Update segment, Chase became known for his characters like the mumbling ?land shark” and a bumbling Gerald Ford. Chase decided to leave SNL after its fourth season, following arguments with the show’s writer, Dan Harmon.

After leaving SNL,  he continued his rise to stardom by starring in some of our most enduring comedy gems. He started with Foul Play alongside co-star Goldie Hawn, then graduated to classics like Caddyshack, Modern Problems, Spies Like Us, National Lampoon’s Vacation, National Lampoon’s Christmas Vacation, Fletch and Fletch Lives, and The Three Amigos.

After a few years of flops — like Memoirs of an Invisible Man, Cops and Robbersons, and his brief-lived The Chevy Chase Show Talk Show — Chase made a comeback as a recurring character in the Primetime Emmy Award-winning sitcom Community. Today, Chevy Chase has an estimated net worth of $50 million. Some of his most recent film projects included Hot Tub Time Machine and The Last Laugh.

Chevy Chase married Suzanne Chase (born Susan Hewitt) in 1973 — a few years before his career took off as an SNL cast member. Little is known about their marriage, and they were divorced three years later in 1976. The same year of his divorce to Suzanne, Chase moved to Los Angeles, California, and married his second wife Jacqueline Carlin. Carlin is an actress known for the movie Thank God It’s Friday and the TV series Bronk.

Again, little is known about their marriage, but we know their divorce was fairly contentious. Carlin alleged foul play, saying that Chase had threatened her with violence, and was awarded a $400,000 settlement after their 1980 divorce.

Discussing the divorce in an interview with People, Chase confessed,  ?A separation is so painful. I really didn?t have a carefree bachelor life. Mostly, I moped.? In the years that followed, he fell into drinking and substance abuse.

Finally, Chase met his third wife, Jayni Luke, in 1982. The actor met the production coordinator on the set of Under the Rainbow. When Chase originally tried to make a move, he was shot down.

“I was walking behind her one day and I said, ‘Is that your real color hair?’ and she couldn’t care less about me,” he remembered in an interview with PBS. Luke added, “He did have to pursue me because I really wasn’t wanting to be in a relationship.” Chase’s efforts paid off, and the two started dating. And under Luke’s influence, Chase cleaned up his act.

“She got me right out of the doldrums I?d been in for three years,? he told People. Under her ?very straight? influence ?there [was] no smoking of pot, no drugs, no drinking.”

The couple was married in 1982.  Luke became step-mom to Bryan Perkins, Chase’s son from a previous relationship. Over the course of their nearly four decades of marriage, they went on to welcome three daughters of their own: Cydney Cathalene Chase, Caley Leigh Chase, and Emily Evelyn Chase.

Parenthood has made Chase into a new man. In addition to leaving behind drugs (though he was treated for prescription painkiller addiction in 1986) and booze, Chase stopped taking roles in romantic films. ?Once I got married and had kids, I moved away from romantic roles because it seemed wrong to have my [daughters] wondering why Daddy was kissing someone else,? he once told a reporter.

Watch: John Belushi Was Originally Set to Star in ?The Three Amigos?