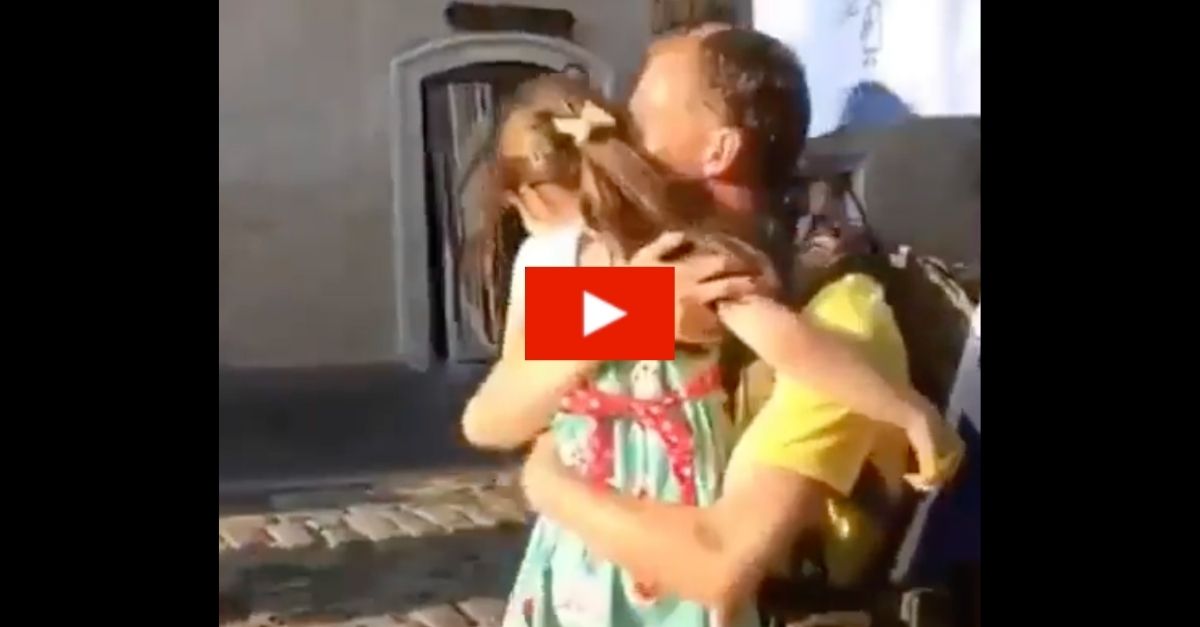 I was very fortunate to grow up with a great family. My mom and dad were probably the best parents (in my opinion obviously, I’m sure many others would get to say the same), and I also have a great relationship with my younger brother. One of the things that makes our family relationships strong is the lengths we will go for each other to help each other out. And the lengths this father goes for his daughter reminds me of that.

Major Chris Brannigan is an army major based in Tidworth Barracks in Wiltshire in Scotland. His eight-year-old daughter Hasti has a rare genetic disease called Cornelia de Lange Syndrome (CdLS) that causes seizures and severe anxiety and also has no cure or treatment. So Chris did the next best thing he could do to help his daughter: he decided to walk a 700 mile journey barefoot to raise money and awareness for children suffering from rare genetic disorders.

With the goal of raising money for gene therapy treatment for the rare genetic condition in mind, Chris walked from the city of Lauder and Edinburgh for his little girl. Starting the journey on July 6 in Lands End, he finally reached the end of his journey at Edinburgh Castle on August 12.

“It’s a tough challenge but I’m doing this for my little girl, to give her hope for the future,” he said, “Every painful step barefoot and every donation, no matter how small, hopefully means we are a step closer to funding research into treatments.”

The barefoot soldier described how walking in the heat in the middle of the summer wasn’t ideal, “It’s really, really hot. My feet are really bad. They are incredibly painful and it’s a bit like walking on glass,” he said. His walk was for the Hope for Hasti campaign, a fundraiser to raise money to help his daughter and more.

I’ve been struggling to articulate what this feels like. Knowing I no longer have to wake up sweating, in pain, knowing the days will be long and only more painful. Knowing that we have raised £336k from this campaign alone, when we only ever imagined we could make £50k. Knowing that we have achieved the overall £400k that we have been struggling for 8 long months to get, ever since finding out the cost gene therapy treatment – a possibility that we only could have dreamed for when Hasti was diagnosed. Knowing that me and my family are so supported and loved by so many kind, generous, amazing people. Knowing that the future looks that little bit brighter for us and that hope has turned into a real chance for my girl and all others with CdLS. Knowing that I have done all that I possibly could for my little girl. My baby. What possible words can sum up this wealth of knowledge? I am beyond grateful to all who have made this campaign the success that it has been. You all hold a place in my heart, and it is so full right now. Thank you. 👉 www.justgiving.com/fundraising/BarefootAcrossBritain 👉https://petition.parliament.uk/petitions/330174 #hopeforhasti #barefootsoldier #CdLSawareness #barefootacrossbritain #thisisbelonging

He wrote in the fundraiser description, “The aim of the charity is to fund the research and development of a ground breaking gene therapy treatment for children suffering from this terrible disease. The total cost is £400,000. We are running out of time to raise the money as mental decline will start at puberty, and that is not far away for Hasti.”

“From Monday 06 July, I’ll be walking the 700 miles from Land’s End to Edinburgh . I’ll be doing it while carrying 25kgs of kit on my back with everything I need to keep going, including my trusty one-man tent which I’ll be sleeping in to keep costs down. I will be wearing full combat kit including a body armour which will be heavy and hot. I will however be missing one element of my clothing …. my boots! I will do the 700 mile March BAREFOOT!”

“I know it’s madness and, if I’m honest, I’m terrified of failing. It is going to be painful and I already have a knee injury, but I am a dad and I have to fight for my little girl Hasti and all the other forgotten children with rare disease.”