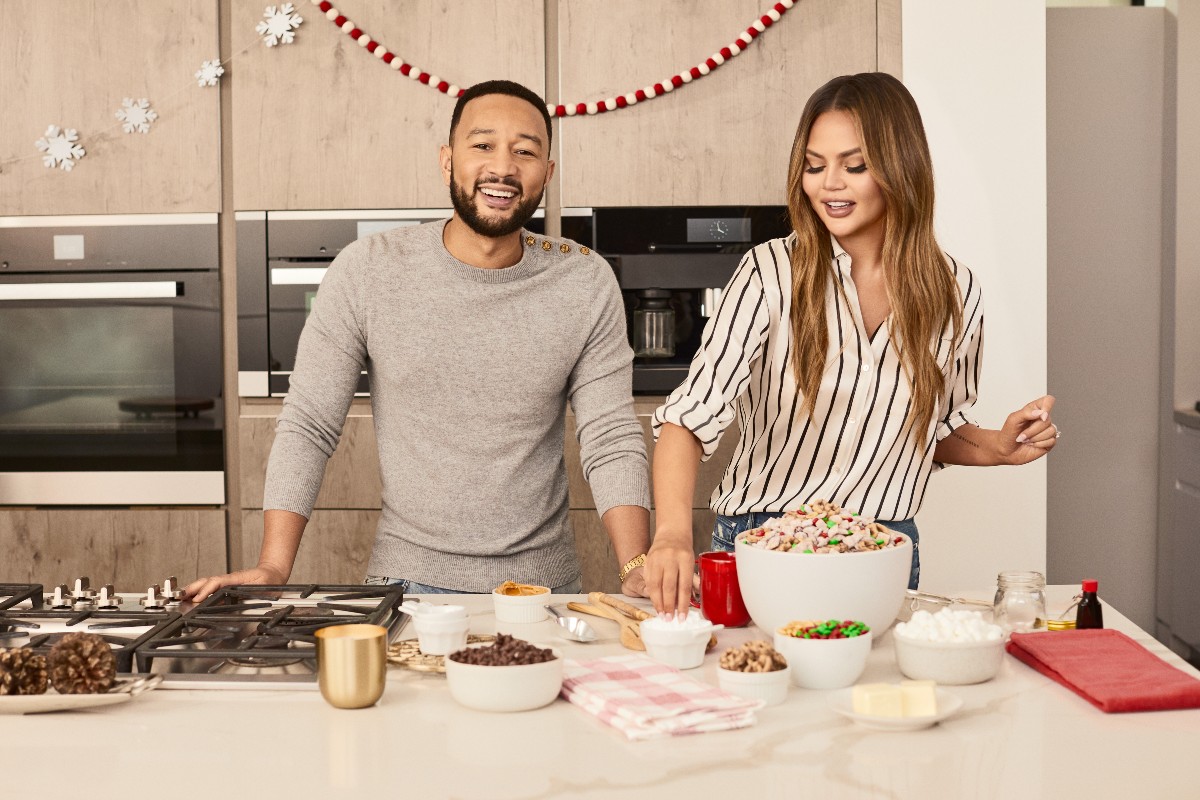 Playful, supportive, and talented, Chrissy Teigen and her husband John Legend have a story straight out of a Hollywood fairytale. The power couple has been together for more than 13 years and married for more than seven. “We have two babies and some pups and a life I am grateful to have,” the former supermodel wrote in an Instagram post on the 12-year anniversary of their meeting. “My everything, I love you and am so proud of the story we’ve created.” To hear the story of Teigen and Legend’s totally enviable romance, read on.

Chrissy met John for the first time while filming a music video for Legend’s song, “Stereo”. In the video, Teigen portrayed Teigen’s love interest. After filming, Teigen went back to John’s hotel room where the two ate In-N-Out burgers and “hooked up“. “We did the music video, we were together for like 12 hours,” Teigen remembered in an interview with Wendy Williams. The model stated they spend the entire day together, him in a full suit and her in her, uh, underwear! She remembered, ” I went to go say goodbye to him, to his hotel and we didn’t ever say goodbye that night.”

But despite sharing a magical evening together, the couple wasn’t quite ready to put labels on their relationship. While Legend was on tour to promote his latest album “Once Again”, the couple’s interactions were limited to phone calls and text messages. “I let him be himself for a while,” Teigen said in an interview with Cosmopolitan. “The worst thing you can do is try to lock someone like that down early on, then have them think, ‘There’s so much more out there.’ I played it cool for a long time. Never once did I ask, ‘What are we?'”

For Legend, this was when he fell in love with his future wife. He stated the couple was texting a lot and he began to see her sense of humor. The couple reportedly spoke so much on the phone that he fell in love with how witty, engaging, and funny she was. SWOON! “We were texting a lot, and I started to see her sense of humor,” he said in an interview with ET.

A Ring to Remember

The celebs broke up briefly while Legend was on tour. “Early on in the relationship, I was on tour with him and he’d gotten sick,” Teigen told Cosmo. “He was feeling really bummed and stressed out. He was like, ‘I can’t be in a relationship right now.'” “I was just like: ‘I’d just be happier single right now,'” Legend remembered in an interview with The Guardian. “And she was like: ‘No.'” Happily, the breakup didn’t last 24 hours. “I always joke, ‘Remember when you tried to break up with me?’” Teigen recalled. “He’s like, ‘Yes, sorry. Big mistake.’”

In 2011, John popped the question to Chrissy during a Christmas trip to the Maldives. But the plan didn’t go as smoothly as the Grammy-winning musician hoped. “I remember we got into a very big fight in the car on the way to the airport because we had opened our presents beforehand, and he had only gotten me a cookbook and a Crock-Pot,” Teigen remembered in an episode of FABLife.

At the airport, TSA agents almost ruined the surprise. As Legend explained during his appearance on Oprah’s Next Chapter, “[The engagement ring] was in my carry-on bag going through airport security, and security wanted to look through my bag and they wanted to look in that particular box.” He continued, “Chrissy was standing right next to me and I was, like, ‘Oh, my God. I’ve hid it so well this whole time. Now as we’re just about to get to the Maldives she’s going to find out I have a ring in this box and it’s going to ruin the surprise and I’ll have to get on my knees in the airport.’”

But Teigen didn’t spot the ring, and Legend was able to propose during a romantic dinner as he’d planned.

To celebrate their engagement, Legend wrote a song for his bride-to-be: “All of Me”. The music video was filmed in Lake Como in Italy and included footage from their real-life wedding. The ceremony was held in Lake Como, though the couple was legally married in New York City. “We are dumb and didn’t realize that our Italian wedding would not be recognized unless we had a real ceremony in New York City, Teigen explained in an interview with E! News. “So Irina Shayk was our witness—the most beautiful woman on earth!”

Despite fertility challenges, Teigen revealed on social media that the couple was expecting their first child in 2015. The couple had conceived using IVF.

“John and I are so happy to announce that we are pregnant :),” she posted on Instagram. “As many of you know, we’ve been trying to have a baby for a while now. It hasn’t been easy, but we kept trying because we can’t wait to bring our first child into the world and grow our family. We’re so excited that it’s finally happening. Thank you for all your love and well wishes. I look forward to all the belly touching!” And sure enough, their daughter Luna “Lulu” Simone Stephens was born a few months later on April 14, 2016.

The couple’s second child, a son named Miles Theodore, was also conceived through IVF. Teigen announced the birth of her baby boy on Twitter on May 17, 2018. Three days later, Teigen posted Instagram pics of the newborn and shared his name with the world. In 2018, Legend became the youngest person and only Black man to ever win an Emmy, Grammy, Oscar, and Tony (EGOT). Again, Teigen celebrated by creating a string of heartfelt Instagram posts.

Teigen showed off her baby bump at the end of the music video for Legend’s song “Wild.” But in September 2020 Teigen was hospitalized for excessive bleeding that ended up being a miscarriage. The couple named their unborn son Jack. “To our Jack – I’m so sorry that the first few moments of your life were met with so many complications, that we couldn’t give you the home you needed to survive,” she wrote in social media. “We will always love you.”