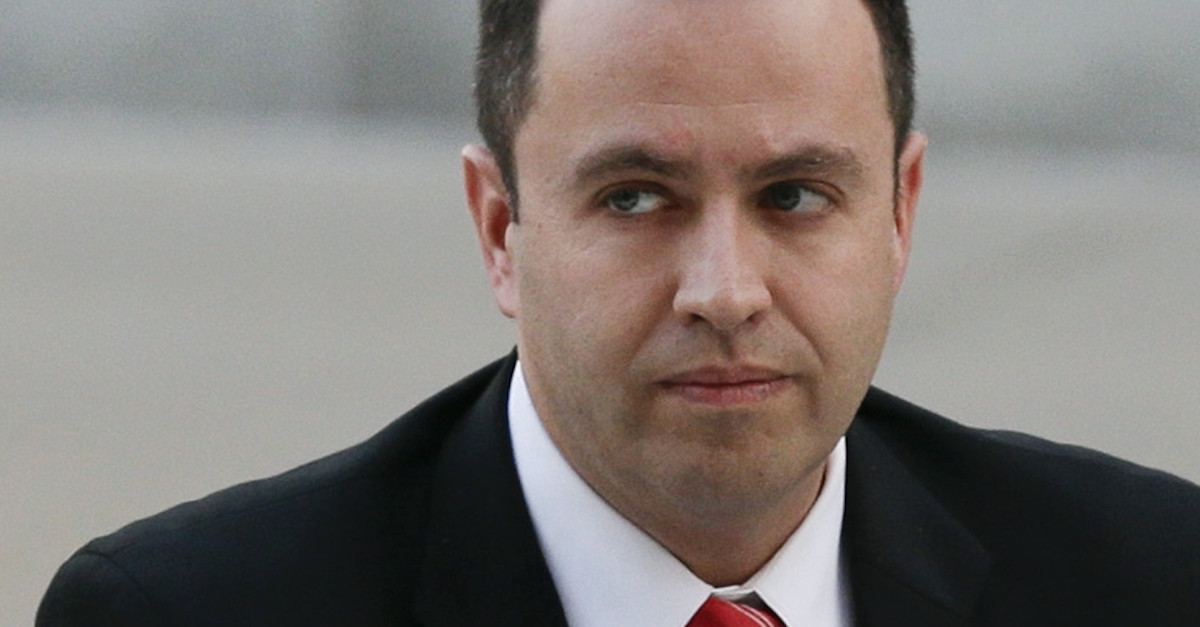 AP Photo/Michael Conroy
FILE - In this Nov. 19, 2015 file photo, former Subway pitchman Jared Fogle arrives at the federal courthouse in Indianapolis. Fogle is being sued by a girl who's one of the victims in the sex crimes case that sent him to prison for more than 15 years. The federal lawsuit filed Tuesday, March 15, 2016, names Fogle and the former head of his anti-obesity charity, Russell Taylor. It also names Taylor's wife. (AP Photo/Michael Conroy, File)

TMZ reports that Fogle — who recently filed legal documents in a bid to be granted an early release — has had his request denied by a judge.

The 40-year-old made the audacious claim that Judge Tanya Pratt had no legal authority to hear his child pornography case because he was wrongfully charged with conspiracy.

?The court failed to address the Notation of ?conspiracy? and the contention of such,? Fogle wrote, according to documents obtained by Radar Online. ?The statute ? clearly offers no provision for charging a party with ?conspiracy.’?

Fogle also disputed the charges of ?four counts of travel in foreign commerce for the purpose of engaging in illicit sexual conduct with a minor,? claiming that he didn’t travel out of the state to engage in unlawful sexual contact with a child.

?The Motion, Notices and Objection are all DENIED ? ? Judge Pratt replied, adding that Fogle’s claims were “frivolous.”

Fogle was sentenced to prison for 15 years after it was discovered that he engaged in sex acts with minors and was in possession of child pornography. In addition to the $50,000, Fogle also paid $1 million in restitution in 2015 to 10 of his 14 victims.

Fogle?s ex-wife, Kathleen McLaughlin, alleged in a lawsuit that Subway was aware of Fogle?s pedophilia long before it became public knowledge, yet decided to work with him anyway. Subway is currently fighting to have the charges dismissed.

Details of Fogle?s crimes first came to light in August 2015. Since that time, there has certainly been no limit to the disturbing nature of his actions.

Is Jared partly to blame for Subway’s recent struggles?

According to Business Insider, the restaurant chain is having a difficult time living up to its title of world?s largest restaurant chain. With new restaurants popping up daily to offer customers increasingly healthy options, the competition is stiff.

Numbers provided by a representative show that the popular chain has lost 909 (3 percent) of its locations over the years. There are 25,835 active chains in the US, down from 26, 744 at the end of 2016, according to numbers provided by the company.

Three Subway franchisees told Business Insider that the wave of closures may only be just only just beginning. One of those franchisees estimated that according to sales numbers, up to one-third of Subway?s locations might be losing money.

Last week, news broke that over 400 franchisees signed a petition against the corporation in protest of the company?s decision to bring back the ?$5 Footlong? deal beginning in January. Although it is slated to be a temporary deal, franchise owners aren’t happy to take a hit on their already reduced profit margins, reported the New York Post.