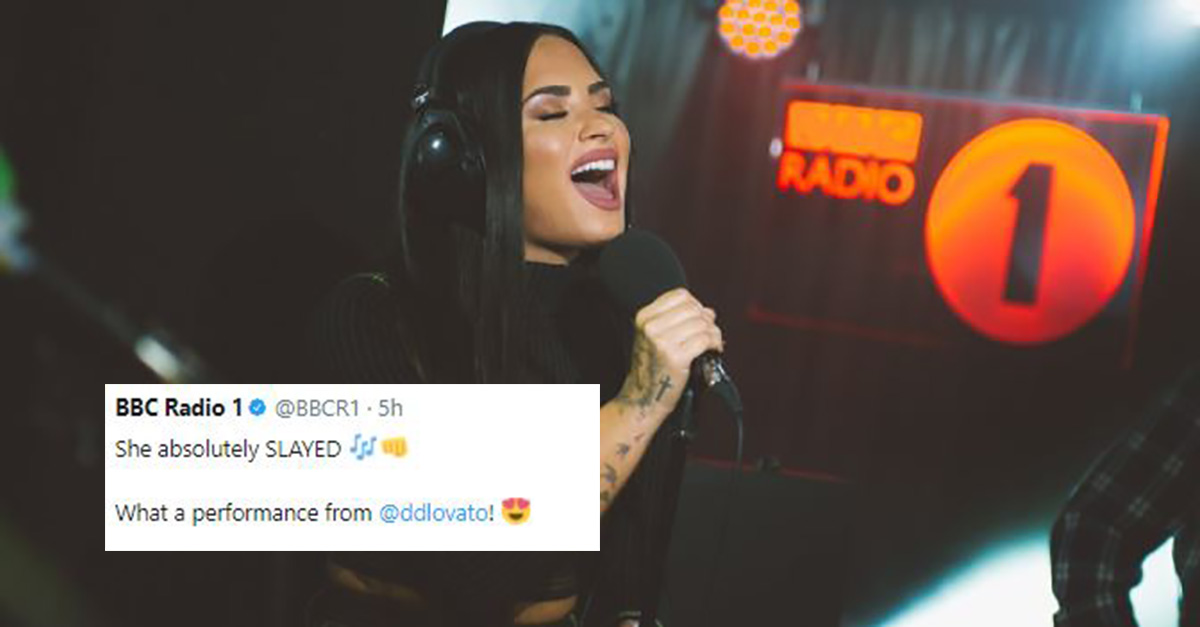 In a dazzling performance on BBC Radio 1 Live Lounge, Demi Lovato blew off the figurative roof. The 25-year-old at the time superstar joined British radio DJ Clara Amfo in the Live Lounge for an acoustic session where she slayed some of her greatest hits. Backed by only a small band and a couple of background singers, she treated viewers to songs including a slow-tempo version of summer hit “Sorry Not Sorry” and a soulful rendition of throwback classic “Skyscraper.”

🎧 @ddlovato talking that talk is THE BEST way to start the week!

Understandably, her fans were wowed by the vocal ability Lovato showed off and she was trending at the time. One user tweeted, “@ddlovato you are slaying!! I can’t cope @BBCR1.”

Twitter user Alexandra (@Alexand04701076) credited “Skyscraper” for helping her through a tough time. She tweeted, “@ddlovato that song has helped me through some dark days!!! Thank you for being the raw and beautiful artist that you are!!! Can’t wait to see you on tour!!!”

@ddlovato that song has helped me through some dark days!!! Thank you for being the raw and beautiful artist that you are!!! Can’t wait to see you on tour!!!

Even singer Sam Smith joined in the praise when she belted a Sam Smith cover of his ballad, “Too Good At Goodbyes.”

The emotional performance that Lovato gave of her songs were definitely a nod to her meaningfulness of her new album. In an interview with Billboard Magazine ahead of the Sept. 29 release of her sixth studio album “Tell Me You Love Me,” Lovato revealed that album shared a close relationship with the events documented in her YouTube documentary, “Simply Complicated.”

She told Billboard that the documentary, which followed Lovato as she recorded her album during the difficult times of dealing with substance abuse issues, an eating disorder, rehab, and the end of her six-year relationship with actor Wilmer Valderrama, was an opportunity for her to share her narrative and positivity with fans.

Lovato’s past has definitely made a difference in the sound of her music, and it’s no surprising that her willingness to be open has fans reveling in it. “I think that’s what makes me a role model for people is that I’m not perfect,” she said. “It’s that I’m honest about where I am, but I think for so long I’ve been such a strong advocate for the things I believe in, and certain things I still struggle with.”

What a performance from @ddlovato! 😍

Editor’s note: This article was originally published on November 13, 2017.

Watch: A ‘Grease’ Sing-A-Long is Coming This Summer, Get Those Dance Moves Ready!