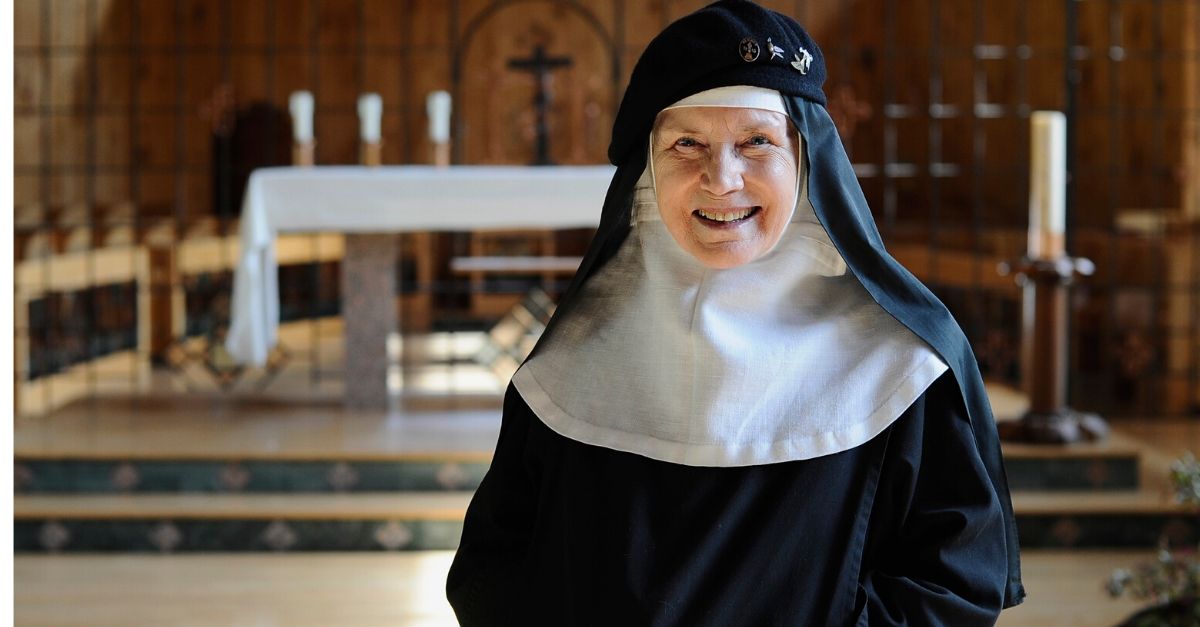 This led to Dolores being raised in Chicago by her grandparents. There she went to a private, catholic school. The actress-turned-sister later would later explain that the school was chosen for it’s proximity to where they lived, and thus was safest for her to travel to. By the age of 10, she converted to Catholicism. At the same time, however, she fell in love with the idea of acting. When she wasn’t in school, she would accompany her grandfather to the movie theatre, where he worked as a projectionist. As she sat in the projection booth with him, she began to dream of being on the silver screen.

Elvis with 19-year-old Dolores Hart on the set of Loving You in 1957. Dolores also played in the movie King Creole the next year. She later gave up her acting career to become a nun. She turns 80 later this year. #elvis #elvispresley #doloreshart #elvismovies #elvis1957

She made the films she watched her teachers, and later, when she moved to Los Angeles to live with her mother, she landed a lead role in a school production. She was accepted into Marymount College and started working shortly. Her first leading lady role was aside none other than the King of Rock and Roll himself, Elvis Presley. The 1957 release, Loving You with Elvis Presley, helped launched Hart’s career full throttle.

She also completed Wild is the Wind and Lonelyhearts before they worked together again the following year in King Creole. In 1959, Hart won a Theatre World Award and was nominated for a Tony Award for Best Featured Actress for her debut role on Broadway in The Pleasure of His Company. In the 1960s she continued building her career, starring in a spring break flick called Where the Boys Are,  Francis of Assisi, the Inspector, based on a novel by Jan De Hartog. The Virginian in 1973 and Come Fly With Me, in which she played opposite Hugh O’Brian, was her last role before she took a one-way car ride out of the city to her new life.

While filming the role of Clare in Francis of Assisi on location in Rome, Hart shared an encounter with Pope John XXIII. When she introduced herself as, “I am Dolores Hart, the actress playing Clare.” He replied with, “Tu sei Chiara!” (“No, you are Clare!”). Maybe this influenced her decision to become a nun. Perhaps it was having a priest for a best friend, his name was Father Doody. Perhaps it was all the visits to the Connecticut convent Regina Laudis Abbey for peace and confessions. Regardless, Dolores Hart, at 24 years young, left Hollywood and her fiance, Don Robinson, to became Sister Judith, later Sister Dolores.

She devoted her life to her work indefinitely and also helped expand the Abbey of Regina Laudis and started an arts program. Every summer, the program puts on plays for the Bethlehem community. Fiddler on the Roof, West Side Story, My Fair Lady and, The Music Man are a few of the shows they have performed. Recently, Hart was named prioress of the monastery in 2001.  But she is not inactive from the film industry entirely. Sister Dolores remains a member of the Academy of Motion Picture Arts and Sciences. She is also the sole nun to be an Oscar- voting member.

The transformation from being Dolores Hart’s to becoming Sister Dolores was unpredictable yet, admirable. “God Is the Bigger Elvis” was released about her journey on HBO in 2012. The former actress also penned the story in her own words. Her autobiography, “The Ear of the Heart: An Actress’ Journey From Hollywood to Holy Vows”, was released in 2013.