Remember Dorie Miller? Cuba Gooding Jr. Did Well, But Dorie Is So Much More Than ‘Pearl Harbor’ 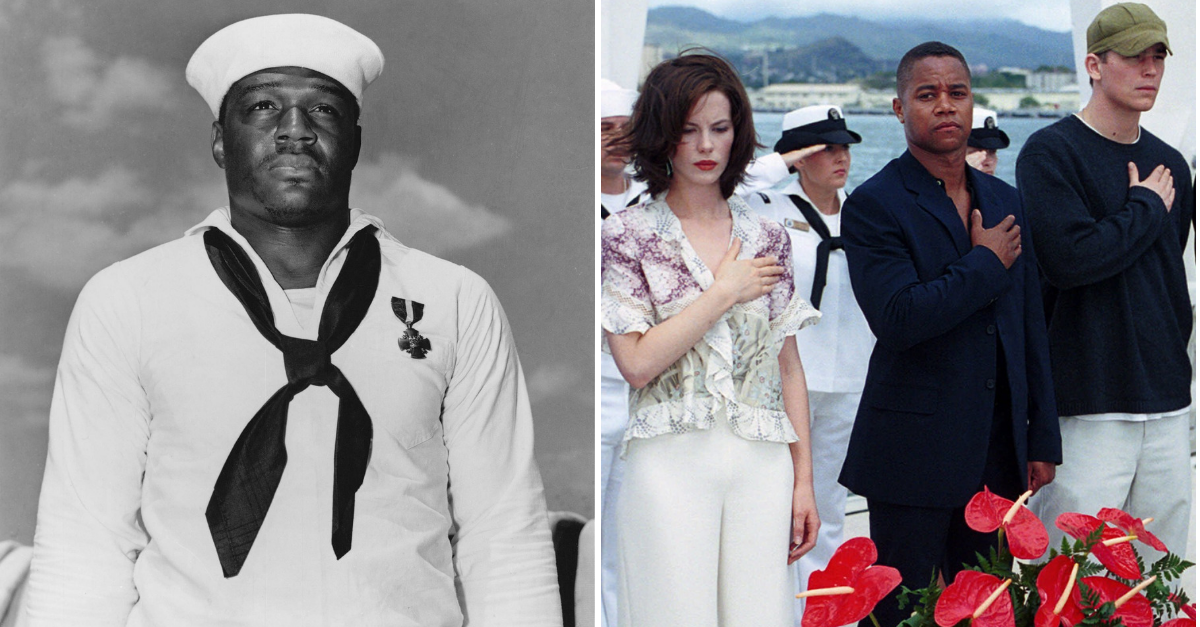 Here in Texas, the Lone Star State, we?re known for a plethora of things. BBQ, of course. A sense of state pride that makes us forget we aren’t our own country, quotes about our greatness (?Everything’s bigger in Texas? and ?Go big or go home?) and the horses that we definitely do not ride to school ever at all, and still get asked about. Many native Texans have made an impact on the world and earned a spot for themselves in history. Some of these historic figures are known by name. Some go unmentioned, or worse, are known only as the character played by Cuba Gooding, Jr. If you’ve seen Pearl Harbor or know military history well, you’ve seen or heard of Dorie Miller. Here’s what you probably didn’t know about this native Texas son.

Doris “Dorie” Miller was a United States naval serviceman awarded the Navy Cross for his acts of bravery during the Japanese attack on Pearl Harbor during World War II. The Navy Cross is the second-highest honor that US Navy sailors may receive, with the Congressional Medal of Honor being the first. Dorie was the first African American individual to receive it, making a name for himself, Texans, and other African American sailors that would come after him.

Doris Miller was the son of Henrietta and Conery Miller. He lived in Waco, Texas and was the third of four boys. His pre-Navy life saw him playing fullback on the A.J. Moore High School football team and working on his father’s farm. He joined the U.S. Navy in 1939, at the age of 20, to both earn money for his family and to fulfill his desire to see and travel the world. He was fist assigned to the USS PYRO, an ammunition ship based in Virginia. Early in 1940, he was transferred to a large battleship, the USS West Virginia, where he made a name for himself as the heavyweight boxing champion on a ship housing 2,000 men. At 200 pounds and 6′ 3″, he claimed the title graciously.

Despite his size and proclivity for physical strength, Dorie was only allowed to perform service roles on board, as the US Navy held laws at the time preventing African American sailors from participating in combat. Miller, however, completed his job as the ship’s mess attendant without complaint. In late 1940, the USS West Virginia joined the Pacific Fleet and Dorie Miller found himself on the way to Pearl Harbor, Hawaii.

On the day of the attack, December 7, 1941, Dorie was following his schedule per usual. He arose at 6, and started breakfast for the ship’s officers. He was below decks doing laundry as it was nearing 8 o’clock when general quarters sounded. He rushed to his assigned battle-station; an anti-aircraft battery magazine only to find it had been damaged by a Japanese torpedo. He then started carrying wounded soldiers away from the main deck to safety, while bombs and bullets rained. After he rescued many crew members, he was ordered to evacuate the wounded Captain Mervyn Bennion. The captain refused to abandon ship and later died onboard from his injuries.

Doris Miller’s actions that followed weren’t only an act of extraordinary courage that changed his trajectory in the military, but what would come to define him. Ignoring the law forbidding him to use machinery and participate in combat, Miller started firing a .50 caliber browning anti-aircraft machine gun at the Japanese aircraft until he ran out of ammunition. Although he’d received some weaponry training on the USS Nevada, he was never trained on that particular weapon and so when he touched the gun, it was his first time. One account quotes Dorie saying that he was shooting the anti-aircraft gun for about fifteen minutes. He simply recalled what he had seen his counterparts do, and followed his intuition.

After the attack, Dorie was allowed to return home for a short amount of time and work as a recruiter. Two years later, in 1943 he was promoted to petty officer, ships cook third class and was assigned to the USS Liscome Bay, an escort carrier. That November, a Japanese submarine struck the Liscome Bay and the ship sunk, with Miller and the other crew aboard.

Doris Miller was recognized as one of the first heroes of World War II. His accolades include being commended in a letter signed by Secretary of the Navy Frank Knox; the Doris Miller Park, dedicated to him in his hometown of Waco, Texas; and the Doris Miller Family YMCA. These memorials, while seemingly small, keep him alive in spirit. He was a true hero, so much more than just a ship’s cook. Miller never stopped going above and beyond the call of duty of the United States Navy, in service of a country that should recall his name.