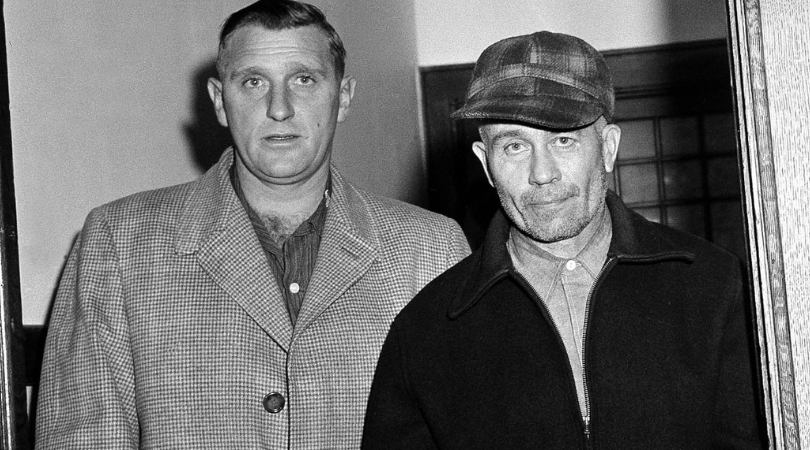 Edward Theodore Gein was a famous serial killer born on August 27, 1906. He was born in La Crosse County, Wisconsin but shortly into his childhood, his family moved to Plainfield, Wisconsin. His childhood was far from peaceful. For starters, his father, George Gein, was an alcoholic whom his mother, Augusta loathed. He was also the reason the family moved to a very isolated area in the city. The family of four, rounded out by Ed’s brother, Henry, lived in tension.

Augusta was a very pious woman of Lutheran faith. She made sure her sons would not do any wrong. She told them not to drink, that the world was wicked, and that women (aside from herself) were evil. She detested sex. The boys were only allowed to go to school and come back. The rest of the time was spent on the farm. As a child, Edward was shy but excelled in some of his studies. Reports from classmates and teachers said that he was a little odd- like laughing randomly when nothing was funny “odd”. In addition, his mother did not encourage his friend making.

Tragedy began in 1940 when Ed’s father died of alcoholism. Four short years later, Ed’s brother Henry died mysteriously. The two had been burning marsh and the fire had to be put out by fire officials. However, by the end of it all, Henry was missing. Ed reported him missing at the end of the night. His body was not burned, but there were some bruises on his head. The police determined the death an accident, by asphyxiation. However, no autopsy was done. Some think that it was just too “mysterious” and that Edward actually killed his brother. The next year, his mother died from a stroke. Ed stayed on the family farm, alone. And that’s where his story gets…gross.

On November 16, 1957, a Plainfield woman disappeared. Bernice Worden was the hardware store owner, and it was obvious when the store didn’t open that day in the small town. Worden’s son was the Deputy Sheriff. He found a sales slip for antifreeze linking Gein as the only person seen in the store that day and there was blood on the floor, as well as an empty cash register. When the police made it to Gein’s farm they found Bernice Worden’s body decapitated and hung upside down, like an animal. A swift tour of the property found whole body parts and bones, human skin stretched over seats, skulls framing Gein’s bed, Mary Hogan (a previously missing woman he’d killed), bowls from human skulls, human skulls in boxes, a belt made from nipples, multiple noses, female fingernails, Worden’s heart in a plastic bag, Hogans face in a bag, and Worden’s head in a sack.

Gein confessed to snatching human bodies from graves for years, between 1947 and 1952. He claimed that he would “come to” a dazed state and find himself in the graveyards. On occasion, he left without exhuming recently buried bodies. But for most of his 40+ visits, he was digging up women that reminded him of his mother, Augusta. What was he doing with these female bodies, you ask? Well, Gein was making a “woman suit”. It was essentially an attempt to rebuild his mother. He often wore this “woman suit” to just chill and dance around his house…but also to dig up bodies. When cops didn’t believe him about the grave robbing, he had to show them.

Needless to say, Gein was arrested. Shortly after he was diagnosed with schizophrenia and deemed unfit for trial. In county court, he pleaded not guilty by reason of insanity. Reasonable? He was sent to the Mendota Mental Health Institute (Mendota State hospital) in Madison, Wisconsin. He died in the maximum-security hospital.

Given the proclivity our country has for the truly wild, the story of Gein has inspired countless art. A band was named after him. I don’t know their genre, and I’m afraid to Google it. More well known, is the Alfred Hitchcock movie Psycho based on the fictionalized version of Gein’s story by Robert Bloch. A horror film Ed Gein: The butcher of Plainfield was released in 2007. Buffalo Bill of The Silence of the Lambs and Leatherface from The Texas Chainsaw Massacre were both loosely based on him. As was the third season character Dr. Oliver Thredson from American Horror Story: Asylum. Talk about crazy, am I right?