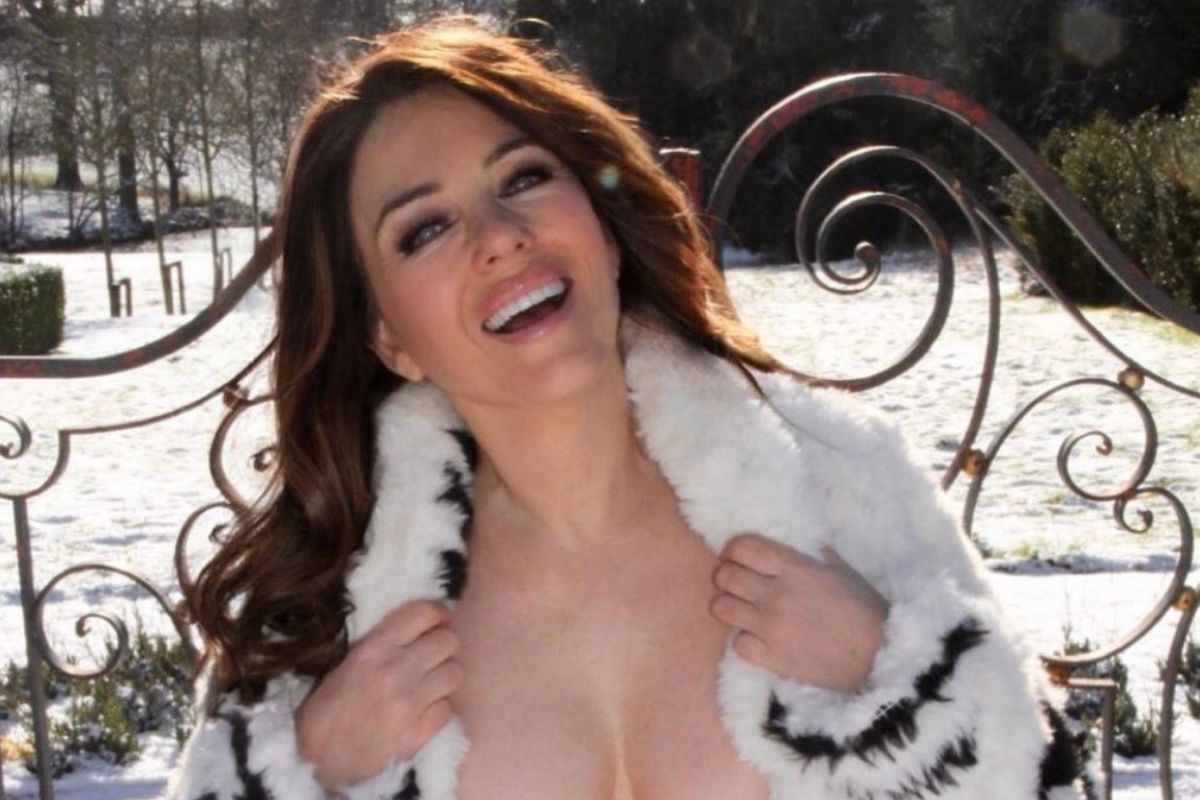 Holy moly, don’t we all wish we could look like this at the age of 55? Turns out Elizabeth Hurley didn’t let the cold weather stop her from enjoying a, let’s say top bikini moment. Hurley went on Twitter to post topless photos outside in the snow wearing only a white and black coat and a white bikini bottom from her successful swimsuit line, Elizabeth Hurley Beach. She captioned the photo, ?How could I resist?? in which she sent her followers into quite a frenzy as she flaunted her perfectly toned abs.

Several comments were saying that the actress wasn’t human, others saying she was gorgeous and stunning. Others stated she has all the right to flaunt her body. According to Women’s Health, Hurley keeps her abs and shape by making more time for exercise, taking the time to do relaxing activities, and eating nutritious foods.

Far be it for me to suggest the tabloids get their facts muddled, but these pics were in fact taken by my 80 year old mother. Not entirely sure if that puts minds at rest or not 😘 pic.twitter.com/yKwbAlfk9i

Despite the pandemic, it hasn’t stopped the British Austin Powers actress from engaging in outdoor activity. As far as what exercise the actress does, she said one important key was to focus on stretching. She noted, “I don?t do any regulated exercise, but I?m very active. On the weekends I go for long hikes with my dogs. I try and stretch every day. I do the occasional yoga or Pilates class, but mostly it?s just self-exercise at home. I might do some stomach exercises or some bottom or arm exercises, but because I trained for a dancer when I was young, I sort of know all the exercises.”

The English Actress has been posting bikini snaps all through the COVID-19 pandemic. Back in April, shortly after the coronavirus pandemic first became known around the world, Hurley discussed what it was like to live in total isolation. The model revealed that she had been quarantining in our country home of Hertfordshire alongside eight other family members, which included her 18-year-old son Damian and her 80-year-old mother Angela. Despite the overcrowded house, she stated that she’s eager to have a new man in her life once the pandemic is over. She was interviewed for UK’s Hello Magazine back in April stating, “I?d love to fall madly in love with someone, which certainly won?t happen whilst I?m locked down with blood relatives. “Maybe when it?s over I?ll put my headlamps on full beam and make an effort.?

Elizabeth Hurley Looks Back On Her Most Memorable Outfits

As expected, social media also had their negative reactions to the steamy nude photos after several believe that it was her teenage son who took the photos. Good Morning Britain host Piers Morgan even went on to reportedly call the photos creepy and thirsty, speculating that her son had indeed been behind the lens.

Being the queen she is, Liz Hurley went on to clarify on Twitter sharing the topless photos of herself wearing the swimwear bikini bottoms again, tweeting, ?Far be it for me to suggest the tabloids get their facts muddled, but these pics were in fact taken by my 80-year-old mother. Not entirely sure if that puts minds at rest or not.?