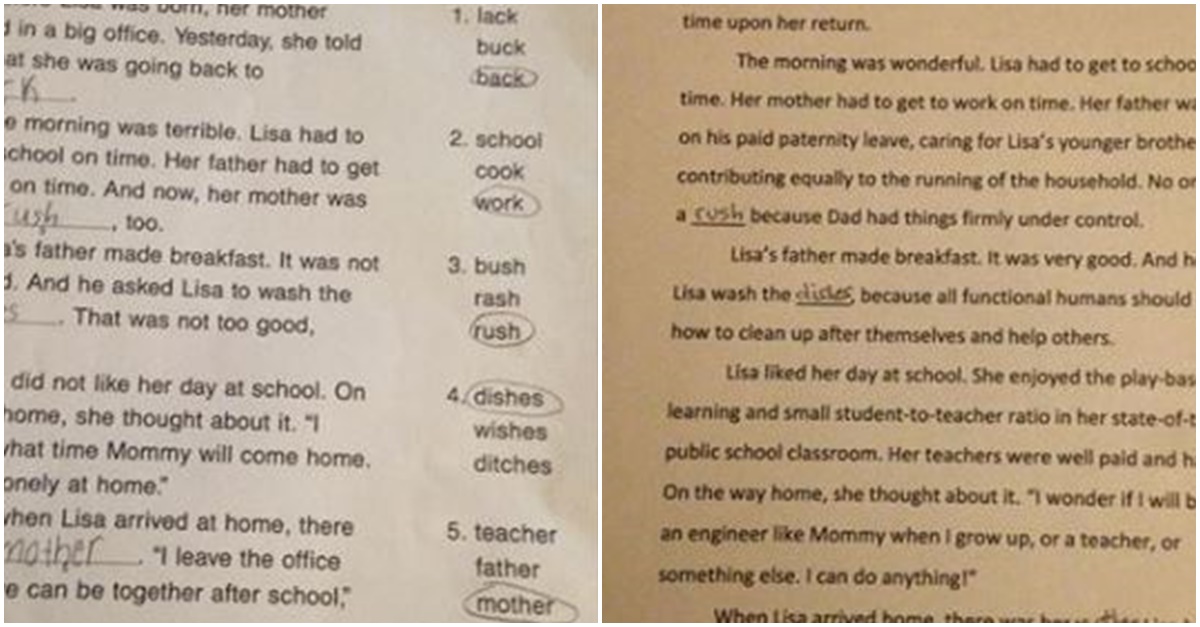 According to TODAY, Polvino was frantically working away one evening trying to prepare dinner, help her 6-year-old daughter, Hazel, with homework and answer her 4-year-old son, Jasper’s, nonstop questions.

As she was helping her daughter with her homework, she looked down at one of the assignments and “almost lost it,” according to Polvino.

The assignment prompted Hazel to fill in the blanks of a story with the correct vocabulary words, but it wasn’t the vocabulary words that upset Polvino. Her issue came with the story’s narrative, which talked about a little girl who was upset because her mother was going back to work.

RELATED: The “TODAY” moms will have you in tears after you read the emotional letters they wrote to their babies

The story, which was aptly named “Back to Work,” began with, “Lisa was not happy. Her mother was back at work.”

It continued that Lisa had a “terrible morning” because “Lisa had to get to school on time. Her father had to get to work on time. And now, her mother was in a rush, too.”

Lisa’s father also had to make breakfast, which was “not too good.” However, by the end of the story, Lisa was slightly happier because her mother was able to get off work early so she could meet her daughter at home.

Polvino, who works in children’s publishing, shared her frustration, as a working mom, with TODAY, saying, “It just pushed so many buttons for me, and with each sentence, it managed to get worse! My shock and dismay quickly turned to outrage. I mean, what decade are we in, anyway? In this day and age, we’re going to tell kids that mothers working outside the home makes their children and families unhappy? That fathers don’t normally do things like cook and wash the dishes?”

Although her daughter didn’t seem fazed by the story but was more intent on trying to pick the right vocabulary words, Polvino still worries how such a narrative will affect children whose mothers work.

RELATED: Zach and Tori Roloff had a hard time adjusting to their roles as “Mom and Dad” before welcoming Jackson

“What message was this sending to them? What message was it sending to little girls who dream of having careers and families? And what about all the other working moms ? did they feel, as I did, like they?d been punched in the gut when they read this?” Polvino asked.

Instead of just getting upset over the assignment, Polvino decided to create her own, updated version of the story to reflect how she thinks life should be and how she wants it to be for her children.

“The morning was wonderful. Lisa had to get to school on time. Her mother had to get to work on time,” Polvino wrote. “Her father was home on his paid paternity leave, caring for Lisa’s younger brother and contributing equally to the running of the household. No one was in a rush because Dad had things firmly under control.”

After posting her rewrite online, Polvino received many, many positive comments from other moms who praised her updated story. The mother-of-two also received an apology from her daughter’s teacher, who said the worksheet was “outdated.” She also thanked Polvino for bringing it to the school’s attention and informed her that worksheets in the future would be more carefully monitored.