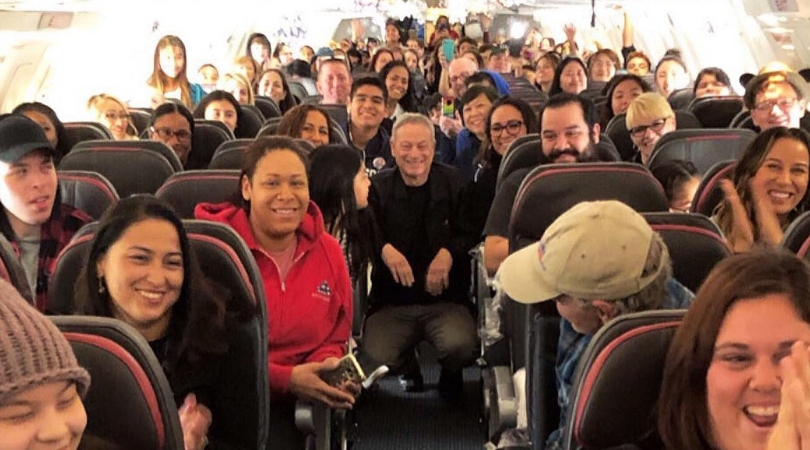 Just when you thought we couldn?t love Gary Sinise more, he pops up and does the unthinkable…again! Turns out more than 1,750 Golden Star family members were chosen to take a trip called ?The Snowball Express,? an official program of the Gary Sinise Foundation.

What does the program include? A Trip to Walt Disney World! On December 7, 2019, the actor had a total of 15 airplanes in which children and spouses of fallen soldiers were in, and were treated to an all-expenses-paid five-day vacation in Orlando, Florida! There were families from Dallas, Chicago, Nashville, and Los Angeles.

Today begins our GSF Snowball Express #14. Over 1000 Gold Star Children travel with surviving parent or guardian, over 1,750 in all, via our travel partner @AmericanAir to Disney World as part of our @GarySiniseFound Snowball Express program. pic.twitter.com/lvDfMhXXcR

Each airport had a special sendoff for the families, with people dressed in holiday attire and other festive gear, cheering and singing holiday songs. This therapeutic retreat offers a fun and inspiring program that encourage critical peer-to-peer support for these families and their loved ones.

Sinise?s stated that this annual event, this year marking number 14,  is done for children who have lost a parent in military service, either combat-related or illness, and want to make sure the children know that they aren?t forgotten. Although the Gold Star Family may be grieving, the program aims to provide a memorable experience where they can access support, make positive memories, create new bonds, and build a community with those who understand their loss.

The foundation started in 2006 from a letter that was written by a fallen soldier to his wife, only to be opened if he died in battle. He wrote that he had always wanted to take his kids to Disney. Sinise?s foundation took over the Snowball Express Program in 2017, but the actor has supported the program for years. He believes it helps families heal, learn, and build lasting relationships.

Another sponsor of the program is American Airlines, who provide the air travel, flight staff, and hundreds of team member who volunteer. According to American Airlines Customer Service Manager Nora Hilton, this was the largest turnout the airline has had in 14 years. The actor has dedicated years to causes for veterans such as volunteering or USO tours, helping people overcome loss or injury, and building homes for wounded veterans.

The annual Gary Sinise Foundation Snowball Express event at Walt Disney World Resort in Orlando, FL is right around the corner. Look back at 2018 and see your donations touch Gold Star families at the Most Magical Place on Earth. #SBEGSF #SnowballExpress https://t.co/zWPLmB0jve pic.twitter.com/hRbDWOPr0g

To celebrate the success of the program last year, the Gary Sinise Foundation gave a recap of last year’s trip showing some special tear-jerker moments. They also thanked those who donated for allowing them to continue to the program every year.