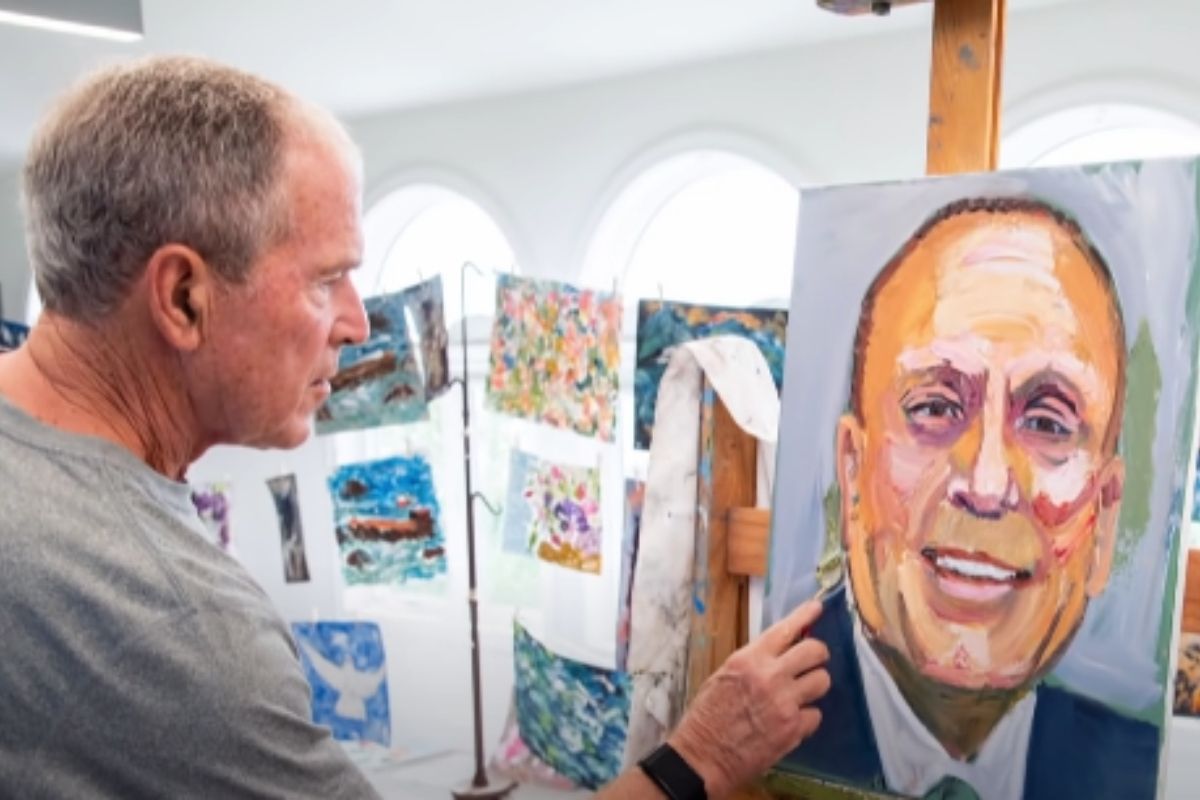 With all the ongoing issues in our nation regarding immigration policy, former President George W. Bush was called on by a friend to use his voice and platform to speak on the debate. His response was an offer of his paintings, which- fun fact about the former politician, is one of his passions. According to Fox News, he had painted 43 migrants and their stories to “change the tone” surrounding immigration, shifting the focus on its “beauty.”

The Art of Painting: A Conversation with President Bush’s Art Instructors

The Republican former president is known for his paintings, spending his leisure time honoring American warriors and military veterans in the past. In an exclusive interview with Fox News, Bush said, “It?s something I just came to, I hadn?t been painting all my life. I started painting eight years ago, and I?ve been painting ever since. I was busy, but it turns out, I wasn?t fulfilled. Exercising, golfing some, and giving speeches, and writing some other books, and by chance, someone gave me Winston Churchill?s essay, ?Painting as a Pastime.? I read it, and as a Churchill admirer, I took a keen interest in his paintings.”

George W. Bush: ?Portraits Of Courage? Is ?A Wonderful Opportunity To Honor? Veterans

He explained how Churchill’s essay, “talked about the joy of painting, and I said, maybe this is what would fill my interests,” adding, “And so I said, I?m going to paint, and I hired an instructor and got after it. I took it very seriously ? it?s the kind of thing you have to work at, and I?m working at it. I?m learning a lot.”

He also noted that he doesn’t want to get directly involved in politics, but that his friend expressed the country’s need for his, “voice in the immigration debate,” saying, “I said, ?Well, I?m not so sure I want to get involved in politics,? and he said, ?Well, why don?t you paint immigrants.’ And it was one of those moments where it was incredibly enlightening, and I thought, wow, great idea.”

Out of Many, One: Portraits of America’s Immigrants by George W. Bush on Amazon

His new book, Out of Many, One: Portraits of America’s Immigrants, had actually come out in 2020, and Bush explained to Fox News that it had little to do with the immigration system, saying, “But the purpose of this book was not to create a hot issue ? the purpose of the book was to try to change the tone of the debate and get people to focus on the beauty of immigration, not the sordid side of immigration.”

Joseph Kim, an immigrant who grew up and fled North Korea to China, and then to the United States, was the first immigrant portrait Bush painted. Kim now works for the Bush Institute at the George W. Bush Presidential Center as a resident expert in its Human freedom Initiative. He said, “I admire his story incredibly well. And then I decided, well, if that immigrant needs to be painted, how about Paula, the woman who raised us, and then I got going on it, and once it became clear that the project started taking steam, we decided to limit it to 43.”

Bush’s book details through a collection of stories and oil paintings, the “inspiring journeys of America?s immigrants and the contributions they make to the life and prosperity of our nation,” including profiles of North Korean refugees fighting for human rights, a CEO in Dallas, Texas, who came to the U.S. as a teenager from Mexico, a Nigerian woman who became an engineer, and many more who made the hard work journey in search of a better life.

George W. Bush on Painting a New Vision of Immigrants

In the book’s forward, Bush makes a reference to the Latin words, “E Pluribus Unum,” which means “Out of Many, One,” explaining how he hopes to help immigrants and move immigration reform this way by saying, “It is a nod to one of our greatest strengths ? our unique ability to absorb people from different backgrounds and cultures into one nation under God. To forever remain a shining city upon a hill, a beacon of liberty, and the most hopeful society the world has ever known, America only needs to remember that strength.”