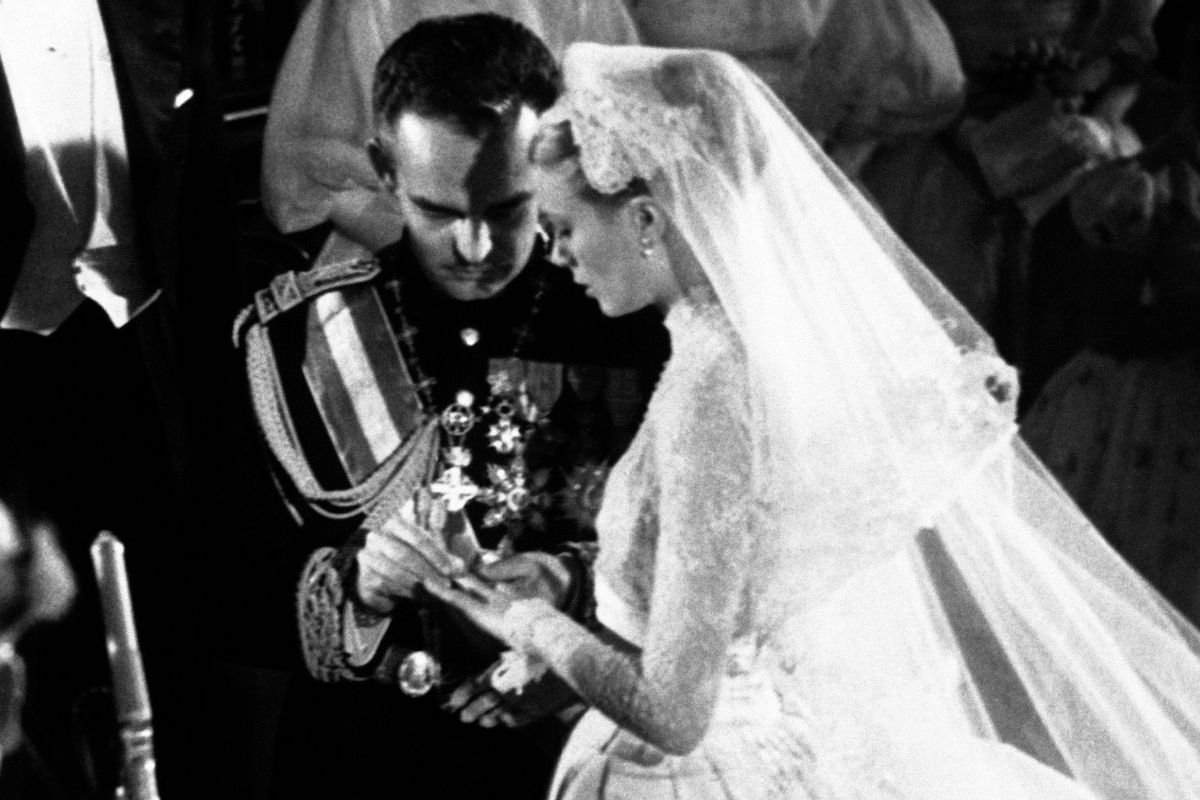 Grace Kelly was one of Hollywood’s brightest stars when she retired from acting at the age of 26 to marry Prince Rainier III of Monaco. Although director Alfred Hitchcock bemoaned the loss of his “icy blonde” femme fatale, Kelly had aspirations beyond the big screen: she was going to be a princess. Her royal wedding in 1956 was watched live by 30 million viewers and was the first event of its kind to generate such a media buzz.

Royal weddings are still a cinematic favorite for fans as we saw recently when another American actress, Meghan Markle, wed Prince Harry. But Princess Grace defined the fairytale. In no small part, thanks to her unbelievable dress. Long before Princess Diana,  and her impossibly lengthy veil, the wedding dress of Prince Grace of Monaco became one of the most recognizable garments in the world.

The Fashion of Grace Kelly

With her blonde hair and elegant attitude, the actress Grace Kelly had a frosty appeal that was instantly noted by the master of suspense, Alfred Hitchcock. His thriller Rear Window, which premiered two years before Kelly’s famous royal wedding, showcased the future princess’s ability to wear the hell out of any dress. (See the clip below.) In a movie defined by stasis, Jimmy Stewart’s daredevil photographer is confined to a wheelchair after breaking his leg ? appearances by his girlfriend Lisa, the dainty-waisted Grace Kelly, charge the film with a sense of motion. Her costumes do the heavy lifting, as Lisa shows up to the apartment overdressed in ravishing gowns and rustling tulle skirts. She’s a ham, too, twisting around and fishing for compliments. “What do you think?” she asks with faux innocence. Looking back, the iconic costumes of Rear Window were a mere warm-up to the ultimate entrance Kelly would make at her Monaco wedding ceremony.

Grace Kelly was recognized with an Academy Award in 1954 for her performance alongside Bing Crosby in The Country Girl. Watch Kelly’s brief acceptance below to catch a glimpse of her riveting Oscars gown, which was heavily tapered and, surprisingly, mint green! (Although the black and white film cannot capture her dress’s unique teal-ish sheen.) The gown cost $4,000 which was a staggering price tag at the time, although Kelly got her money’s worth; she wore the piece not only to the Academy Awards but also at The Country Girl premiere.

The wedding of Grace Kelly and Prince Rainier III of Monaco occurred in two parts. On April 18, 1956, a short civil ceremony officiating Kelly’s new titles was held, followed by a reception for Monégasque citizens. The religious service took place the next day. This church event had all the trappings of both Hollywood glamour and the traditional charm of royal conventions. As such, the star of the show needed a costume that matched the gravitas of the day. More than just a dress, Princess Grace’s wedding gown was an apparatus.

The final product was made from 100 yards of silk net. It included thousands of hand-stitched pearls, a three-foot-long train, and a silk faille cummerbund accentuating the bride’s waist. Although the high neckline of the dress was certainly conservative, the tight lace bodice showed off Grace Kelly’s slim figure. But this lofty appearance required intense underworkings: a slip skirt support a varied foundation of petticoats brought life to the pleats of Kelly’s silk faille dress skirt. These decisions were all a result of careful planning.

Designed by the costume designer Helen Rose, the wedding dress of Grace Kelly was a gift from Metro-Goldwyn-Mayer. MGM Studios had recently produced High Society, Kelly’s final film before committing to life within the Monégasque Royal Family. Rose was chief of the wardrobe department at MGM and had styled for Kelly before, along with the likes of Elizabeth Taylor, Lana Turner, and Susan Taylor. (Work with latter starlets had earned Rose two Academy Awards for costume design.) Kelly trusted this stalwart designer completely as she led 30 seamstresses on a six-week quest to complete the gown.

Grace Kelly forewent typical accessory ornamentations in favor of a more unique princess style. Instead of a tiara, Kelly donned a Juliet cap fastened to her 90-yard (!) lace veil. Unfurling from such an understated headpiece, this surprising veil was embellished with seed pearls and a wreath of paper orange blossoms. Offsetting the extravagance of her whole ensemble, Kelly’s bouquet was simple: lilies of the valley. Clutching this small bunch of buds, Kelly was a multisensory vision when she emerged from a town car at Monaco’s St. Nicholas’ Cathedral on her wedding day.

When the royal bride appeared before the immense crowd on April 19, 1956, her radiant appearance took everyone’s breath away. Being a talented actress, Grace Kelly’s solemn expression during her wedding ceremony reveals her understanding of the royal role. Tears even shone during the ritual; watch the emotional moment here. In becoming a princess, Kelly chose to leave Hollywood forever and accept the ultimate celebrity role. This was an intensely grand procedure. And, thanks to Helen Rose, Kelly looked the part.

Grace Kelly’s wedding dress can be seen today in her hometown, on occasional display at the Philadelphia Museum of Art. Following her 1956 wedding, the actress-turned-princess lived an eventful life as the Princess of Monaco, having three children with her husband and dedicating herself to philanthropy within the small country. Kelly passed away tragically in 1982 at the age of 52, after suffering from a stroke while driving. Prince Rainier III never remarried and was buried beside his wife in 2005.

Watch: Why Marilyn Monroe?s White Dress Was So Iconic