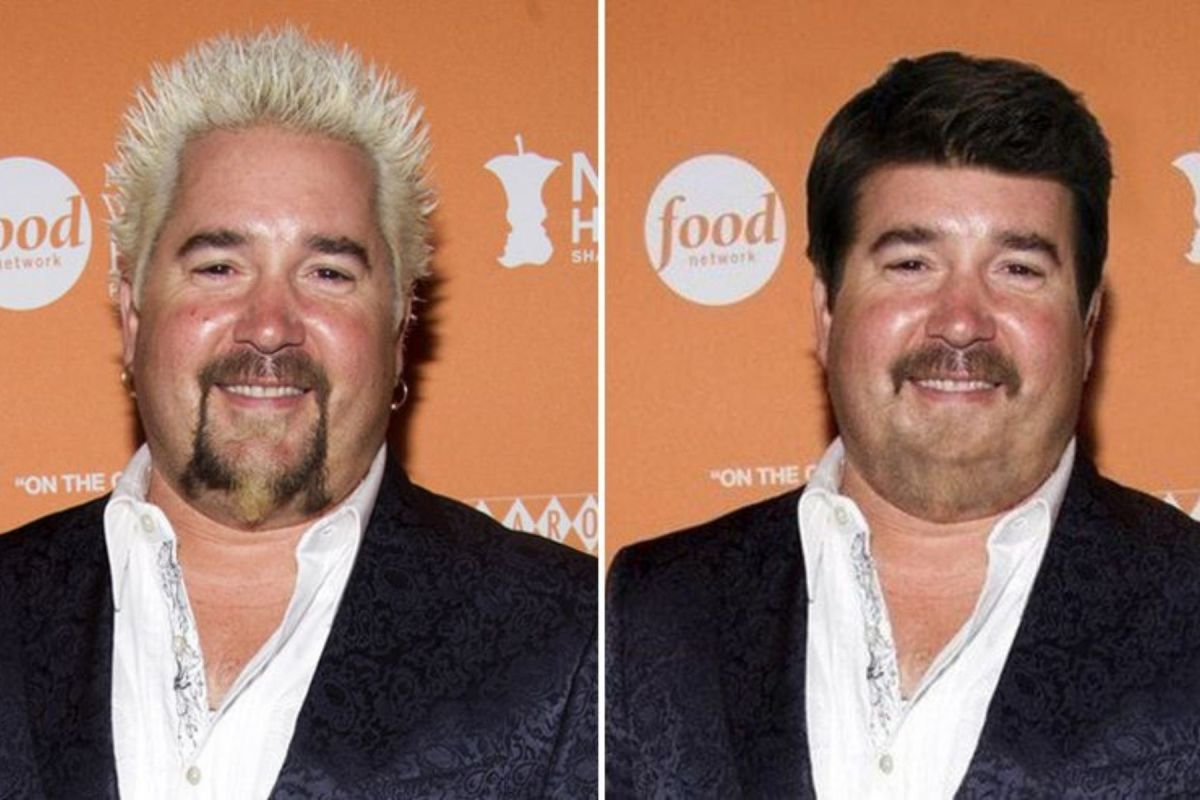 Do you recognize Guy Fieri with normal hair? The host of Diners, Drive-Ins, and Dives — the Mayor of Flavortown! — is an entirely different man without his spiky blonde hair and pointy goatee. Gone are the sharp peaks of his iconic hairdo, the bright bleach yellow replaced with a flat, matte brown… But don’t worry — it’s only photoshop.

here's what celebrity chef @GuyFieri might look like with a "normal" hairstyle, if anyone's into that sort of thing. pic.twitter.com/DGDpyjzYNh

The dark-haired image of Guy Fieri went viral on social media a few years ago and caused quite a stir. As you can see, the Twitter user also blurred out Fieri’s trademark facial hair and little hoop earrings. A travesty! But the circulating pic got us wondering about the evolution of Guy Fieri’s funky and spunky signature look.

The History of Guy Fieri’s Hair

Guy Fieri was not always Guy Fieri. And we mean that literally. The Food Network star was actually born Guy Ferry. He legally changed his surname to honor his Italian grandfather when marrying his wife Lori in 1995. By that point, Guy Fieri was a successful restauranteur operating out of Santa Rosa, California. One of his employees, an aspiring hairdresser, asked to practice on her boss. Bold move. Even bolder though, was her ultimate cosmetic creation which transformed Fieri’s scalp into a peroxide-bombed crunchy creation. The look, like Fieri’s own dishes, blends heartland cliché with American spectacle. It is the Donkey Sauce of ‘dos. The Trash Can Nachos of coiffure.

Of course, we’ll never know exactly what Guy Fieri’s reaction to the makeover was. But I’d bet money that he took one look in the mirror, pumped his fist, and said “Delish!” A few years later, Fieri entered The Next Food Network Star as a relatively unknown contestant — and won. With his unique hairstyle officially televised, one TV exec walked right up to Fieri — so the story goes — and said: ?You?d better get used to that hair color, buddy.?

Lori Fieri, however, is not a fan. The couple met in 1992, long before the Triple-D host was a celebrity chef. She told People Magazine:

?When I first met him, he had no goatee. He had dark hair. He wore a suit to work every day,? she says. ?Now I look at him and I?m like, ?Where?s that man I married with the whole clean look?’?