I’m not going to lie, I’m in awe of how great she looks as Gwyneth Paltrow poses scantily for an Instagram post for her 48th birthday. And it’s pretty obvious that many who commented on her social media, including a ton of celebs sending birthday wishes, that they agree with me.

But one person’s comment stuck out of the thousands that felt the need to not only say happy birthday, but also speak on the fact that she’s wearing absolutely not clothes in this photo, covering herself with her arms and standing a certain way to not reveal everything. And that person was none other than Gwyneth Paltrow’s daughter herself: Apple Martin.

Paltrow and ex-husband Chris Martin, also the Coldplay frontman, share their 16-year-old daughter Apple Martin and 14-year-old son Moses Martin. Now, we all know teenagers are completely submersed in social media. So Apple was a little appalled when she opened up Instagram just to find a selfie of her Oscar winning mother, posing for her amazing brand of new body butter, Goop. Paltrow is the Goop founder and seized the opportunity on her birthday to promote it.

The Instagram caption read, “In nothing but my birthday suit today… thank you all so much for the birthday wishes and thank you to @goop ‘s insanely amazing brand new body butter for making me think I can still get my kit off. ? #goopgenes” and in her brilliant sense of humor as she posted the picture for this particular birthday.

Apple’s comment was simple, but loud enough to express how she really felt about seeing her mom post basically nude photos for the world to see, with a casual, “MOM” with no punctuation or emojis, just all capital letters. The rare photo caught the eye of so many, but I do feel Apple was justified in her reactions. 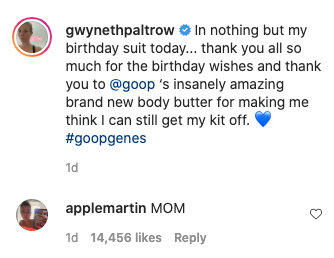 To embrace the human body is one thing, but I’m can’t say if Paltrow and her ex-husband would be okay with their teenage daughter posting a similar pic for her 16th birthday. It’s one of those things about Hollywood, however, that a kind young woman would post a very clearly naked picture in the name of whatever they’re doing it for. Who knew that trending topics garnered so much attention from wearing no clothes? That’s the best wave for marketing I guess.