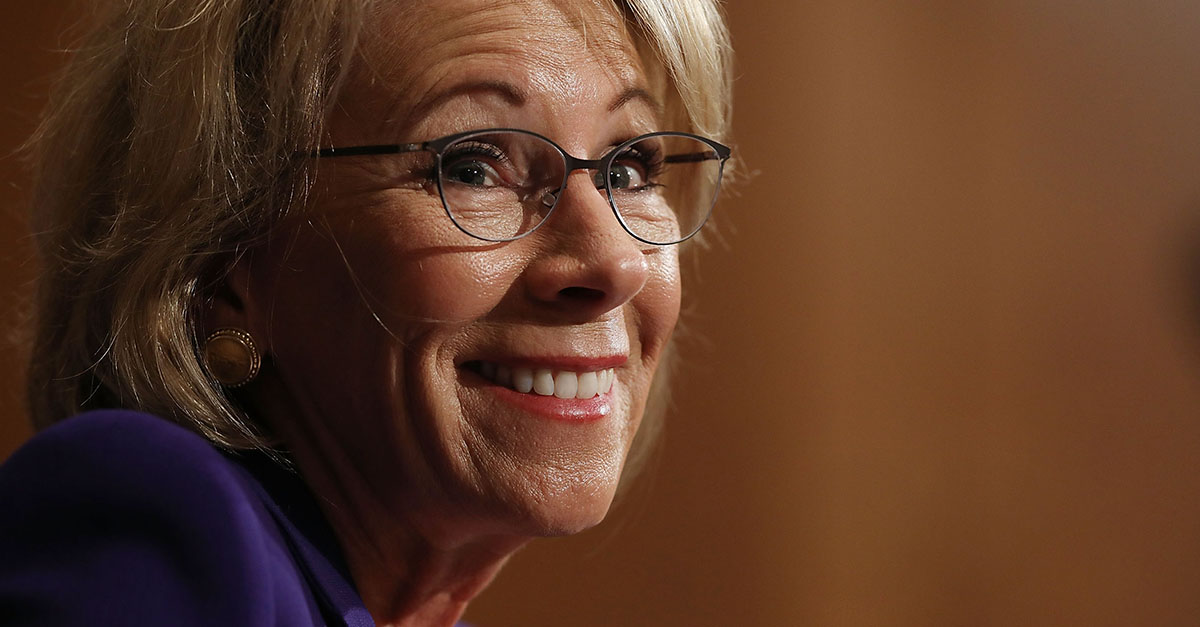 Photo by Chip Somodevilla/Getty Images
WASHINGTON, DC - JANUARY 17: Betsy DeVos, President-elect Donald Trump's pick to be the next Secretary of Education, testifies during her confirmation hearing before the Senate Health, Education, Labor and Pensions Committee in the Dirksen Senate Office Building on Capitol Hill January 17, 2017 in Washington, DC. DeVos is known for her advocacy of school choice and education voucher programs and is a long-time leader of the Republican Party in Michigan. (Photo by Chip Somodevilla/Getty Images)

Once again, Hollywood’s elite have been outspoken about their political views, and this time, Betsy DeVos was under fire.

On Tuesday, DeVos, a billionaire businesswoman with no prior education experience, was confirmed as Secretary of Education after a tie vote from the Senate was broken by Vice President Mike Pence.

RELATED: Elton John reflects back on the friendship he shared with the late George Michael

Following the confirmation, Twitter practically went up in flames criticizing the decision.

Betsy DeVos confirmed. What is also confirmed is that there is not one single man of courage in the Republican Congress.

The DeVos pledge: If your senator voted YES, you pledge to vote AGAINST them in the next election and to donate to their opponent. Please RT

Rejecting DeVos was the GOP's easiest way to say "Mr Prez, let's take this slow, we got 4 yrs". Instead they declared war on our children.

Welp, they confirmed #DeVos. A billionaire with NO knowledge of the public education system is the Secretary of Education.

By the way, DeVos is 100% courtesy of Mike Pence. You think Trump gives a shit about charter schools?

She got in. Anybody want to start a school? On Mars? #DeVos

Yeah, they are not happy.