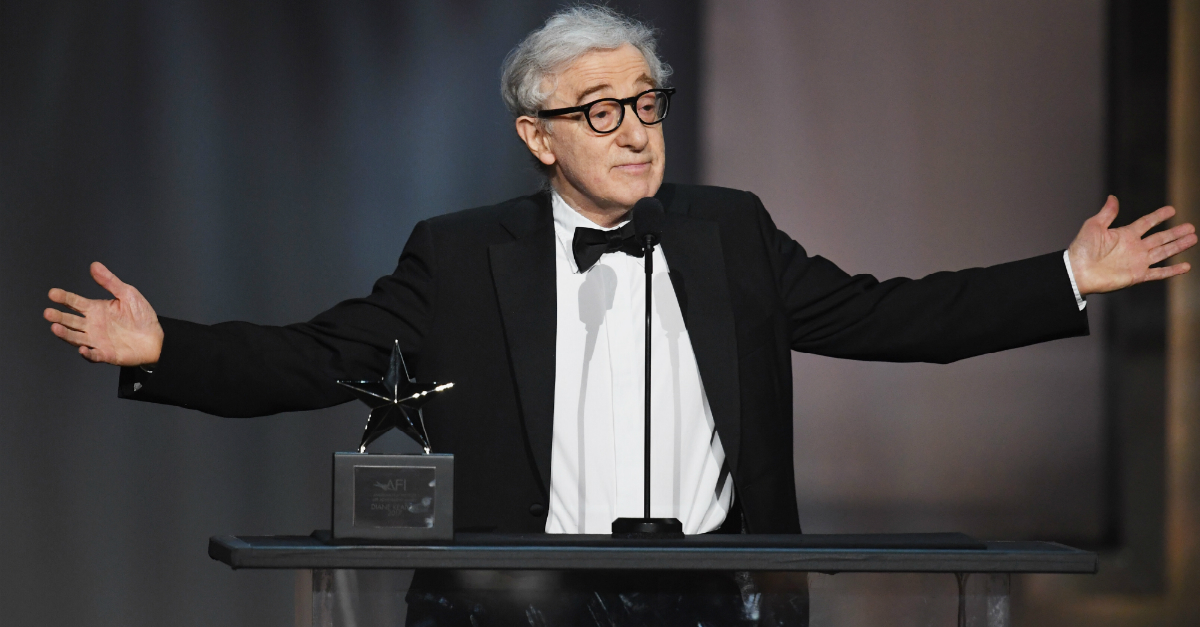 The career of legendary filmmaker Woody Allen could finally be over.

Amazon is reportedly prepared to cancel the release of his upcoming movie “A Rainy Day in New York” after the director was disavowed by several prominent movie stars, Page Six reports.

“‘Rainy Day’ will either not come out or [will] get dumped by Amazon without any p.r. or theatrical release,” a film-industry executive informed the website.

The executive also added that Allen is struggling to find actors willing to work with him on new projects.

“He’s having trouble casting his new film,” they said.

Allen’s adopted daughter, Dylan Farrow, recently joined the #MeToo and #TimesUp movements by sharing her own story of alleged sexual abuse at the hands of her adoptive father, Woody Allen — allegations she initially made sometime ago.

With all of the conversation about alleged sexual harassment in Hollywood, Farrow decided to re-tell her own story in her first TV interview with “CBS This Morning” co-host Gayle King. Farrow previously came forward with allegations against Allen and only recently received recognition when actress Natalie Portman acknowledged her story.

“I felt it was important to add my story to [the #MeToo movement.] Because it was something I have struggled with for a long time,” she said. “It was very momentous for me to see this conversation finally carried into a public setting.”

Farrow said that she is “not angry” with stars who still work with Allen, but she hopes that “they can acknowledge their complicity and hold themselves accountable to how they have perpetuated the culture of silence in their industry.”

She said that she has been telling her story for 20 years and has repeatedly been “shut down, ignored and discredited.”

Farrow first came forward with her account in 1993 in an op-ed featured in the New York Times. She recounted those same details in the interview on Thursday’s broadcast.

“I want to show my face and tell my story. I want to speak out, literally,” she said. “I loved my father. I respected him. He was my hero, and that doesn’t take away from what he did, but it does make the betrayal and the hurt even worse.”

Farrow detailed the story of the alleged abuse to King in the interview.

In the wake of Farrow’s accusations, multiple performers expressed regret at having worked with Allen.

Oscar nominee Timothée Chalamet — who stars in “Rainy Day” — recently announced that he will donate his paycheck from the film to charities for victims of sexual abuse and assault.

“This year has changed the way I see and feel about so many things.” The 22-year-old actor wrote in an Instagram post. He added that 2017 had been an “enlightening education” for him.

“I am learning that a good role isn’t the only criteria for accepting a job — that has become much clearer to me in the past few months,” he added, “having witnessed the birth of a powerful movement intent on ending injustice, inequality and above all, silence.”

His co-star Selena Gomez is reportedly donating her earnings to #TimesUp, as is British actress Rebecca Hall, who has worked with Allen twice, according to Page Six.

RELATED: Things got awkward at the SAGs when Alison Brie was asked about her brother-in-law James Franco