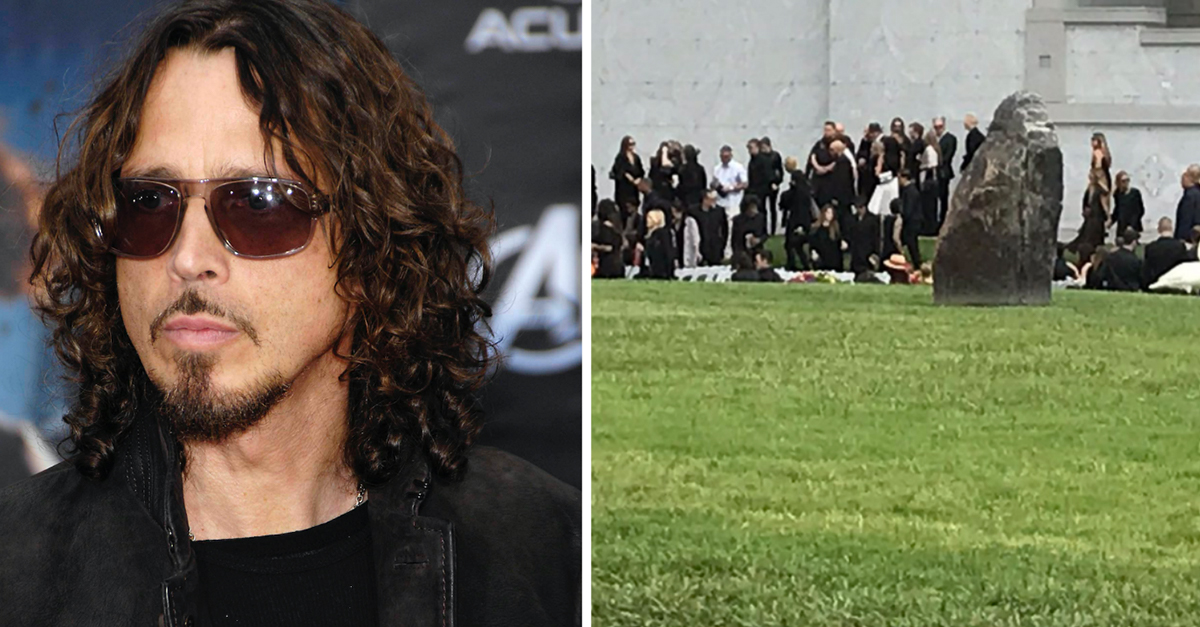 Soundgarden music played from a portable speaker outside the cemetery’s gates as a group of about a dozen fans gathered outside. Chauffeured cars and sport utility vehicles arrived carrying mourners, including Cornell’s widow and his two youngest children, for a private service on the Fairbanks Lawn at Hollywood Forever Cemetery. Rows of white chairs and floral arrangements were set out under overcast sky. Audioslave’s “Like a Stone” played from speakers.

RELATED: Chris Cornell’s wife shared a heartbreaking open letter about her husband days before laying him to rest

Among those who came to pay tribute were Lars Ulrich and James Hetfield of Metallica, and Dave Navarro of Jane’s Addiction.

The service will be followed by a public memorial and viewing of Cornell’s final resting place at 3 p.m.

“I feel like this is just as big as the death of Elvis or John Lennon. That’s why I had to bring my son,” Andrade said. “There will never be another. He’s a modern day Freddie Mercury. I needed some closure on this.”

Cornell, 52, was pronounced dead May 18 after he was found unresponsive in a Detroit hotel room hours after performing a concert with Soundgarden. Coroner’s officials released say preliminary autopsy results show the singer hanged himself, but full toxicology results remain pending. The singer’s family has disputed the findings and claim Cornell may have taken more of an anti-anxiety drug than he was prescribed.

The Seattle native was a leading voice of the grunge movement in the 1990s. Besides Soundgarden, he scored hits as a solo artist and with bands Temple of the Dog and Audioslave.

He is survived by his wife and three children.

Vicky Cornell penned an open letter to her husband that was posted online by Billboard on Wednesday in which she promised to fight for him and take care of their children.

“We had the time of our lives in the last decade and I’m sorry, my sweet love, that I did not see what happened to you that night. I’m sorry you were alone, and I know that was not you, my sweet Christopher. Your children know that too, so you can rest in peace,” she wrote.