Hugh Grant’s Son Once “Stabbed Himself in the Face” 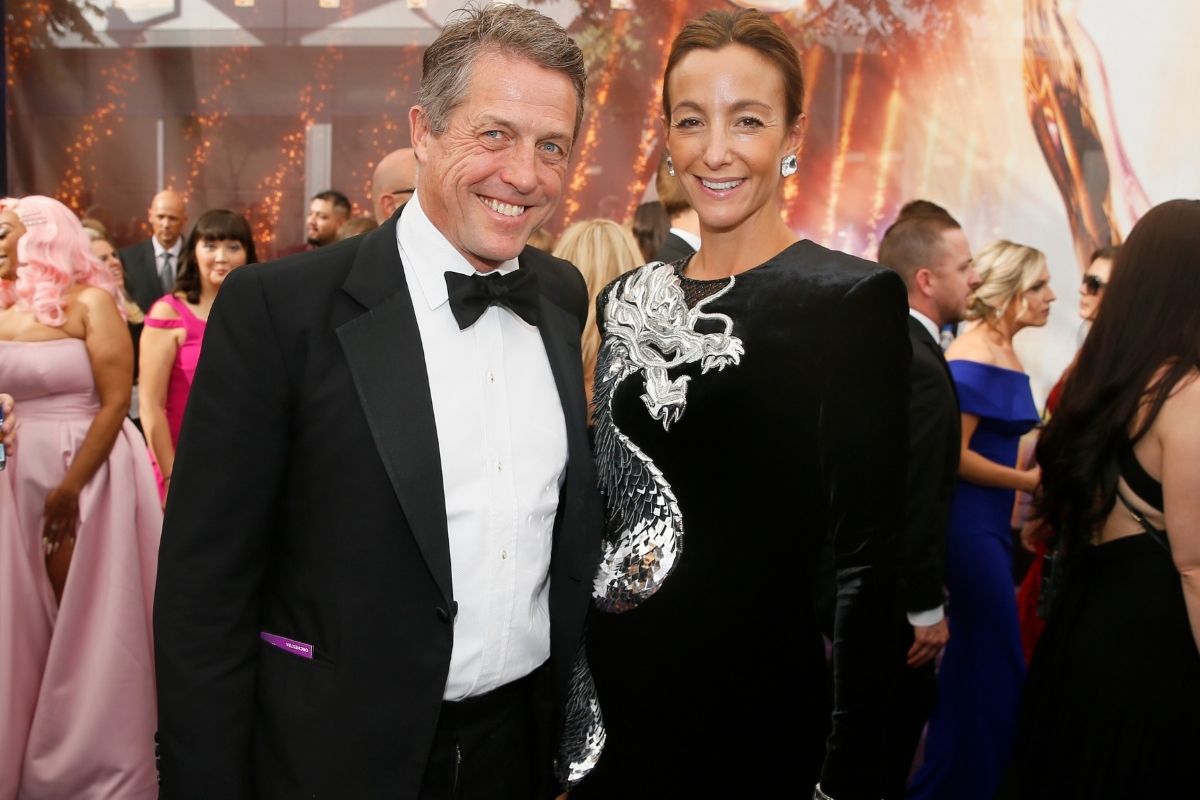 Last week Hugh Grant shared a disturbing detail from his family life. While speaking to Music and Lyrics co-star Drew Barrymore during an at-home interview, Grant said his young son “stabbed himself in the face” with a pen after becoming frustrated during a homeschooling session. Yikes. Grant said the young tutors he hired don’t know what hit them. “Ghastly,” he called the strange situation.

As if The Undoing wasn’t creepy enough, the entire conversation made us wonder more about the private life of this seemingly charming Brit.

Hugh Grant was born in 1960 and was raised in west London, attending school in Hammersmith. In 1979, he attended the New College in Oxford on scholarship. It was there that Grant began dabbling in the arts and acting in stage productions. He began to gain recognition in England through roles in the E.M. Forster drama Maurice and as Frederic Chopin in Impromptu. In 1992, Grant appeared in the Roman Polanski film Bitter Moon. But it was Four Weddings and a Funeral in 1994 that secured Grant’s stardom and type-cast the actor as the ultimate, bumbling romantic comedy dream boat. Not that we’re not complaining.

Four Weddings and a Funeral became the highest-grossing British film to date! The following year, Grant starred in Sense and Sensibility… then Notting Hill, Bridget Jones’s Diary, About a Boy, Love Actually, and my personal favorite, Music and Lyrics. But in the past few years, we’ve seen a marked shift in the sorts of characters that Grant portrays. In Florence Foster Jenkins, he starred opposite Meryl Streep as the historical figure St. Clair Bairfield. In Paddington 2 — which, I must say, is extremely underrated and totally adorable — Grant showcased his surprising ability for villainy and narcissism. Most recently, Grant’s turn alongside Nicole Kidman in the HBO drama The Undoing was absolutely chilling. Playing Jonathon, a highly successful New York sociopath, Grant shocked fans with deadly charm.

Hugh Grant joked to The Daily Telegraph last year that he’s getting “too old and ugly” to continue playing romantic leads. We disagree, of course. After decades watching Grant deftly deliver easy one-liners and mawkish love monologues, this serious — and gray-haired — career chapter is tough to get used to. But those who were aware of Grant’s salacious personal life might have sensed there was a darker side to this captivating celeb.

In 1995, Hugh Grant was arrested in Hollywood during a police vice operation; Grant had been receiving oral sex in his car from a Sunset Boulevard sex worker named Divine Brown. He pleaded no contest, was fined $1,180, and put on a two-year probation. Speaking to Jay Leno soon after the incident, Grant said, “I think you know in life what’s a good thing to do and what’s a bad thing, and I did a bad thing. And there you have it.” Watch the highly anticipated, and slightly awkward, interview above.

Grant met the actress Elizabeth Hurley in 1987 and the couple dated for 13 years. Their high-profile relationship ended in 2000, but Grant is godfather to the son of his ex-girlfriend, Damian, who was born in 2002. Grant himself did not marry until 2018, but has five children with two women. In September 2011, he had his first child, Tabitha, with Tinglan Hong, who’d been the hostess at a London Chinese restaurant. Grant’s publicist described their relationship as a “fleeting affair.” However, here’s where things get complicated.

In September 2012, Grant’s girlfriend, the Swedish television producer Anna Eberstein, gave birth to his second child: John Mungo. However, Tinglan Hong was also pregnant again. With Grant’s third child. In December of that same year, Hong gave birth to their son Felix. The sons are roughly four months apart in age. But this uncomfortable utero overlap did not end Grant and Eberstein’s relationship. In December 2015, they had another child together, a girl, and then another girl in March 2018. Grant and Eberstein then married, just months later, on May 25, 2018. The names of Grant’s fourth and fifth child, the younger daughters, have not been released.

According to The Sun, the British actor purchased a six-bedroom semi-detached home in London’s Chelsea neighborhood around the time of his wedding to Anna Eberstein. Currently, the Grant family is residing in Turkey while Grant shoots a new movie on-location. This is where the “ghastly” incident involving his son’s “self-harm” in front of a tutor took place. It’s unclear to what extent Grant’s two Hong children live with him. The actor generally tends to keep details about his family life to himself. Honestly, we can understand why.